With almost 19 years of sidewalk chalking experience behind him, "Chalkmaster Dave" Johnston really is a master at his craft. It's become hard to imagine the southwest Yonge and Dundas street corner without his painstakingly detailed, larger-than-life illustrations of superheroes, da Vinci paintings, and video game icons.

The palms of his hands are black as coal, and his clothes are permanently spotted with multicoloured dust. Chalkmaster Dave takes sidewalk art to the extreme, often drawing a crowd as large as the picture he so meticulously creates. He always completes his drawing in the same day. While good enough to hang for years on a wall, most of his pieces survive only a couple days at best, before fading away with footsteps or washing away with rain. 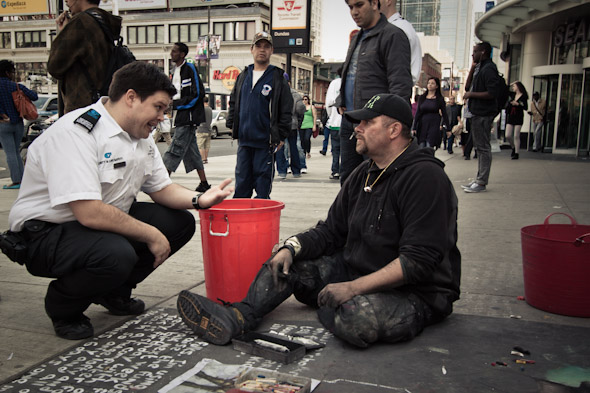 Fans of the legendary artist were troubled when the Eaton Centre H&M recently threatened to kick him off his corner. After speaking with Dave, however, I found that he's probably there to stay, and admirers of his work needn't worry. Easygoing and affable, Dave was also willing to share a bit of his story.

Where did you learn to chalk?

I just started doing it on the sidewalk one day. Time progressed, and basically as the old adage goes, practice makes perfect.

What do you usually draw pictures of?

I draw superhero stuff, classical art, video game culture art. I like to draw things more photo-realistic rather than cartoony. 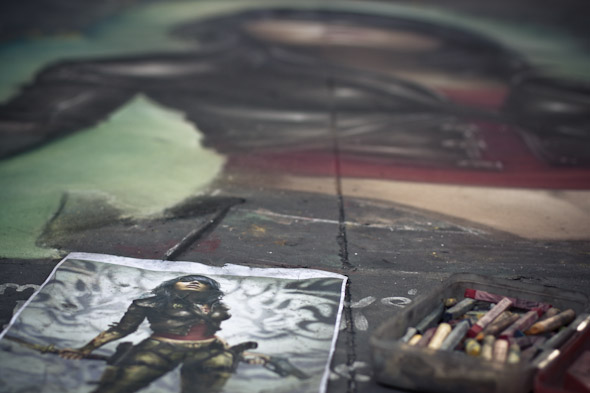 Why do you do what you do?

I enjoy it. It's a lot of fun and a half-decent living. It's the only job where, every two to three months, I can take a week off and go visit my daughter in Halifax, and still make a living as an artist. It's a little humbling sometimes, but I'm doing what every artist wants to do -- make a living with their art.

Given the nature of your art, do you ever become really attached to your work despite how short the lifespan is?

Yes and no. My attachment to it is no different from anyone's attachment to anything. It's here for a moment, and it's gone. Everything you know and love is going to be gone one day, so I try not to hold onto it like it's something I own, but something I'm sharing. People support me, and it's very symbiotic.

About two weeks ago, H&M was complaining about me and the exact words from the manager were that I was "offending their conservative clientele. " I thought that was kind of ridiculous. That day they called security, and security asked me to leave. I didn't object, but I told them that we had to find out where this property line was. I left quietly and maturely and responsibly and went down to the south end.

Later on that day, security came back out and said, "You're absolutely right. You are allowed to draw there, they were wrong." I moved back up, but H&M started complaining again.

The manager of security finally said, "You can't be here, this is the property line." I'd been told three different things, so I decided I was going to stay until things were figured out. So now we're just trying to figure out where the property line is. Hopefully we'll work it out on our own. It seems a bit much to get the police and the media involved. 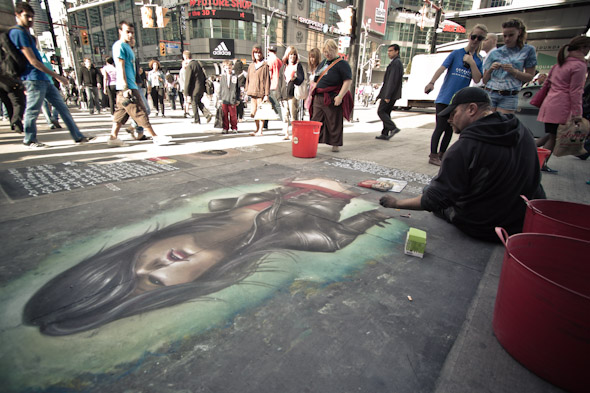 What do you do when you're not chalking?

I'll walk my dog, I'll write a letter to my daughter. Sunday night, I'll go out for a drink. I like to cook, I like to watch South Park. I'm about as normal as normal gets. There's a misconception among some people that maybe I'm some homeless guy. I'm not. I'm pretty much like anybody else, but I have an odd living.

How long have you been chalking?

I started when I was 21, so it's been almost 19 years. I've been at Yonge and Dundas four or five years at least.

Where else do you chalk around the city?

I used to chalk up at Yonge and Bloor, but I'm not allowed to do that anymore because Hudson Bay owns the whole sidewalk now. I used to draw at Yonge and Eglinton, but there's not enough space there anymore. I also used to do Queen West, and it used to be great down there, but it's not what it used to be. The dynamic has changed completely.

Now I'm just left with Yonge and Dundas and down by Harbourfront. It's tough because I'm running out of spaces to draw. There aren't many left that I can make a half-decent living at.

I like Yonge and Dundas; it's my home...my stomping ground, I guess. I know the staff around here, the local cops. It's great, so I don't want to lose it. And of course, tons of people walk by here all the time. It's as good as I can get. And when you rely on the weather and stuff like that, you need a place like this.

Are there a lot of sidewalk chalkers like you in the city?

There aren't many. There's one that I'm kind of apprenticing; she's working in the south end a lot under the moniker "Chalk Chick." Hopefully she'll be the next Chalkmaster, because someone's going to have to take over. 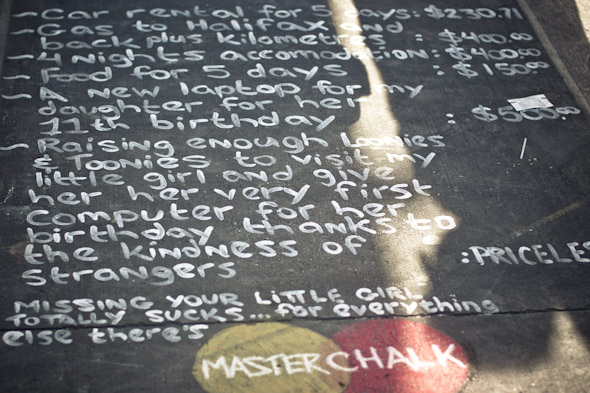 Is there anything else you'd like people to know about you?

If I could just convey one thing, it's that I totally appreciate all these loonies and toonies people give me, and I try to spend them wisely. They allow me to live my life in the way that I want. I have no education, and everything I've learned is from practice, and screw-ups, and moving on. I could never have done it without the support of Toronto.