The four corners of the Yonge Street and College/Carlton Street intersection are one of my favourite places in Toronto. As an immigrant and former suburbanite, I feel naturally drawn to places that constantly boom with life and remain bright throughout the day and night.

Historically, this meeting place of three thoroughfares has been a vital piece of the cultural and economic life of the city, due mostly to four important landmarks that reside nearby, of which unfortunately only three survive. They are College Park, Maple Leaf Gardens, the long gone Odeon Theatre, and the former Independent Order of Odd Fellows Hall.

It's no coincidence that this intersection turned out to be one of the cultural hubs of early 20th century Toronto. During this period, the urban population resided within what Torontonians now consider downtown, while the population outside of the city limits lived in the so-called streetcar suburbs(like North Toronto and Bloor West Village, for instance). The crossroads in question were served by two major streetcar lines, Yonge and College/Carlton, two routes that extended well beyond the urban fringe, and provided direct access to the city and its attractions.

As their names suggest, College and Carlton were originally laid out as two separate streets, but traffic traveled with relative ease from one side of Yonge to the other, albeit with some delays. A photograph taken in 1912, for instance, shows that the streetcar on Carlton, heading west to College, would have had to take a sharp turn while crossing Yonge in order to finally arrive on the other side of the intersection. According to Mike Filey's Now A One-Horse Town: 125 Years of Toronto and Its Streetcars, in 1931, several buildings were demolished in order to ease the flow of traffic by connecting College directly with Carlton, east of Yonge. 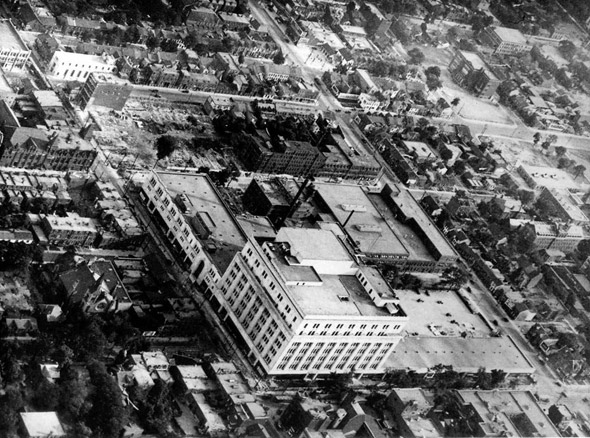 The above photograph depicts an aerial view of the intersection in 1930, before College and Carlton were connected as a continuous road running east-west. College Park (originally known as Eaton's College Street) is the dominant landmark on this picture.

College Park
This Art Deco/Art Moderne structure was constructed between 1928 and 1930, and financed by T. Eaton Co. Ltd. Originally, Eaton's planned to move most of its manufacturing and retail operations from their factories and flagship store located at Queen and Yonge Streets. This reasoning inspired the original plan for the College Street site, which envisioned 5,000,000 square feet (465,000 square metres) of retail space and a 38-storey skyscraper.

However, faced with the new economic reality imposed by the Great Depression, the company was forced to scale down the original plan. As a result, only the first phase of the project was completed, a department store of 600,000 square feet (56,000 square metres), along with the Seventh Floor (now famously known as the Carlu), which contained a restaurant and a theatre. The opening celebrations took place on October 30, 1930, when Lady Eaton, and her son, John David Eaton, the future president of the family company, opened the new location, which specialized in furniture and housewares. 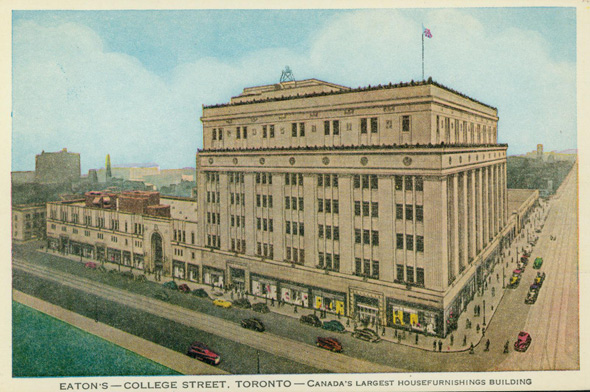 This image shows College Park most likely sometime in the 1940s or the early 1950s, judging mainly from the fact that the tracks that carried the Yonge streetcar are still visible. This route ceased to operate shortly after the opening of the Yonge subway line in 1953. 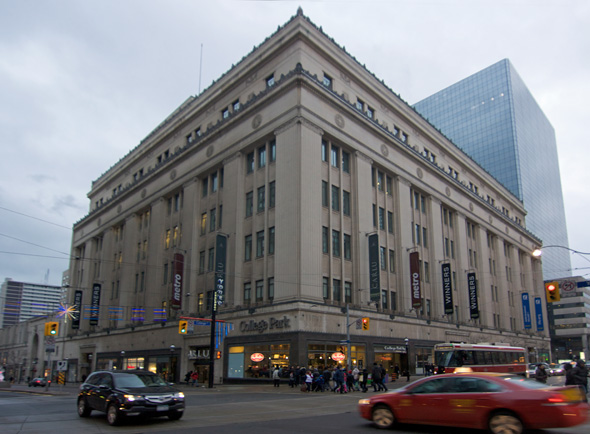 The opening of the Eaton Centre in 1977 at Queen and Yonge signaled the end of Eaton's dominance on College Street. The building was sold to new owners, who gave the former site of store of the retail giant its new name, College Park. Today, it is recognized as one of the finest examples of Art Moderne in the world. 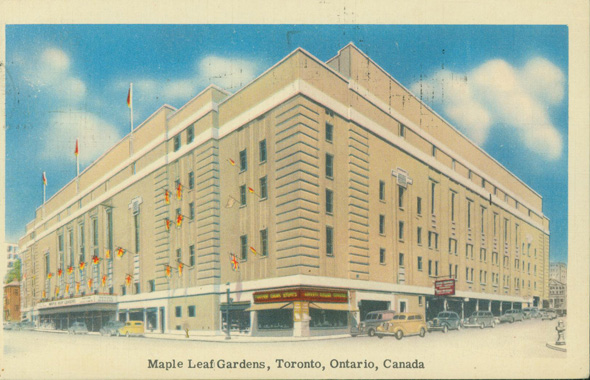 Maple Leaf Gardens is another important landmark close to the intersection, residing one block east at Carlton and Church Streets. Although it was officially opened on November 12, 1932, 1,300 men were needed to raze the dozens of small, mostly residential structures that stood on the grounds of the future sports facility. 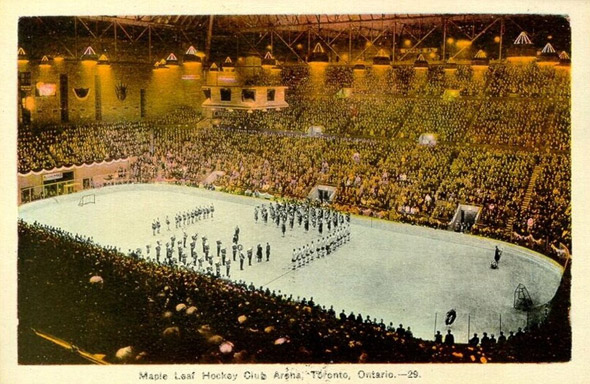 These workers must have been quite grateful for being employed during the Great Depression, since when the budget set aside for the payroll was exhausted, they received only 20 percent of the wages that they were owed for their work. Moreover, their wages were not paid in cash, but in common and preferred stock in the new structure. After the opening of the Gardens, the stock dramatically increased in value, and many of the former underpaid employees became wealthy. What is not surprising, at least now, is the Leafs lost their first NHL game in their new home, and did not become victorious until November 28 of that year.

For nearly sixty years, Maple Leaf Gardens was a cultural centre of the city, showcasing not only hockey games, but also featuring appearances of politicians (Winston Churchill), musicians (the Beatles), and "curiosities" (the Dionne Quintuplets). 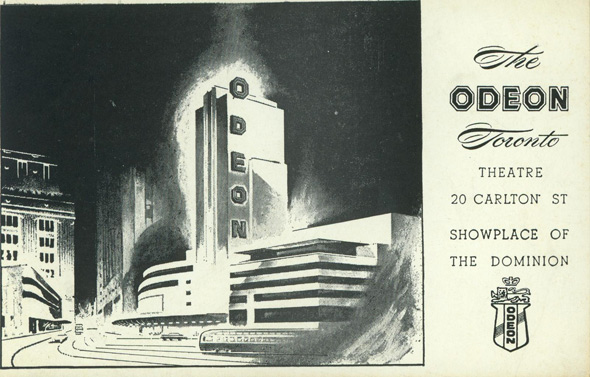 The Odeon Theatre, portrayed on the postcard above, was located at 20 Carlton Street, just a bit more than half a block away. It was opened in 1948 by Odeon Theatres Canada. As the card proclaims, it was in fact famous as the "showplace of the Dominion." 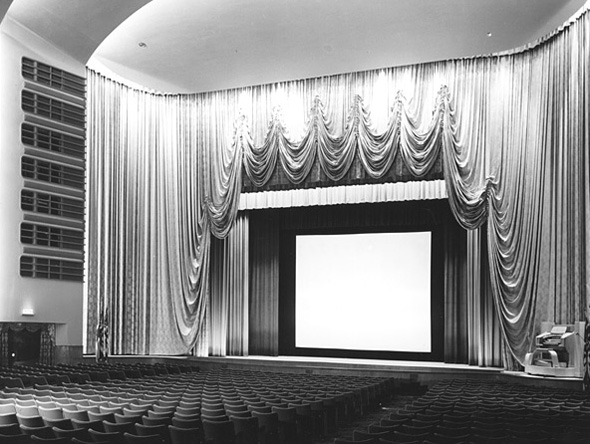 According to Cinema Treasures, the theatre had two lobbies, one on the main floor and the other on the balcony. A magnificent staircase led to the second floor, which housed a restaurant, providing a view of the main floor. It was closed in 1973 and subsequently demolished to make way for an apartment complex. Ironically, a movie theatre, was part of the new structure, but the Carlton was closed down a few months ago, on December 6, 2009 (though there are now plans for a re-launch). 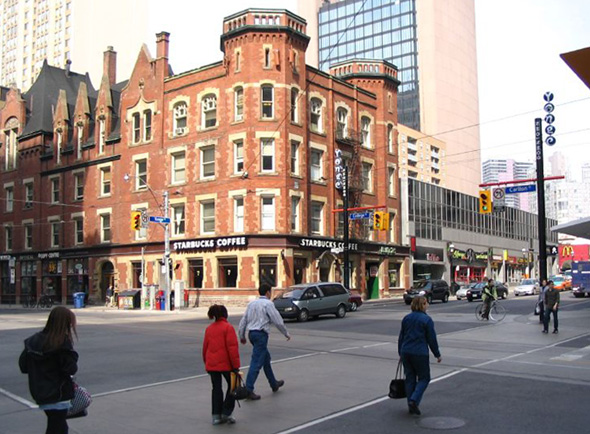 Another intriguing structure is located at the northwest corner of the intersection. The former Odd Fellows Hall, set in the Gothic Revival style, was designed by the architectural firm of Norman Dick and Frank Wickson, and erected in 1891. The Odd Fellows were a charitable and fraternal organization, whose membership extended to skilled workers employed in trades. It originated in Great Britain in and its purpose was to provide financial assistance to its members during times of need.

In 1931, the building was sold to Dominion Realty Co. Ltd., which renovated it and altered the main floor to accommodate a bank. In 1971, the city council adopted the structure into the city's list of heritage buildings, but it did not receive heritage protection status until 1997. The former hall has been well adapted to house a variety of restaurants, offices, and services, and remains one of the most distinctive examples of old Toronto architecture.

All of the dates mentioned above show that throughout the early to mid twentieth century, the area of Yonge and College/Carlton experienced its heyday. Not being alive at the time, however, I can only offer this as an hypothesis. And yet I still find it possible to imagine that the Torontonians of that time must have been proud of the two city blocks that offered so many attractions in very close proximity and that were housed in such picturesque and postcard worthy buildings.

Image credits: Postcards of College Park, the Odeon Theatre and of the exterior of Maple Leaf Gardens are from the author's collection. The interior of the Odeon Theatre circa 1945 is from the Archives of Ontario (I0012842). All other images are sourced from the Wikimedia Commons.