If you've ventured down to the Entertainment District lately, you'll have noticed that it's looking less like a mess of clubs and bars, and more like a burgeoning residential neighbourhood. Go to Councillor Adam Vaughan's navigable map of the area, and you'll see there are a large number of projects being constructed: the luxury hotel/condominiums Shangri-La and Ritz-Carlton, the TIFF Bell Lightbox and Festival Tower, and several standard condominiums like M5V, Charlie and 300 Front Street West.

Emblematic of this ongoing conversion is the Boutique Condos. When the building was originally proposed, it was designed to be built in two phases of 17 and 20 stories. In 2007, however, the developer (Urban Capital) asked to boost the 20 storey tower to 35. Although the city denied the request, the Ontario Municipal Board (OMB) ruled in favour of the development, citing the nearby approved Shangri-La as a precedent. 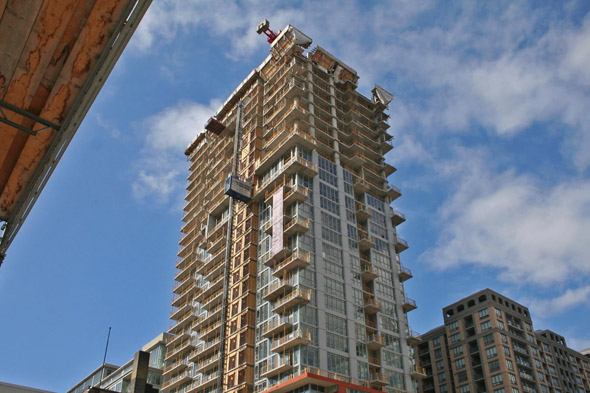 But with more towers comes more precedents, which is encouraging a further transformation of the Entertainment District from mid-rise to high-rise. A 45-storey condo that is being proposed for the parking lot next to the Royal Alexandra -- and is being fought by city staff for being too tall -- is already citing the nearby Boutique Condos as a precedent.

From an urban fabric standpoint, the construction of the Boutique Condos has some positives: it transforms a relatively large parking lot into a residence with retail at grade, and it makes an attempt to fit into the brick warehouse character of the neighbourhood. (The building next door is a Toronto Hydro Substation that is, itself, trying to fit in.) 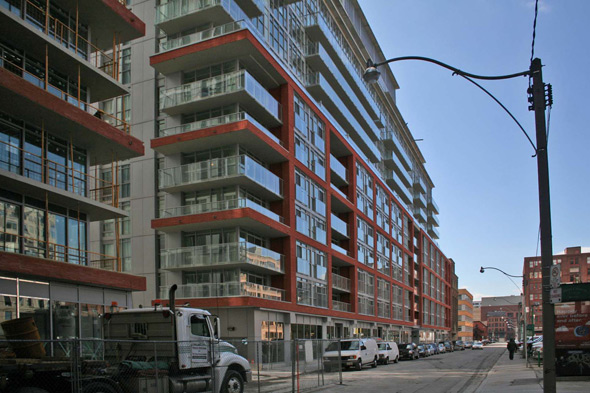 And the new condo residents will increase the strength of the King-Spadina Residents Association. This group has been trying to put a cap on the clubs in the Entertainment District, due to what they call "unacceptable levels of violence and criminal activity, massive levels of drunk and disorderly patron conduct, and pervasive noise." At a more basic level, the loss of more parking for the Entertainment District will likely mean higher parking rates for bar, theatre, and club-goers.

Although city enthusiasts might appreciate these aspects of Boutique, it is also emblematic of a potentially problematic trend: the incredible shrinking condo. Boutique's smallest unit is approximately 400 square feet, which is about as small as condos get in Toronto. While the smaller units were priced in the mid $150,000 range when it was in pre-sales, a 500 square foot condo in the building will now cost you upward of $300,000. 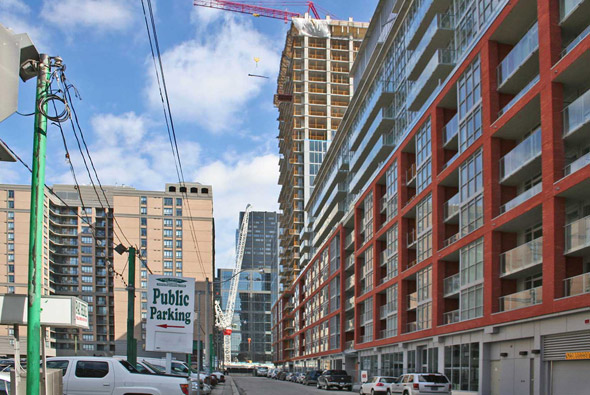 Boutique Condos is not a landmark building, but its development represents many of the dynamics that are occurring in Toronto. And Toronto's future urban fabric and success will be determined based on how we build these residential structures, and whether the choices we make now are the right ones in the long run.