A force for good or evil? Peter Freed's Toronto

I've already reported on how, despite some people's wishes, the Entertainment District continues to reach skyward. On the west side of Spadina, however, there's a more sedate form of development occurring: mid-rise, focused on design, and potentially more in-tune with the surrounding buildings and city council's plans. Is the King-Bathurst area getting development right? Not necessarily -- and its problems highlight the difficulties that even the most well-meaning developers have in bringing quality projects to Toronto.

What's probably most interesting about this area is that many of the buildings are being built by one developer, Peter Freed. Since 2004, he's launched nine projects in the area. Before the announcement of his latest project -- the Thompson Residences on King West -- Freed's developments (Fashion House, 75 Portland, 650 King Street West and 550 Wellington West, among others) have already added 1,600 condo units to the neighbourhood. His developments have helped make Downtown West the fastest-growing area for new real estate in Toronto.

With so much development, there have been losses. Crangle's Collision, an art-deco auto repair shop on Bathurst, was partially demolished. A portion of its exterior has been incorporated into the new Thompson Hotel, which is connected to the condos at 550 Wellington Street West. Fashion House will incorporate (and restore) the Silver Plate building, but several warehouses behind it will be torn down. And the new Thompson Residences will replace the Travelodge on King Street West, whose 50s motor-home vibe was a bit of a sore thumb, despite mention in the New York Times by the Frugal Traveler, who stayed there a few years ago. 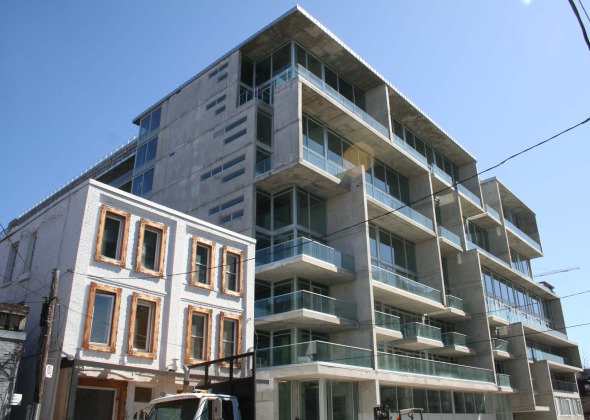 This is clearly one of the major effects of this Freed-based transformation: the rise in property prices. Unlike the similarly mid-rise St. Lawrence market neighbourhood, Freedville beckons deep pockets. Some of the smaller condos are in the $180,000 range for 600 square feet (a relative bargain), but the largest go for millions and more.

This will likely only intensify over the next few years. The Thompson Hotel is the first international outpost for the very upscale New York brand, and it's expected that when its bar and restaurants open in the next month or so, it will attract a lot of wealthy people.

The focus of the Film Festival, for instance, used to be Yorkville, but with the opening of the Bell Lightbox, many of the industry's power brokers will want to cluster and mingle in the neighbourhood.

Property prices don't have much room to grow before they become astronomical. According to Realnet, Downtown-west is the fifth most expensive place to buy a suite in the city, after Bloor-Yorkville, the Downtown core, St. Clair and Yonge and the Central Waterfront. It appears that we can have mid-rise, design-based development in the downtown area, but the question is -- at what cost?