Although it's still in beta, the TTC Trip Planner has gone live and is ready for customer use. News that the planner was set to launch broke about a week and half ago and shortly thereafter an unofficial version temporarily appeared online.

I've been tooling around with the official planner over the course of the evening, and its been spitting out some, let's say, "interesting" route recommendations. When punching in a trip from Christie and Dupont to Queen and Leslie, for instance, I received a suggestion to walk up to Davenport and take the 127 across to Spadina Station.

Although the 127 runs a tad more frequently than the Dupont 26, something about this seemed strange. I soon realized that I'd left the "walking distance to/from my stop" option at the default of 500 metres. When reduced to 250, it suggested the more logical option of waiting for the bus that required no uphill walking.

Okay, I don't expect that the planner will take topography into account when providing route suggestions, but the developers should know that, all things considered, people tend to want to embark from the stop nearest to them. In certain areas, that'll be 500 metres away, but for many it'll be 250 or less.

So why does it default to the longer distance? In this case, it's not as though I'd be saving an abundance of time trudging up to Davenport (although, to be fair, the recommendation is made based on frequency of service).

Another issue my cursory look revealed was how confusing the itinerary summaries can be. Although technically correct, they appear to mislabel subway stop destinations mid-route. 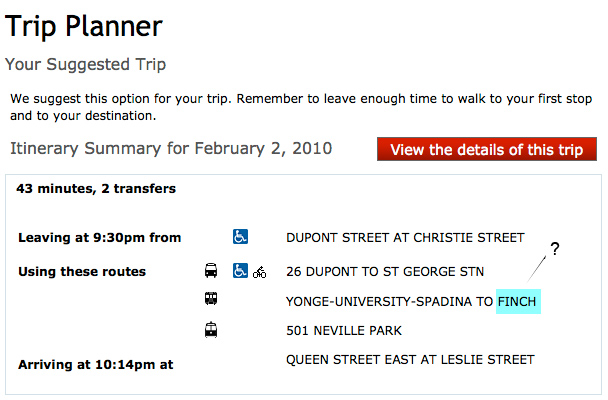 In the above example, it initially appears as though the planner is telling the rider to take the subway to Finch Station. In reality, the reference to Finch is directional, informing the rider of which train to select once he arrives at his subway transfer.

Though this may be obvious to some, I suspect that it'll cause a bit of confusion for more than a few users. In my experience, people tend to think more in terms of north/south and east/west when determining which subway they'll be taking.

Neither of these are major problems. And should they prove as problematic as I fear, a fix would be very easy. But, all in all, my first impression is that the planner is clumsy and not always logical/fully informed in its route selection.

Perhaps more troubling is that the trip planner is not mobile browser-friendly. In fact, this beta release renders quite wonky on the iPhone (see below). The TTC has said that they have intentions to develop a mobile application trip planner down the road. 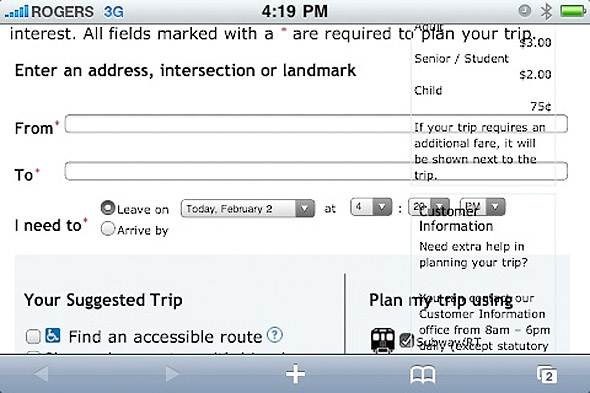 Admittedly, I've yet to devote enough energy analyzing it to pass judgment with complete confidence. Over the coming days I'll keep plugging away in an attempt to get a read on just how useful/problematic the program is. In the meantime, I'd love to hear what other users have to say (the TTC has, after all, released this beta in hopes of getting user feedback that can be used to make necessary improvements).

Are you pleased with this version of the planner? Are there improvements you'd make? Has it spit out an odd route that you'd like to share?