If you've driven or walked along Richmond Street East lately, you've probably noticed it: a strange grey and white cube. The building looks like it has been plonked here from Europe, or perhaps, crashed here from outer space.

The building is the 60 Richmond Street East Housing Co-operative, and it's one of the first purpose built co-operatives to be added to the city in years. It was originally planned to be standard low-income housing for 59 residents from Regent Park who were having their home demolished in the current revitalization, with an additional 26 units for other people who needed affordable rental housing. However, city councillor Pam McConnell encouraged the city to make it a co-operative. 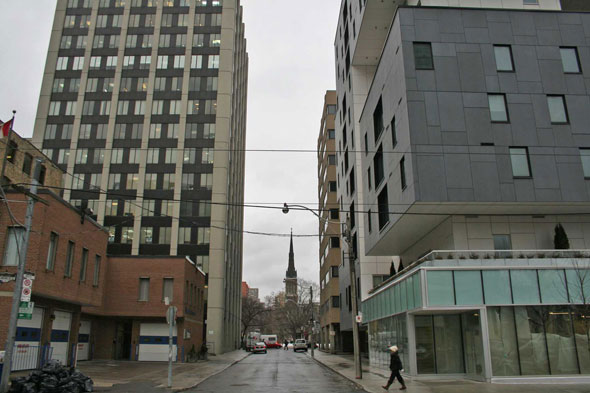 As a result, the Toronto Community Housing Corporation (TCHC) partnered with the Co-operative Housing Federation of Toronto (CHFT). Since CHFT had planned to work with UNITE HERE local 75, a hospitality union, the decision was made to make the building a housing option for low income downtown hotel workers.

In 2006, TCHC chose Teeple Architects for the design of 60 Richmond after a standard RFP. The choice of Teeple was part of a concerted move by the development head of TCHC, Mark Guslits, to improve the architectural image of the corporation and the city as a whole. "We happen to have people here at the corporation who really, really like good architecture, so we just decided we would push architectural excellence."

The design Teeple produced for 60 Richmond won a 2007 Canadian Architecture Award of Excellence. 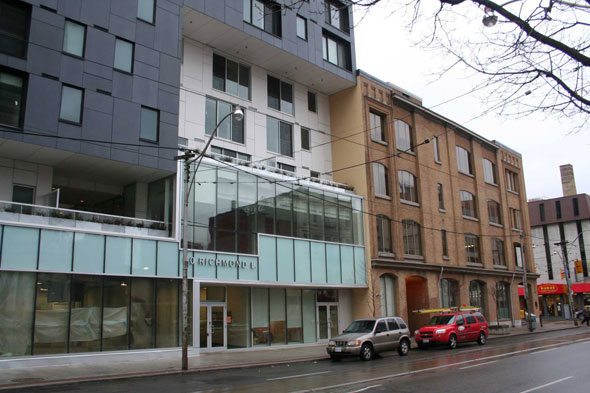 As well as being visually interesting, the design is environmentally forward-thinking: it was built to receive Leadership in Energy and Environmental Design's (LEED) Gold rating. The building will feature a large cistern to capture rainwater. The cistern will help irrigate the building's green roof and green walls. Food from the green roof, such as plants and herbs, will be used in what is planned to be a restaurant on the ground floor, and that will be staffed by some of the building's residents.

Still, 60 Richmond poses some questions. Can the building's complex ecosystem be maintained for years, or is it just a trendy design addition? How many former Regent Park residents will eventually move into the building? Some of the more unusual design elements also seem questionable. For example, one of the judges of the Canadian Architecture Award of Excellence pointed out that even the design drawings show that there is a "certain gloom at the lower, deeper levels of the internal courtyards and north facade where daylight only dimly penetrates." 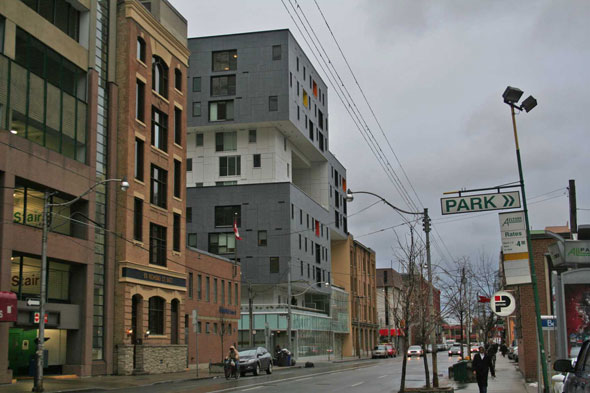 Nevertheless, the building is visually interesting, provides more affordable housing for the city, and is moving in the right direction for environmentally sustainability. All of these things are a lot more than many condo makers can boast.

Unfortunately, if you are a hospitality worker who was interested in living here, you are out of luck. The building does not currently have any vacancies.