The municipal government has released the results from an extensive survey that compares the state of cycling in the city 1999 and 2009. Conducted by Ipsos Reid, the study paints an ambiguous picture of two-wheeled transportation in Toronto.

Although overall cycling participation has increased six per cent since 1999, and 72 per cent of respondents think that the quality of routes and infrastructure has improved, there remains dissatisfaction. Unsurprisingly, one of the key areas earmarked for improvement is increased bike lanes: 66 per cent of non-cyclists, 77 per cent of utilitarian cyclists and 68 per cent of recreational cyclists think that dedicated bike lanes on city streets would greatly improve cycling in Toronto.

In fact, of the 40 per cent of recreational cyclists (those who ride solely for leisure) who would consider commuting to school or work, roughly half said they would do so if conditions were safer than they are now. 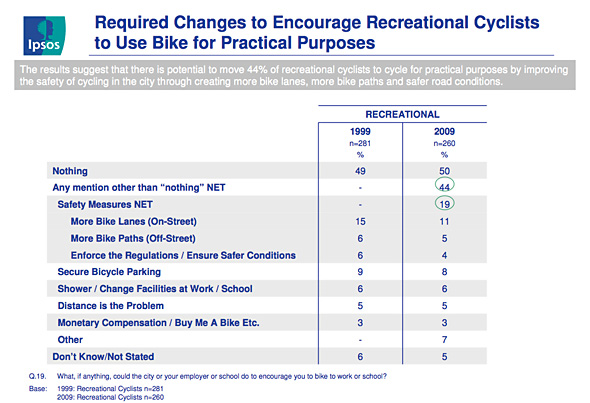 The 65 page survey is, for the most part, a repeat of the one completed in 1999 as part of the City's Cycling Master Plan. Undertaken via phone interviews of 1000 residents split equally (i.e. 250 each) from Central Toronto, Etobicoke, North York, and Scarborough, the data collection concluded just prior to the death of Darcy Allan Sheppard on August 31, 2009.

It's impossible to determine if the high profile tragedy involving Sheppard and Michael Bryant would have skewed the results, but even prior to the uproar that followed the events on Bloor St., it's apparent that safety -- and the perceived lack thereof -- is foremost on Toronto cyclists' minds. 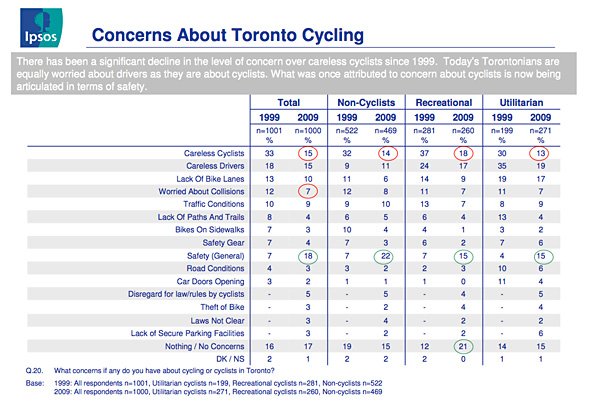 Although survey respondents show less concern over specific factors that can lead to accidents -- like careless drivers or other cyclists -- worry over general safety significantly increased across the board. This trend suggests that despite the steps being taken to increase cycling infrastructure, more needs to be done before the general concern that roads are unsafe for cyclists will be quelled. 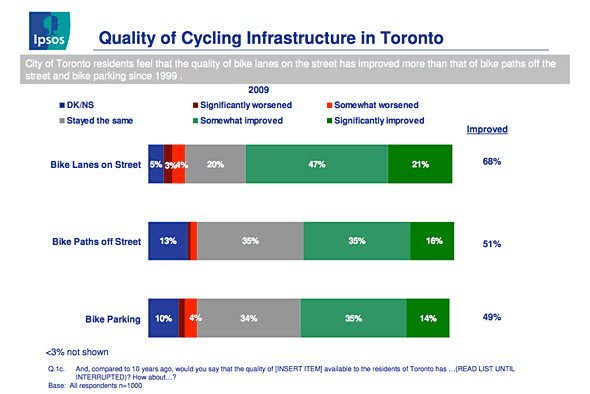 As such, a critical question to be posed is what these results would look like if Toronto had made good on its ambitious plans to increase dedicated bike lanes, off-road paths and secure bike parking over the 10-year period in question. Although cyclists believe that conditions have improved, it's not as though Toronto had a particularly progressive cycling plan leading up to the 1999 survey. Given the limited number of dedicated bike routes in the city prior to the initial survey, there was nowhere for the numbers to go but up.

It was 1993 when Toronto implemented its first bike lanes, and as of October 2009 the city boasts only 112 km of such infrastructure. The numbers increase when considering bikeways (the cumulative total of on-street lanes, shared roadways and off-road paths), but still lag well behind initial expectations.

In 2001 the City announced its plans to reach 1000 km of bikeways by 2011. At the time there were roughly 166 km in existence. At about 420 km today, the progress appears to mirror the findings of the survey. While there's been improvement, the meager six per cent increase in cycling (from 48-54 per cent) between 1999 and 2009 is potentially indicative of the failure to meet the projected bikeway totals in the corresponding time period.

As is often the case, the data from this survey can be made to tell a number of different stories. Supporters of the City's track record on cycling initiatives will note that commuter-based cycling is on the rise and that the sample group believes progress is being made when it comes to routes and facilities around Toronto.

Those more critical of the City will, no doubt, classify a six per cent gain in cyclists over the 10 year period as unacceptably low. But perhaps the most telling of the many statistics to be found here is the overall quality rating of cycling in Toronto. Although the responses of non-cyclists indicate a noticeable improvement over the 1999 numbers, those who do cycle -- regardless of their specific purpose -- aren't any more pleased with the experience of Toronto bike riding than those who responded a decade ago. 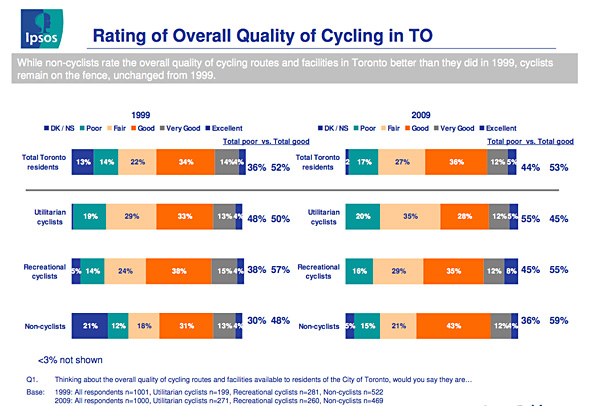 Surely this relates to raised expectations. But it should be a major concern that these numbers remain unchanged. Only one year away from the initial goal reach the 1000 km mark for bikeways (which has now been pushed back to 2012), Toronto has yet to reach the halfway point. And though development has been ramped up since 2008, overall satisfaction on the part of cyclists is unlikely to increase in the absence of the City taking more significant and timely steps toward fulfilling its promised infrastructure objectives.

Photo by Chewie 2008, member of the blogTO Flickr pool.