Is Jaywalking to Blame for Pedestrian Fatalities?

The discussion surrounding pedestrian fatalities, street crossing bylaws, and the car-friendly design of our city continues to rage on unabated. Despite interludes provided by sleeping TTC fare collectors and Adam Giambrone party invitations, the cold reality that something disturbing is happening on our streets clearly remains at the forefront of the city's collective consciousness.

The official response, however, has been less than reassuring. Toronto police were out in full force yesterday, ticketing those deemed to be jaywalking at a number of downtown intersections. Does such a strategy have any hope of effectively reducing the number of pedestrians involved in motor vehicle accidents?

Part of the problem stems from the fact that the term "jaywalking" is widely misunderstood. In fact, as Spacing contributor Dylan Reid pointed out earlier today, even some of the folks over at the Toronto Star aren't really sure what type of behaviour the term describes.

The paper's lead article yesterday, as Reid points out, completely misses the mark in its determination to label all mid-block crossing as jaywalking. While we may casually refer to it this way, the Highway Traffic Act stipulates that the vast majority of such crossings aren't illegal.

So what is illegal? Well, when one wades through the legal-speak, there are a number of pedestrian activities that break the law, but three in particular stick out: crossing an intersection at a red or amber light (and when the sign reads "don't walk"), crossing a road adjacent to a crosswalk (i.e. choosing not to use a nearby crosswalk), and not yielding to oncoming traffic when crossing mid-block.

Given this more stringent definition, yesterday's ticketing blitz appears as less of a self-described "wake up call" and more of public relations move. Although the officers were giving out tickets at intersections where the law was in fact being broken, I seriously question whether residents of this city chronically disobey traffic lights.

Quite the contrary, each time I return from a visit to New York, I'm astonished at how well behaved we all are, and I have to fight the urge to cross at virtually every red light I encounter. This is anecdotal evidence to be sure, but few of the deaths this month have been the result of pedestrians jaywalking at intersections with traffic controls.

Sure, one could say that anytime a pedestrian is killed crossing mid-block they must not have observed vehicular traffic's right of way. But such circular reasoning fails to acknowledge the myriad factors that contribute to such tragic accidents.

Was the driver speeding? Did he/she suddenly change lanes? Did he/she make an unsafe turn? 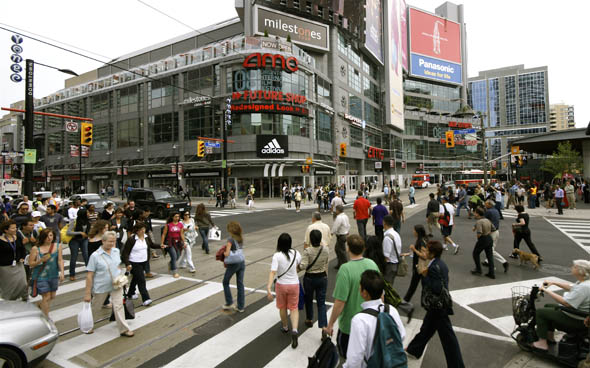 The point isn't to shift the fault squarely onto the shoulders of drivers. There are, no doubt, countless reasons why pedestrians and drivers are at fault in accidents of this nature. But, aside from Parkdale-High Park Councillor Bill Saundercook's call for city-wide speed limit reductions, those suggesting the need to to take a more thoroughgoing approach to this problem have largely been a small group of journalists.

The Star's Christopher Hume, for instance, has written a series of articles outlining why the recent deaths can, in part, be attributed to the post WW II paradigm shift that witnessed city-building philosophies privilege the convenience of drivers over the safety of pedestrians.

When it comes to specific solutions, Hume is unfortunately less helpful. His last two articles have mentioned the Dutch concept of the woonerf, or "naked street," which through the omission of traffic signs (right of way, speed limits, etc.) force both drivers and pedestrians alike to pay more attention. But even Hume himself recognizes the impossibility of such an experiment making a major difference in Toronto.

In fact, the thing that's so frustrating about this increase in pedestrian fatalities is that there is no obvious way to address the problem in a surefire manner. It's not even possible to know for certain if the confluence of accidents isn't mere coincidence, and that the numbers won't drop off in the weeks to come.

It is, however, a good bet that a ticketing spree is not an effective strategy -- especially one undertaken in an area in which there have been no (recent) fatalities. Instead of directing attention to band-aid solutions that accomplish little more than the optics of "doing something." Perhaps it's time for the City to revisit the data from the 2007 Pedestrian Collision Study (see bottom of page), an in-depth analysis of accidents involving pedestrians in 2002 and 2003.

As the study plainly states, "enforcement of traffic laws has limited effectiveness in collision prevention. Generally, when there is an enforcement safety campaign, the initial compliance rate can be very positive. Unfortunately, once the enforcement campaign has ended, the compliance rate begins to revert back to the pre-enforcement conditions."

Instead of enforcement alone, the authors of the study recommend that this be paired with a combination of infrastructure improvements and educational initiatives. Some of the infrastructure built in conjunction with the 2007 study included the construction of new sidewalks, the installation of audible pedestrian signals and countdown signals at traffic control intersections, and improvements to pedestrian crosswalks.

These are all nice additions to help keep pedestrians safe, but none are really aimed at so-called jaywalkers. Moreover, they're all quite conservative.

Should this disturbing trend continue, more aggressive measures will need to be taken. Along with reduced speed limits on certain city streets, some have proposed that the width of streets be narrowed -- a step that would surely enrage drivers and cyclists alike.

But perhaps that's the problem in a nutshell. The city is a mixed-use space that is perpetually contested by its various groups -- the driver, the pedestrian, and the cyclist. And recent events would indicate that it's impossible to keep all three safe and happy.

Or is such a statement altogether too defeatist? How would you address the problem?