Do You Have to Be Crazy to Ride Your Bike in the Winter?

Winter cyclists are a crazy breed. That being said, this is the first year I've ever considered pedaling in the minus degree weather. But I wasn't quite convinced.

I ended-up at one of Bikechain's Winter Riding seminars this week to learn more about winter biking. I left just as skeptical.

Bikechain is the University of Toronto's bicycle resource and repair centre. The space, as expected, is riddled with bikes leaning against walls, tires hanging from walls and bike grease everywhere, including on walls.

There were about four other people who also wanted some tips on winter riding. One of them was Jarlene, a grad student. Like me, this is the first year Jarlene has thought of riding her bike in the winter. Unlike me, she's already doing it.

"I never considered it before because it just wasn't something you did. You know, you put your bike away before the winter and you bring it back out in the spring," she said.

Why did she decide to finally brave winter on two-wheels? "Because everyone around me was doing it." I got an equally unconvincing answer from Elton, who also attended the workshop. Elton was a bike rider in his native India and continued the practice here. "I just love it" was his answer as to why he rides in the cold. 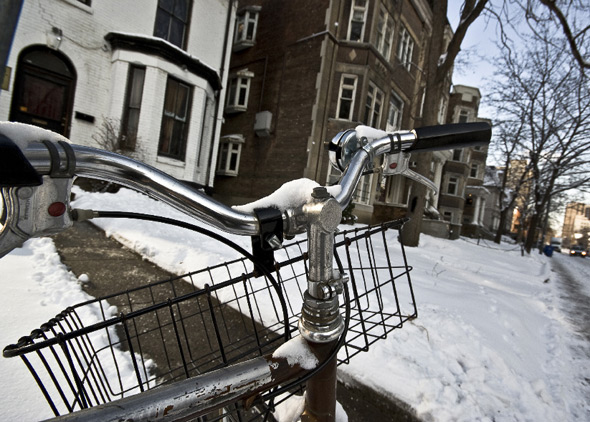 Mathew was Bikechain's seminar leader. He's been a bike mechanic for 18 years and an avid rider for over 20. His first tip for winter riding? Not surprisingly, "dress warm." Then the group shared stories about searing lungs, tear-filled eyes and the joys of sweating in ninja masks and snow pants.

Oh, and the second tip was to expect to fall.

To be fair, Mathew offered a bunch of other guidelines, like how to brake on ice, the necessity of fenders, and the importance of cleaning your bike of snow and salt. But he lost me after his first two two tips. I kept envisioning the cold air damaging my lungs and the prospect of falling into oncoming traffic thanks to a bad skid.

One tip that did stick defied conventional wisdom. Apparently, street tires are better for city winter riding. Mountain bike tires, or as Mathew likes to call them, "knobbies," give you less traction.

Though I'm chickening out this year, it seems like winter cycling is getting more attention in the city. In addition to Bikechain's seminars and their online tips, NOW Magazine Online recently posted their own winter riding advice, I Bike T.O. e-mailed additional guidelines to their list-serve members, and the City of Toronto has a winter riding site that includes a "Reasons to Ride Your Bike in the Winter" sheet. One of the reasons --"It always starts, regardless of how cold it is."

For all you brave and slightly crazed souls who ride all season, maybe I'll see you on my two-wheeler next winter.

Lead photo by sjgardiner, second by Lyndsay Jobe, both of Flickr.