Canada Bread Closing and the End of Industry in Liberty Village

The smell of freshly baked white bread - sweet, yeasty, with only the faintest bitter note of browning crust - fills the air at the foot of Mowat and Fraser streets in Liberty Village. The Canada Bread bakery is just letting off a shift, and small groups of men are leaving the building carrying bags of English muffins and sliced loaves - a perk, it would seem, of working at the last major manufacturer still doing business - for now - among the converted factories, machine shops and warehouse lofts in the area.

Like those long-gone industries, the smell of bread will soon be gone from Fraser Street - this week Canada Bread announced that it would be building a new "super-bakery" at an as-yet-undecided location in southwestern Ontario, and that the Liberty Village bakery, along with two others at Keele and St. Clair and in Etobicoke, would be closing, one a year starting in 2011. It's part of a slow but steady exodus of manufacturing out of the city, a trend that affects municipal tax revenues as well as the general feel of the city's older neighbourhoods, with their long history of mixed use and commerce cheek-and-jowl by homes.

It's a model that the city might have finally outgrown, at least according to Canada Bread's needs. "It's the case with the three GTA facilities," says Jeanette Jones, media spokesperson for the company. "They are all aging assets, in the case of Fraser Avenue the facility is over a hundred years old, though it's only operated as a bakery since the '50s. They have been constrained by urban development and do not have the capacity for expansion on any of those sites. We did look in the GTA for a large parcel of land but couldn't find a suitable location which means we've had to look outside, to the southwestern Ontario area." 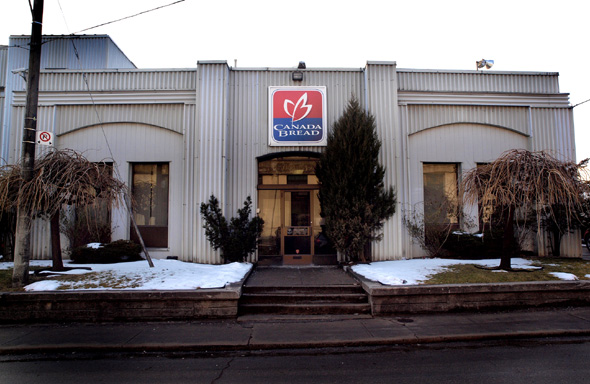 Somewhere underneath the vertical aluminum cladding that covers most of the Fraser Avenue plant is the bones of Dysan Tool & Die, the factory that Canada Bread acquired in 1958 - one of several machinist's shops that did business in what would be known as Liberty Village. The bakery was opened in 1959 it had joined the central bakery on Cawthra Avenue near Keele Street- a low-rise plant that, due to its proximity to the St. Clair West stockyards, could lay claim to providing the hamburger buns for the beef being produced just across Keele.

A third plant on Four Seasons Place in Etobicoke was built in the '70s, but it's the older bakeries, situated alongside major railway lines in the west end, that hearken back to the city's industrial past, which relied on major CP and Grand Trunk lines more than our nominal port for its prosperity. Railways have been superseded by highways and trucks, however, which finally prompted Maple Leaf Foods, the majority owner of Canada Bread, to move out of the city.

"Proximity to transportation networks, public infrastructure, are all key factors," explains Jones. "A skilled and stable workforce is another factor ... Clearly we're looking to make the move for a number of reasons, not the least of which is to remain competitive, and we're looking for a facility that will support our longer-term growth." 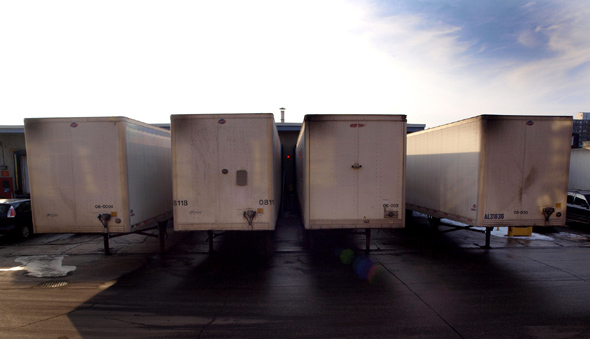 Lynn Clay is head of the Liberty Village BIA, and says that Canada Bread's departure effectively closes a chapter in the neighbourhood's history - the last manufacturer to move away. "I would say they're the end of it. Barrymore (Furniture) moved out in 2000-2001, and Canada Bread is about it. Who's moved into the area now? Mostly small to mid-sized commercial operations, but mostly they're working on computers - more office-oriented, creative businesses."

She searches for some facts about the plant, and tells me that, as of 2006, Canada Bread employed 150 people in the area, most of whom Jones says will be offered positions at the new plant or other Maple Leaf facilities in the GTA. Clay also comes across the staggering fact that the Fraser plant produced 65 million loaves of bread at its peak. Since the bakery is located on city-zoned Employment Lands, she notes that anyone hoping to put up a condo on the prime piece of real estate will be in for a major battle with the city. "Residential is coming in around the area, but from Hanna to Dufferin and King Street down to the railroad tracks we are an employment area and Toronto planning is very adamant that the area remain and be protected as an employment area."

Clay hopes that the Fraser plant will be the last of the three bakeries to close, but Jones later tells me that it'll be the second - due to turn off its ovens in 2012, after Cawthra and before Etobicoke. But it's the smell that Clay says she'll miss most of all: "They're wonderful neighbours - one of the claims of Liberty Village is the smell of fresh bread in the neighbourhood. It's obvious that we're going to miss the people and what they add to the area, but it's that smell of fresh bread that'll be a loss for us." 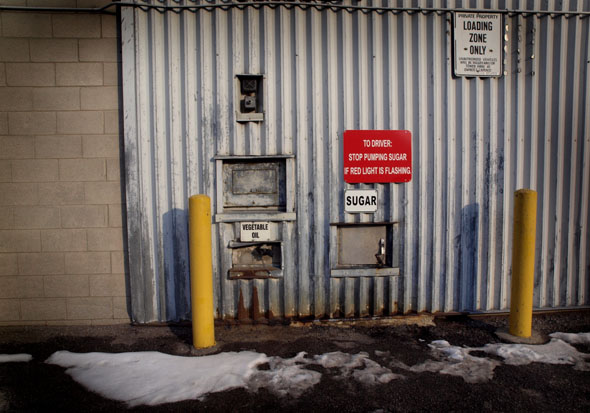