WW2-Era Downsview Hangars to be Saved? A (Possible) Happy Ending to a Heritage Battle

For the first time in a very long time, a story about architectural heritage looks like it might have a happy - and relatively swift - ending. Nearly a month ago, two WW2-era airplane hangars on what was once an active air force base in Downsview began to be demolished, but thanks to their prominent location, they got noticed by the right people.

Built by De Havilland of Canada in the final years of the war, the two massive airplane hangars were once located among farms, miles away from Toronto's city limits, but today they're near the intersection of Dufferin and Sheppard streets, just north of the 401 and west of the Allen Expressway, just across the street from the Downsview terminus of the Spadina subway line. They're hard to miss, and it's no surprise that they caught the attention of Paul Oberman, a property developer notable for his willingness to take on and restore heritage properties.

"I was driving up the Allen Expressway about three weeks ago and noticed what looked like demolition activity at the hangars closest to the street," recalls Oberman, the man who can count the Gooderham flatirion building and North Toronto Station (aka the Summerhill LCBO) among his portfolio of properties. "I drove in and found that the buildings were being demolished. So I immediately made some phone calls to the city and the province and the Ministry of National Defense, and made as many inquiries as I could, and I asked for an audience to see if there was a way of preserving them."

He got in touch with Lloyd Alter, president of the Architectural Conservancy of Ontario, who put out a press release that rang alarm bells in the media. The two of them orchestrated a campaign that bore fruit earlier this week when the Department of National Defense put a 60-day stay on the demolition, pending negotiations that took Oberman and Alter to Ottawa.

"It's such a perfect spot for a million uses," Alter says. "They're huge spaces. They're naturally lit - they have these glorious monitor skylights and as the Heritage Canada Foundation said, these two hangars were 'distinguished by both their construction of steel, glass and concrete, and their precise and polished design aesthetic.'"

They might not be elegant, but the De Havilland hangars - built as part of the company's contract to provide almost 1,200 Mosquito bombers for the war effort - have a square-shouldered, muscular majesty, and come loaded with history, not only from the war years, but as a Cold War air base. Alter evokes the Mosquito - a revolutionary plane built by furniture makers from shaped plywood when both metal and metal-workers were scarce - to imagine a truly spectacular showroom for modern furniture, while Oberman is eager to see the buildings returned to regular aviation use, either as a museum (the Canadian Air & Space Museum just across Downsview Park from the hangars is chronically short on space) or as a home for a Canadian air exposition.

Whatever happens, it's hard not to be impressed by the speed of the DND's response, and their apparent willingness to accommodate - a far cry from the usual heritage battles involving city hall, the Ontario Municipal Board, and the heritage bureaucracy. Oberman explains that the federally-owned buildings are exempt from this grinding process, while Alter hopefully imagines that, as the demolition was simply occasioned by the DND's lack of interest in maintaining the buildings, there was no agenda, hidden or otherwise, at work. Right now they remain mostly intact, and while the south-facing hangar doors have been removed, they're apparently sitting, neatly stacked and spaced, on the site, and can be re-hung.

"It was probably some bureaucratic decision," Alter says, "and now that it's a political thing, I don't think it's going to come back. I think in this particular case it was a matter of shining some light, and when everybody sees what they've got, and that people care about it, it changes." 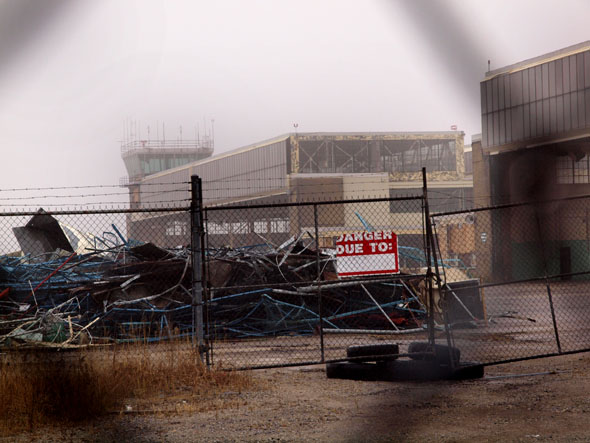