Yesterday's "Drop Fees" rally saw hundreds of university students join their peers in separate feeder marches in front of University of Toronto's Convocation Hall. The group of about a thousand then made its way to Queen's Park in order to protest on its front lawn.

Organized by the Canadian Federation of Students Ontario, this year's iteration of the province-wide campaign stressed the need for the government to lower tuition fees and provide affordable education on account of the fact that high tuition fees contribute to poverty in Ontario.

The jury's still out, however, on whether this was the most effective plan of attack.

Before this year's event even began, it was met with criticism for closely linking university tuition with poverty and its diluted message in general.

Nevertheless, the placards and banners drove home the student belief that high tuition is causative of poverty in Ontario, and the chants I heard further cemented the linking of these two issues: "What do we want? Drop fees! What do we need? End poverty!" 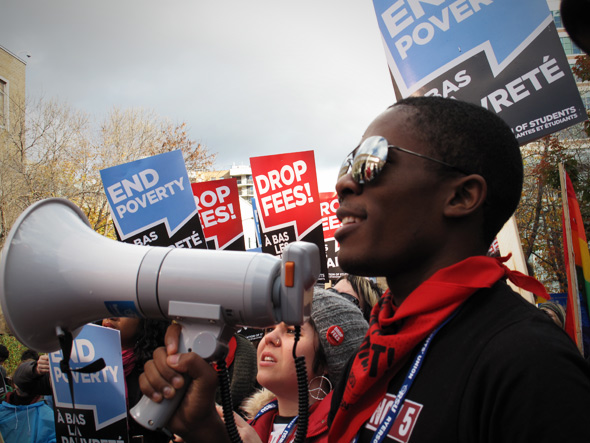 Other chants also raised the issues of provincial healthcare, childcare, housing, gender equity, racial equity, and international students' rights, all of which were linked to high university tuition. 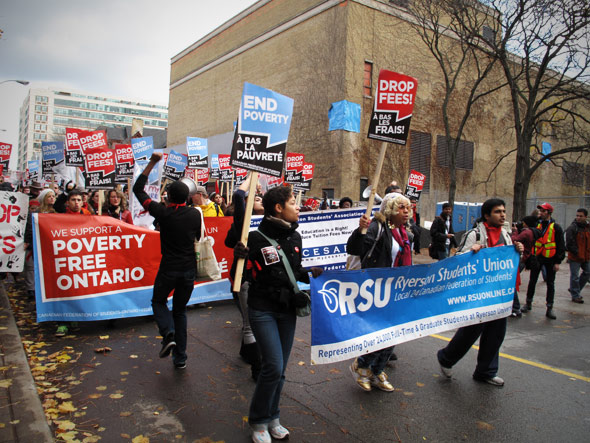 Participating schools included Ryerson University, the University of Toronto, George Brown, OCAD, and York University. At the Ryerson Student Centre pre-rally street party, several student speakers were called upon to stand atop the balloon-covered bandwagon, including an international student and a student advocating women's rights in the workforce. 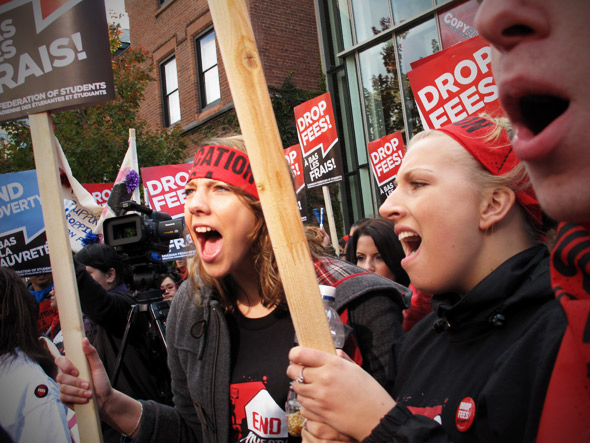 "More opportunities for people with colour!" shouted one of the speakers on the bandwagon.

"For every dollar a working Canadian man makes, a woman makes 70 cents!" shouted another. 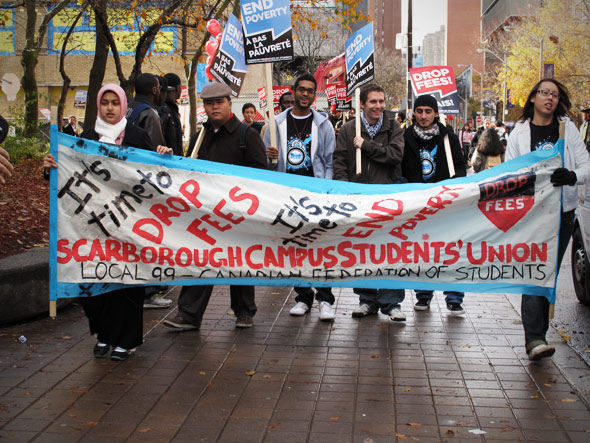 The Ryerson party was joined by U of T Scarborough before parading up Yonge to College. A DJ on the bandwagon mixed dance music that blared from mounted speakers as participants chanted and motorists looked on with interest and mild annoyance. 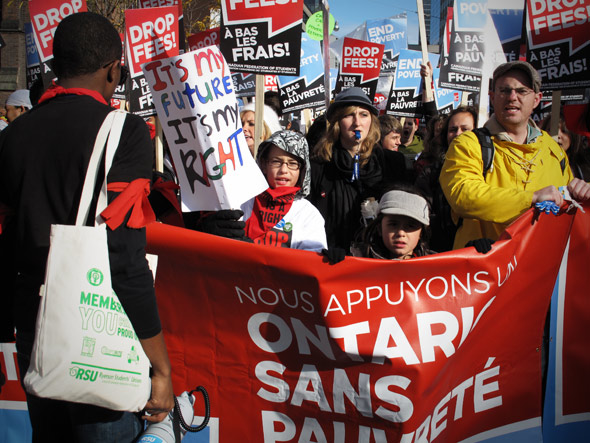 The parade was not solely composed of university students -- I spotted young children and their parents in the thick of it all. At College St., the parade turned west and marched past Queen's Park to King's College Circle, where it convened with the feeder marches from other schools. 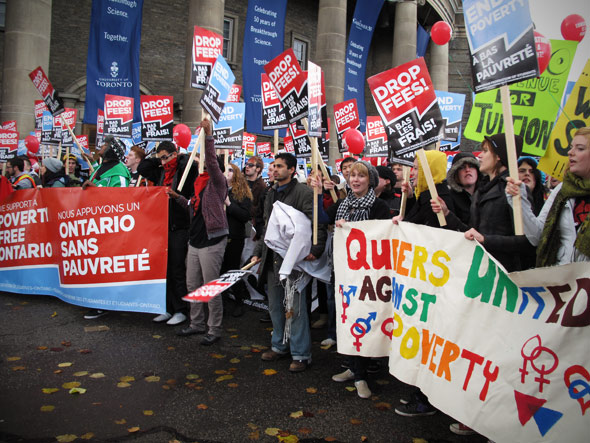 As schools pooled together in front of Convocation Hall, the weather seemed to reflect the mishmash of voices and ideas: the optimistic afternoon sun turned to sleet within minutes, before slowly turning back to sun again.

Multiple societies and unions appeared with banners to protest and piggyback on the rally's strength of numbers. The chants heard on the lawn were all over the map in terms of topics. The "Drop Fees" participants' main cry was for a new post-secondary education system with increased government funding -- that much was crystal clear. But the cheers linking high tuition to poverty, as well as the slew of other issues that were raised, may or may not have made for a muddled campaign.

Time for the jury to weigh in. Was the implementation of this year's Drop Fees rally effective? Or could it have benefited from a more focused message?