Remembrance Day in Toronto is being marked by ceremonies honouring those who have fallen in military battles. Some offices are closed for the day, some open late, and most of us will work through the day and take a moment of silence at 11am.

When you buy lots of anything, you generally get great pricing. But not always. The City of Toronto, for example, appears to have gotten shafted when it rush purchased over 200,000 bottles of hard sanitizer for health professionals at $2.59 per bottle. I bought one mini bottle of Purell at Shoppers this weekend - for about the same price.

The Toronto Port Authority has gone ahead and made the decision to rename the City Center Airport "The Billy Bishop Toronto City Airport," despite there already being an airport in Owen Sound, Ontario. The TPA generally does whatever it wants, doesn't it? 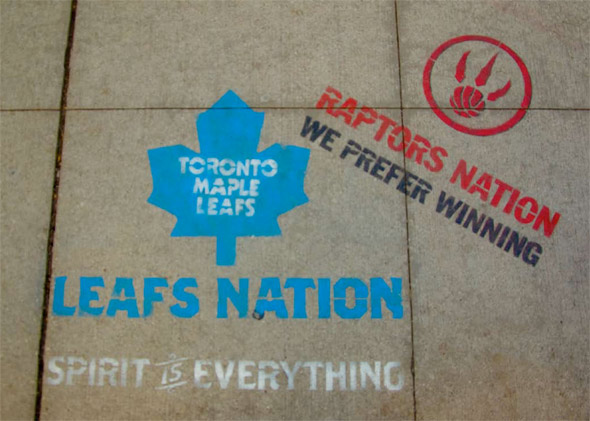 The Leafs are recently playing their best so far this season (3 wins, 3 loses, and 4 ties in their last 10 games, which really isn't so hot). But because in the NHL standings spirit is NOT everything, Raptors fans at the Zan Tabak Herald had a little fun with stencils down by Union Station.

The Giller Prize was awarded to Linden MacIntyre, for his book that touches on the uber-sensitive topic of sexual abuse within the Catholic church.

And tough new rules aimed at slowing the rapid restaurant/bar development on Ossington have been proposed and include: no large or two-storey restaurants, no rear patios, no large side patios, and more. Should these kinds of limitations be imposed? What's best for the neighbourhood?