Ontario is making an effort to boost locally-made wine. Starting by dropping the totally misleading "Cellared in Canada" label would be the honest thing to do. Making knock-your-socks-off-delicious wine that could compete with wines made in other more suitable regions of the world would work too, but given that we can't control the weather, I'm not sure that can really ever happen.

"The city of Toronto right now is the biggest pimp in North America." While is sounds like something that former Toronto mayor Mel Lastman might say, these are in fact city councillor and potential mayoral candidate Giorgio Mammoliti's words. He's commissioned a study in light of concerns that sex trade laws are being challenged in the courts.

It's proven to be a losing battle, and advertising is pretty much everywhere. LCD screens are on the highway, in the subway, in taxis, and even on elevators in rental apartments. But should these same types of digital commercials be allowed in our high schools? There are some places that should be deemed ad-free, despite difficulties in securing no-strings-attached funding from private and government coffers.

Did you know that the City of Toronto pays people to harass seniors who use public parks to take group walks? A bylaw officer got all authoritative on a group of seniors who were warming up for a yoga class by strolling in Humber Bay Park. After cutting off their path and taking photos of them, he threatened to fine them because they didn't have a paid permit to use the park for classes. If my cute but feisty grandma was there, she would have told him to stick Municipal Code Chapter 608 where the sun doesn't shine.

And speaking of feisty seniors... over on Toronto Mike's blog, it's been revealed that Mississauga Mayor Hazel McCallion has three arms, and possibly is hiding even more. Back on September 13th, the Toronto Star originally posted a photo but quickly changed it to the latter (see before and after photos below), presumably because they're trying to cover up the truth*. Maybe she should join those seniors in the park, so she can give silly bylaw officers the three-handed slap*. 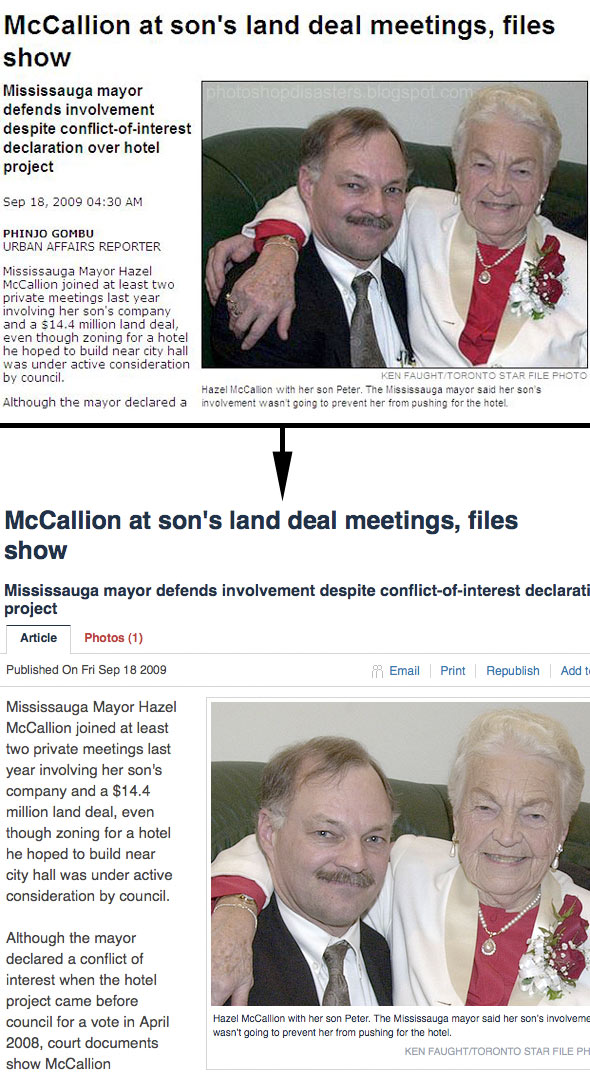