The renewal of the abandoned brick works in the Don Valley near the Bloor St. Viaduct has been one of Toronto's most anticipated projects for over two decades now, ever since the city expropriated the site from the developer that planned to put high-density housing on what's become a treasured conservation area.

Evergreen, the non-profit group who acquired a lease to the brick works in 2002, are turning the factory buildings into what it calls an "environmental community centre" - the completion of which is now only months away. Construction began last fall, but a tour of the site yesterday showed startling progress, especially if you had long considered the brick works just a picturesque industrial wasteland beloved mostly by photographers and graffiti artists. 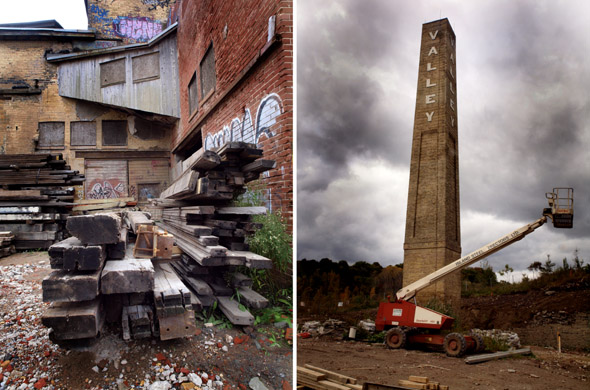 David Stonehouse, director of site development for Evergreen, led me to a pathway overlooking the construction to show off the elevator shafts for the administrative centre, which will be covered in steel framing and prefabricated concrete panels over the fall, and enclosed by the winter. Architect's renderings of the building promise an earth-coloured structure topped with ranks of solar panels, just a bit shorter than the brick works' trademark chimney with the word "VALLEY" worked into its sides - the sole remnant of four that once stood over the factory. 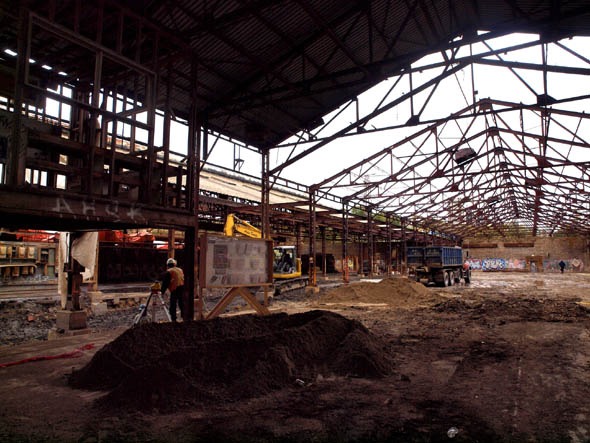 Just beyond the shed where the Saturday farmer's market takes place, the roof has been taken off one of the buildings, and its naked steel framework will cover a courtyard that project drawings promise as a garden in the summer, a hockey rink in the winter. Stonehouse points out the excavators digging out a brownfield - topsoil contaminated by residual metals and petroleum derivatives - and replacing it with clean dirt.

Just to the south, a crew in white coveralls are cleaning up asbestos, and the tunnel kiln in the building next door is about to be covered up so that roof - made from an asbestos composite called transite - can be replaced. In another part of the site, a team of students from George Brown are putting up short brick walls, practicing before they begin the job of repointing decaying brickwork on factory walls that once provided most of the bricks that built Toronto from the Great Fire of 1904 to the post-WW2 boom. 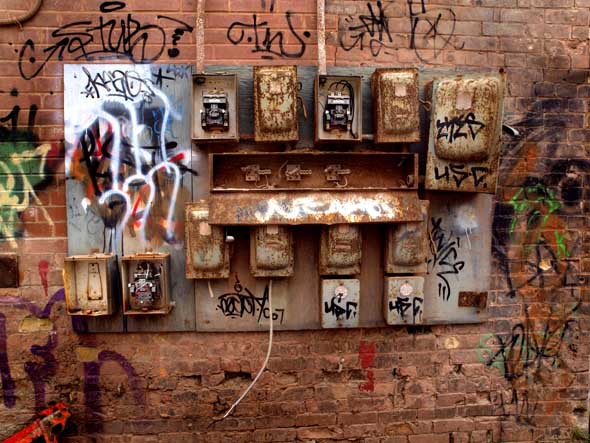 While there are similar projects in 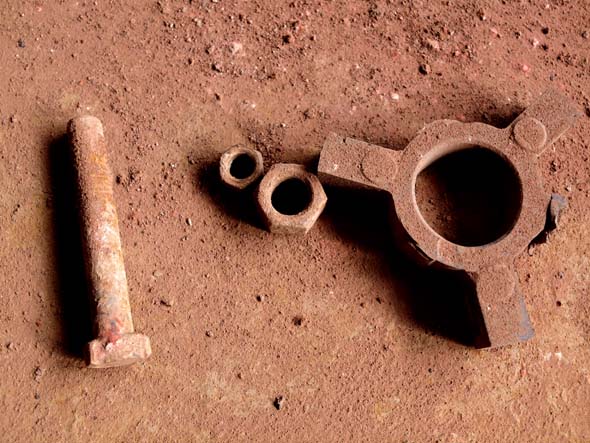 Massachusetts and Germany, the brick works is the first ecological interpretive centre to repurpose and industrial site on such a scale. Stonehouse promises that the rich, picturesque textures of the abandoned complex - the utilitarian pipes and ducts and rusted machinery - will be retained wherever possible, and predicts that Evergreen is on target for a soft, gradual opening of the complex to start next spring and continue throughout the following summer.