The Ontario government will soon implement a province-wide ban on the use of hand-held mobile devices while driving. Amendments to the Highway Traffic Act (aka Bill 118) were approved way back in April of this year.

The long and the short of it is that we'll soon face fines if we're caught taking our eyes off the road and moving our attention to twiddling our thumbs on iPhones, Blackberries, and cell phones while cruising along the Gardiner or Bloor (or any other roadway) in our cars.

And despite what my friends, colleagues and the internet at large have been suggesting, the law didn't go into effect on September 1st. Nor can we be certain that it'll go into effect on October 1st. Why all the confusion about the start date?

The culprit may in part be what landed in my inbox this week. An email, bearing the City of Toronto's official logo, appears to have caused some confusion about the law's implementation date and gotten drivers abuzz a little early. 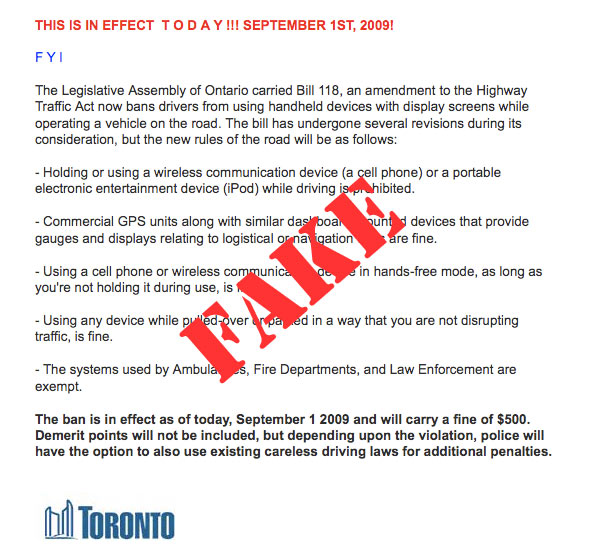 Fake circulating missive or not, getting the public to jump the gun on this one probably isn't such a bad thing, given that we're nowhere near ready to follow the law. If my observations while driving on both inner-city streets and the major highways in and around Toronto are any indication, it would appear that a lot of drivers haven't adjusted their habits yet. Many simply aren't complying, and most are wondering how the new law will be enforced.

I spoke to Bob Nichols of the Ministry of Transportation of Ontario, who summed things up rather succinctly. "People are aware. It's not a matter of what [the new law] is, it's a matter of when [it goes into effect]. Stay tuned."

Enforcement is expected to be carried out by both provincial and city police, once the law goes into effect. Fines will range from $60 to $500.

As for the email that's been circulating? "It's not a City of Toronto communications to the public," explained Rob Andrusevich, Senior Communications Advisor for the City of Toronto. "It is a provincial law and they would be the public's primary source of information on this matter," he wrote.

Language in Bill 118 vaguely suggests that the implementation will occur "in the fall," once fine-tuning is complete and when proclamation by the Lieutenant Governor occurs.

In the meantime, I'm preparing myself. Using speakerphone over my car's stereo system will allow me to carry out hands-free phone calls. If that fails, I may try the built-in-mic-and-one-ear-bud headphone approach. And scan-reading email and using Google Maps on the fly? That'll simply have to stop now, won't it?

How does this affect you? Please take our poll: 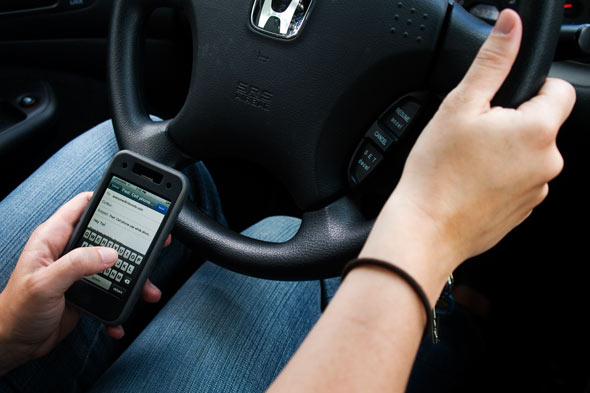