Video screens display a white background that flashes all of the square's affiliate's logos before the new "10 Dundas East" logo appears in large, purple, serif letters. 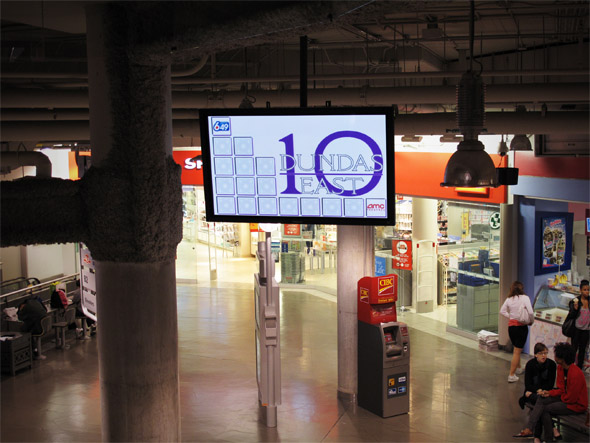 The square, loved by some and loathed by others, opened in 2007, not long after St. Joseph Media announced that they'd acquired naming rights and planned to brand the complex Toronto Life Square.

But within about two years, the project's developers, PenEquity, went into receivership. According to the Globe and Mail, "creditors foreclosed on the property in April after its debts reached nearly $280-million. More than $120-million is owed to the Royal Bank, more than $130-million to the Missouri-based Entertainment Properties Trust, $9.3-million to the City of Toronto, and $16-million to two pension funds." 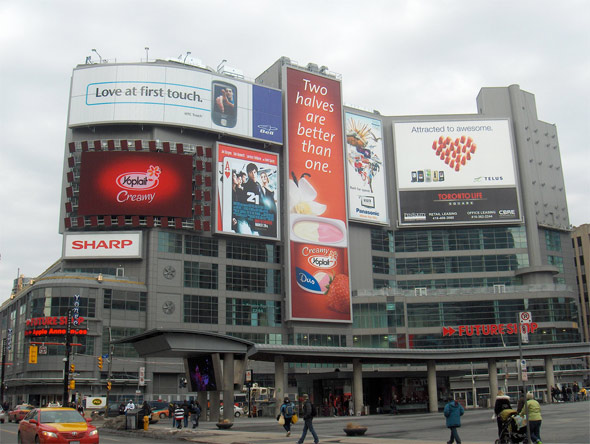 PenEquity doesn't appear to be down and out, though. In fact they're using the front page of their web site to announce that they're taking the Toronto Star to court over what they're calling a "recent factually incorrect article." Sounds like a sticky mess to me.

According to a citation-lacking tidbit on the wiki page, Toronto Life wants out. And the new 10 Dundas East signs suggest that they might be getting their way. That said, the Toronto Life Square web site is still alive.

When will the exterior see a giant Toronto Life sign erected? Perhaps never. And when will those broken escalators be fixed? Perhaps after the complex's retailers pool the money, or a buyer with ample financial backing steps up to take it over.

Long-standing, unanswered questions are likely to be resolved in the fullness of time.

Photos of new 10 Dundas East signage by Jennifer Tse, and photo of the square by seekdes.