A memorial bike ride for Darcy Allan Sheppard, the cyclist who was killed in an altercation with Michael Bryant, took place earlier this evening near where the tragic events occurred on Monday. About a thousand participants and a throng of local news media congregated on Bloor just west of Bay before taking to the streets in a ride that was as much a protest over poor riding conditions as it was a tribute to the fallen cyclist. 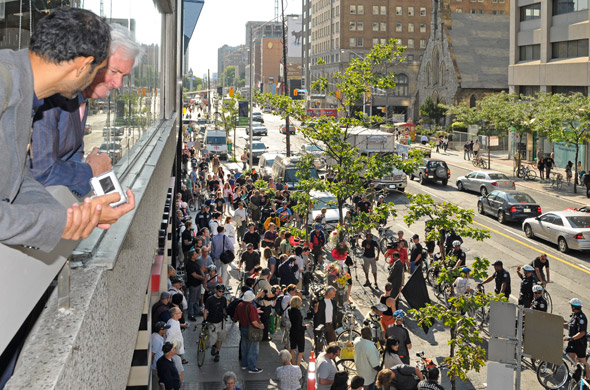 Although tempers remained mostly in check, as I photographed the ride I did take note of a number of heated exchanges between people passing by and cyclists waiting to depart. In fact, just prior to my arrival, the driver of a Sun TV van was the recipient of a verbal tirade from a cyclist who felt the he wasn't given a wide enough berth. I didn't see the events that led the cyclist to anger, but it doesn't matter. It served to demonstrate just how tight and dangerous riding in that area can be and how tense relations are between cyclists and motorists. 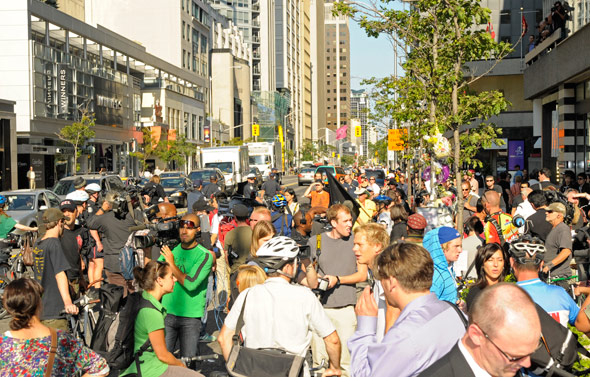 While the the news that Sheppard had been drinking prior to encountering Bryant has made an already controversial event even more so, the cyclists I spoke to held to the notion that with better and safer riding conditions the tragedy could have been prevented. 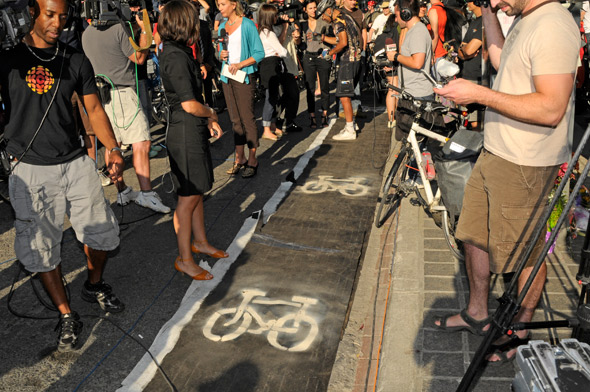 As part of this, a number of riders set up a temporary/makeshift bikelane beside the memorial. Even though the road was packed, it was pretty clear that this section of Bloor could accommodate the addition of a dedicated lane from a spatial standpoint. 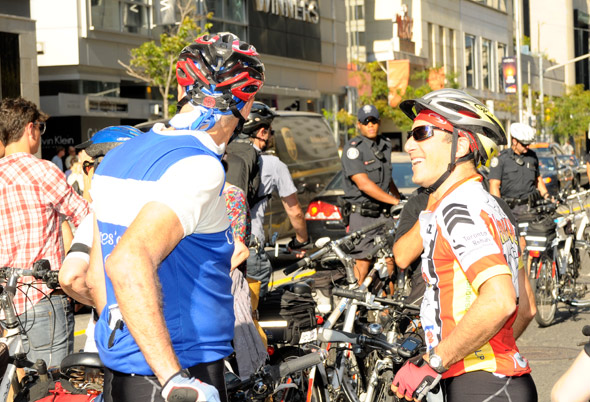 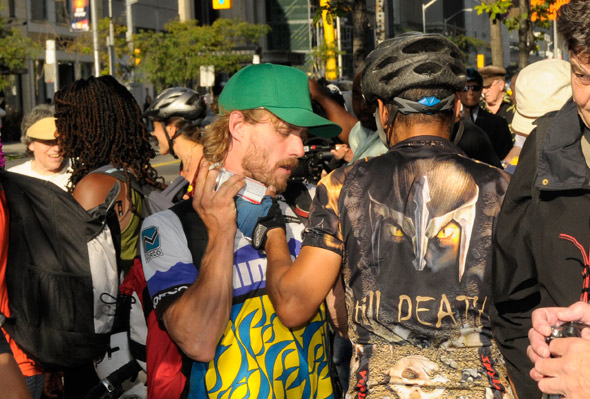 The participants in the ride came from various cycling backgrounds, including commuters, couriers, and even some roadies. And while spirits were at times high, sobering reminders of Sheppard's death kept the lighthearted banter to a minimum. 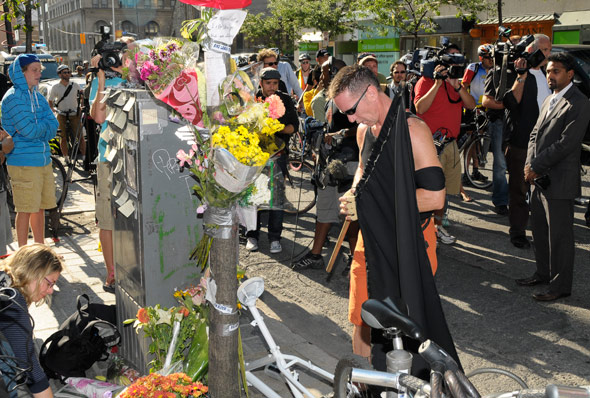 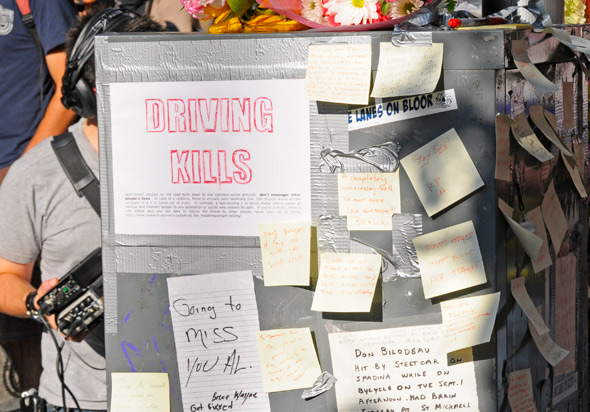 Although the ride did cause a significant disruption for pedestrians and drivers on their evening commute, people seemed more fascinated by the events than angered. And, as far as protests go, it didn't last too long (in any one place). 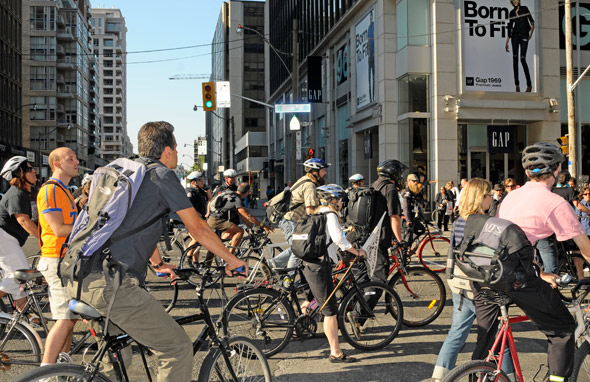 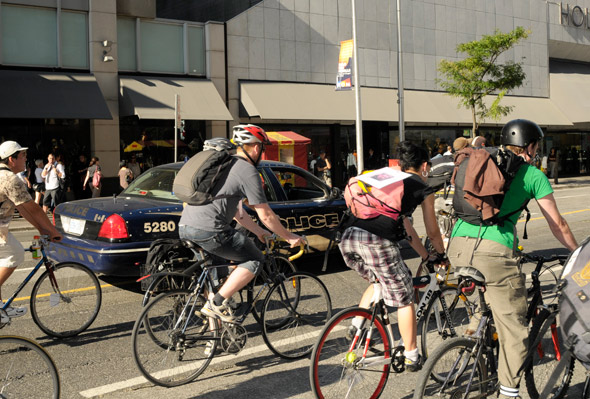 The latest news from the police investigation is that Sheppard 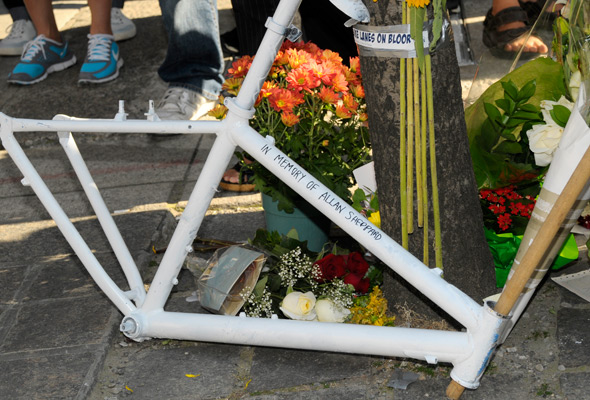 may have grabbed the wheel of Bryant's car or Bryant himself. Should this be the case, it'll certainly cast an entirely different light on who was primarily responsible for the tragedy. But, I think it's critical to remember that the origin of the altercation was a minor collision between Sheppard and Bryant which then escalated. These types of arguments happen all too often, even if they don't get out of control. But, an event such as this one forces home the fact that there's a widening chasm between cyclists and drivers. And as great as an increase in bike lanes would be, it seems that a massive attitude shift has to take place to bridge the gap between these two groups so as to ensure that future tragedies of this nature are prevented.