The TTC has recently started offering tours of their premises. On Thursday afternoon I got to explore the now defunct Bay Lower subway station, which is most commonly used for renting out for corporate events, the occasional tv show, music video or Hollywood movie.

For just $15, you can go on an hour-and-a-half tour in a small group (15-20 people) and see parts of the TTC that have otherwise only been available to the public during busy and often crowded Doors Open events. So far, there's been tours of the TTC Operations Training Centre and this tour of Bay Lower subway, which both sold out quickly.

Bay Lower station hasn't been actively used for regular TTC service since six months after the station's creation back in 1966. And this, of course, adds to the intrigue. What does an abandoned, empty subway station look like? 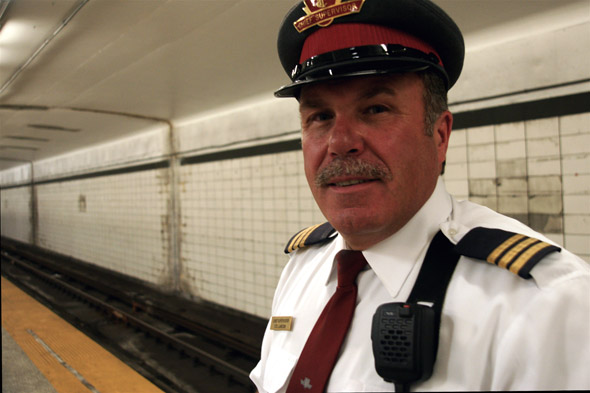 It looks dirty and grimy. "There's no use trying to keep the station clean," says TTC Chief Supervisor Stu Lawson, who led the tour of Lower Bay. "It wouldn't stay that way for long." 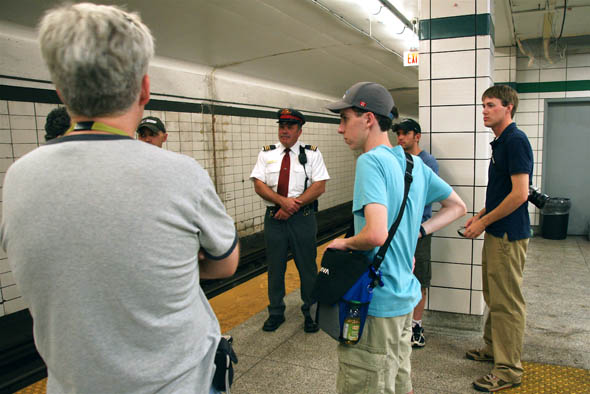 Lawson said that subways are still rerouted down there sometimes for maintenance work. Once a wedding reception was even hosted down there, but the bride's dress became quite dirty in no time. 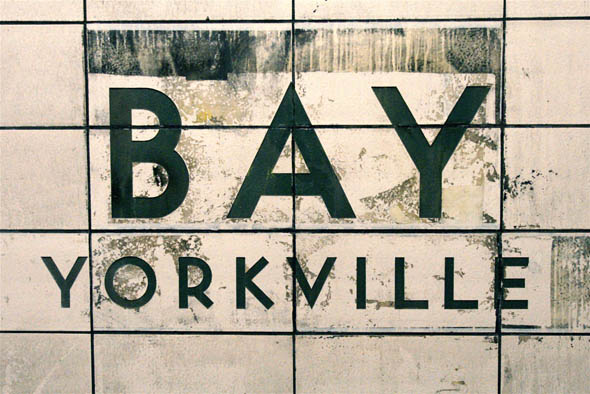 I learned that an extensive list of films were shot in this space. They mostly try to cover up the "BAY YORKVILLE" signage (of which there were plenty, in various states of decay) and brand it for their own use. I found it amusing how Toronto's lowly Bay Lower station was to become New York City's bustling Grand Central Station in a movie, as evidenced by the residue on one of the white pillars. 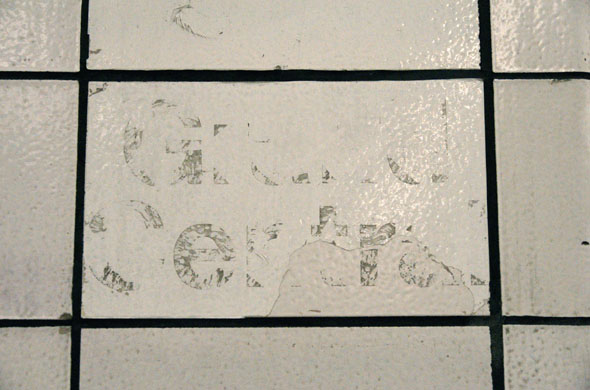 I tried to recall the subway scenes in these films, all of which were filmed in Bay Lower station: 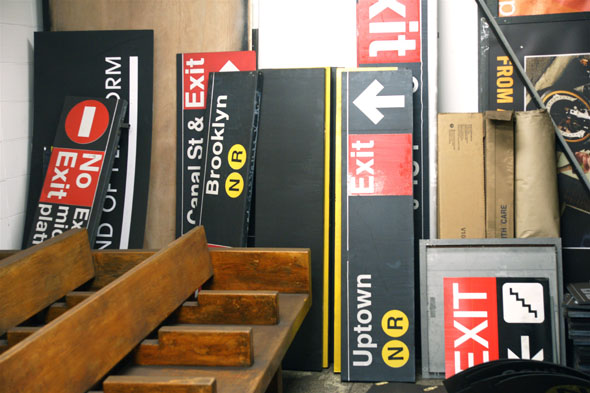 Our tour took us to a small storage room where movie sets have left some of their props, including a wooden New York City subway bench and various signage. 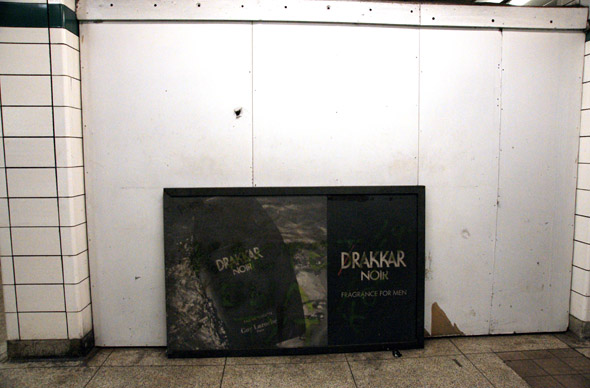 After the brief tour and talk we were free to roam about the station, so long as we didn't go on track level. I strolled to the end of the station where I found another movie prop relic: a Drakkar Noir ad, circa 1988? Do people still wear that stench? 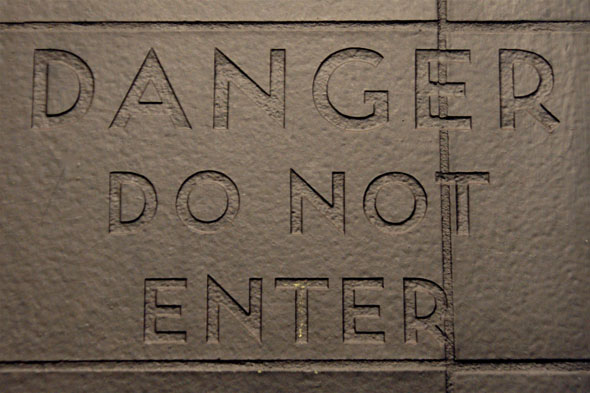 I peered around the corner at the end of the station, mindful of the danger sign. 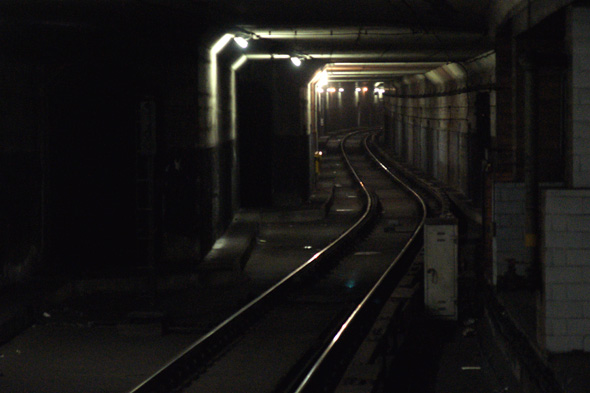 The view from there was dark and mysterious. Moments later I could hear the rumblings of the subway above. I could even see lights overhead as it passed by mere feet from where I stood. 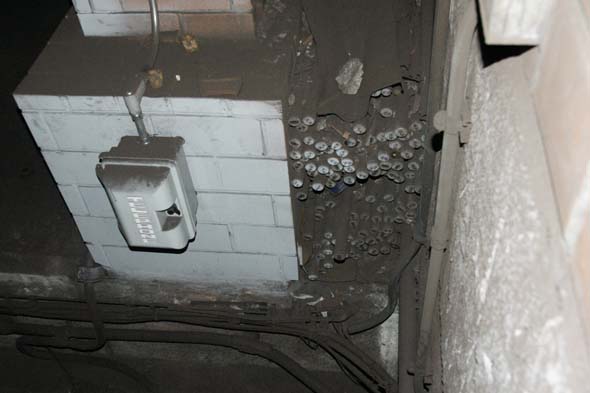 I wouldn't dare get this close at a working subway, but I peeped around the corner from the edge of the station and saw a stash of lighting tubes and a telephone box. 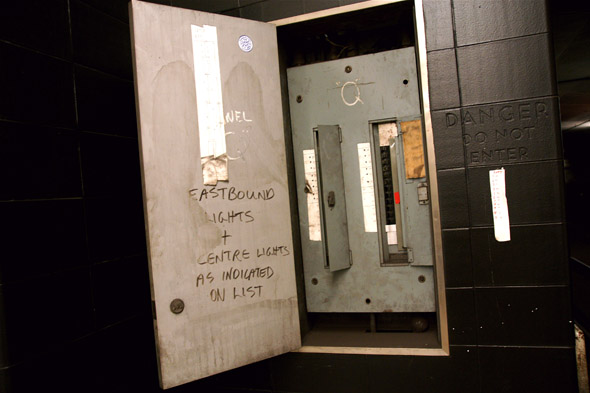 What appeared to be a light instrument panel known as "Q" was swung open and inviting, but I thought I'd dare not meddle with the buttons. 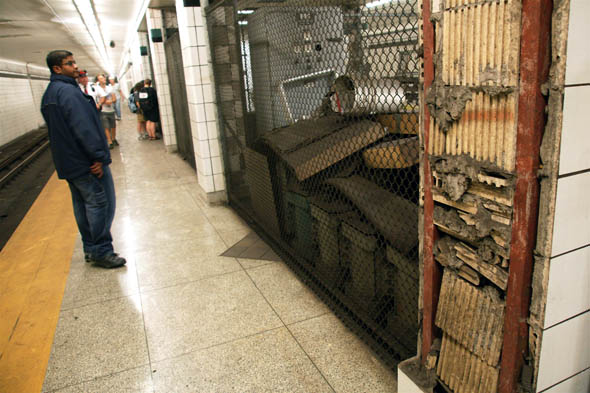 A little towards the centre of the platform housed a fenced-in area where maintenance crews stashed miscellaneous objects from the tunnels and nearby stations. 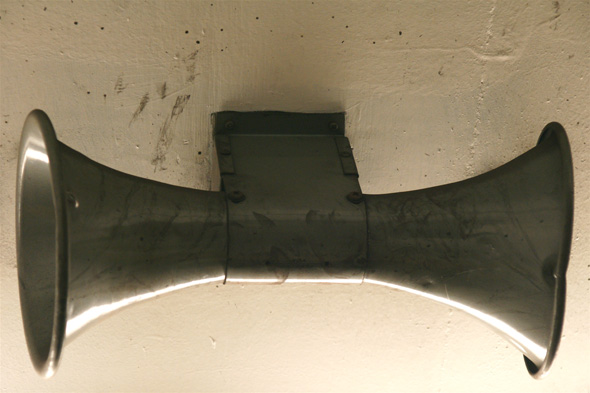 The TTC is planning to have more tours available in the coming months, with hopes to have 14 tours offered in 2010, including a couple of new ones. A few weeks ago I attended a tour of the TTC Operations Training Centre, where I got to try out their million dollar TTC bus simulator. 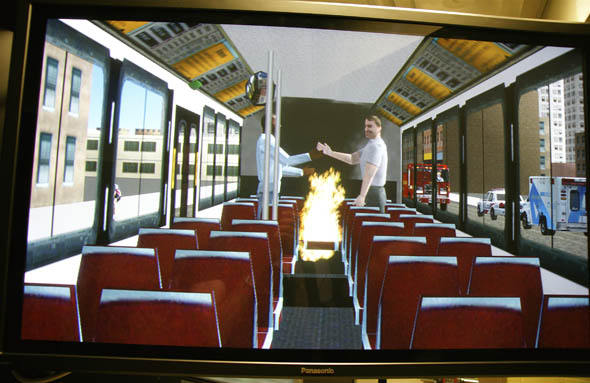 Strangely, there was a video program that created a fight and a fire on the bus, through the driver's rear-view mirror, to prepare a TTC driver trainee how to react to such a situation. That situation became reality earlier this week, as a bus was set ablaze at 2:45 a.m. on Yonge St. near Bloor. The $700,000 hybrid bus is likely a write-off. More on the TTC OTC Tour in a future story on blogTO.