While waiting for the bus in forty-degree weather, I kept reminding myself that I would be in air conditioning soon. Cold air conditioning on a TTC vehicle is just as rewarding as an ice-cold beer on a hot day. I didn't have to wait too long. Thankfully, it came as scheduled. After boarding, I glanced around and saw a lot of shiny faces. Commuters were fanning themselves left, right, and centre. There seemed to be no air conditioning circulating. Before sitting down, I went to open a window and discovered it had been nailed shut - on an almost brand-new diesel/electric hybrid.

I had to find out what the deal was. Approaching the driver, I noticed she had a fan by the window, but I could see it was not helping her. Everyone was drenched in sweat. I asked the driver why the windows of the $734,000 hybrid were in the condition they were in. She told me that "the windows on the hybrids have been popping open especially on sharp turns," and the "TTCs solution is to nail them closed" instead of repairing them properly. She continued, "buses with these faulty windows are a nightmare for commuters and operators alike."

TTC policy states that employees can request a switch-off (different bus), but this driver had not yet received one. She continued, "it is frustrating because customers get angry with us, the drivers...as if it is our fault. We're just as angry really. I definitely don't enjoy driving without a/c." Adam Giambrone once stated, "Our 1.5 million daily riders will feel the difference with our new hybrid buses." But I don't think this is the difference he had in mind.

Having windows fly open is inconvenient during anytime of the year, but is particularly bad in extreme conditions. In the summer, the air conditioning escapes through the windows. In winter, the heat escapes and cold air comes in. This makes bus rides extremely uncomfortable for both drivers and commuters.

I asked a woman fanning herself what she thought of our bus, "...you know, I have no problem taking the TTC, and it's usually a really good experience. But when I get on a bus like this, I can't help but be upset. They're (TTC) constantly raising fares. They strike. It's annoying. I would have no issue with paying more, if service was reliable. If I got on buses, and subways, and streetcars...and they were all air conditioned, I would have no problem." 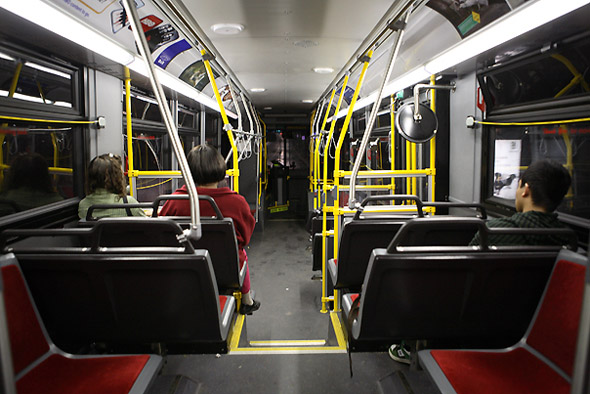 This has not been the first issue to arise regarding these vehicles. It wasn't too long after the Daimler-owned Orion buses hit the road that problems began to arise. (Though, it is not uncommon for transit companies to run into problems with new vehicles). In May of 2008, it was reported that the lead-acid battery cells were actually lasting half as long as promised, and buses were producing half the expected fuel savings. But these issues were quickly resolved.

By the end of next month, the TTC will have nearly 700 diesel/electric hybrid buses which make up approximately one third of its fleet. Making Toronto second only to New York City in regards to the amount of hybrid buses in service. I have great faith in the TTC, and I believe that once they have worked out all the kinks, hybrid buses will be the new definition of "the better way."

Lead photo by XenonPulse, second photo by jxu photo, both of Flickr.