I have a soft spot for community radio. Where else can you hear programming by and about sex-workers, psychiatric survivors, independent artists, ethnic communities and other voices that mainstream radio doesn't include.

So, it was news to me when I heard about the drama threatening another of Toronto's alternative radio stations, the University of Toronto's CIUT.

While infighting, lawsuits and arrests led to dead air at Ryerson's once progressive CKLN, the U of T's community radio station was getting the boot with no appropriate home in sight. Lucky for CIUT, the boot turned out to be a major upgrade. 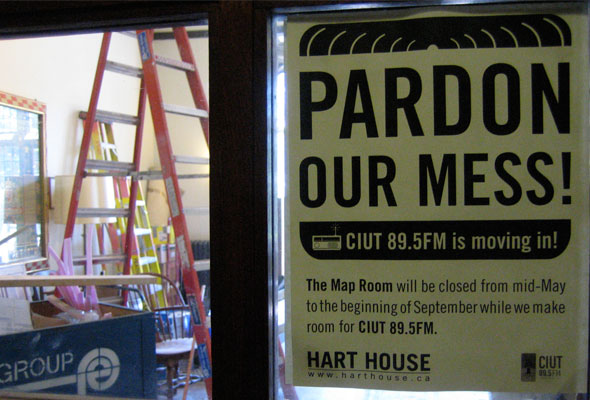 CIUT is moving into a $1.3 million renovated space at Hart House this month once construction is complete. The station will occupy a section of the first floor and all of the third floor.

"We knew one day we'd be asked to move," says Brian Burchell, CIUT's station manager for a decade. The Rotman School of Business is expanding and taking over the Victorian building that CIUT aired from for most of its existence. It was a long fight to find another appropriate space for the forty-year old radio station. At one point, the university offered the basement of one of its off-campus buildings beside the offices of custodial staff. Burchell wasn't thrilled.

Then Hart House entered the picture. The campus' commuter student space, known for its library-like quietness, wants to increase its traffic and relevance to campus life and the surrounding community. Community radio, say hello to the archery club.

Burchell says the new location will be an experiment in radio. He describes the first floor set-up at Hart House as stage-like versus the usual studio-as-fishbowl effect, where you can watch the show outside of the studio's enclosed glass. Instead, a sliding glass door will be there to divide the live-to-air studio from passersby. But Burchell intends to keep it open for all to see.

"Live radio is a dying commodity. Why not put it on stage?"

He's doing it to make community radio (literally) more accessible. Hopefully, this gamble pays off as more conversations surface about the relevance of campus radio stations: do they serve the surrounding community or the student body?; are they getting too corporate?; etc. 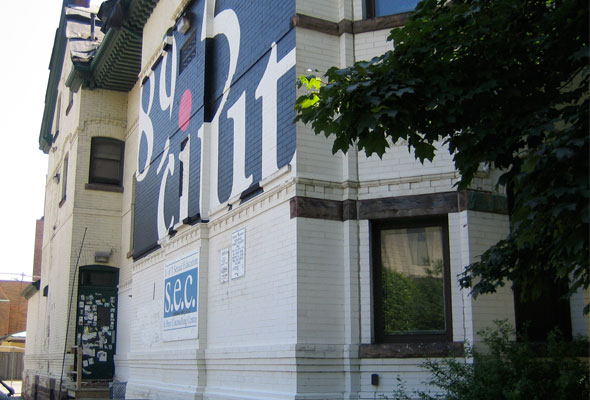 But this story isn't all about happy endings. CIUT's old home is going to be demolished to add Rotman's 10-storey expansion. In the original plans, the building's faรงade was to be left intact.

Burchell says he isn't going to miss the old building. "Running a radio station is hard in an narrow, old Victorian...When we'd forget something for the studio, we'd have to run up and down all those flights of stairs. I definitely won't miss those stairs."