The Eglinton LRT Needs a Re-Think

With the preliminary planning completed, final details about how the Eglinton Crosstown LRT will operate are being solidified. Right of way, street level noise, and construction are just some of the issues that are keeping the project from completion. I have a strong feeling that this proposed route will cause a lot of controversial debate and anger in Toronto over the next few years.

There's no doubt that the St. Clair LRT has caused many headaches over the last few years -- in terms of construction and implementation. So much so, that in 2005 construction was brought to a complete stand still. The issue was quickly resolved, but lasting effects among local businesses and residents still exists. Now that the St. Clair line is under control, the focus has shifted to Eglinton.

The solution? Instead of a vehicle making a left hand turn at a major intersection, motorists would make a right turn and temporarily head in the opposite direction. After having done so, there would be a section of road designed for them to make a U-turn to cross back through the same intersection in the proper direction. The TTC is designing these re-routes to accommodate vehicles up to the size of a delivery truck. Compared with the current U-turn implementation on St. Clair, this sounds like a marginal improvement to me. 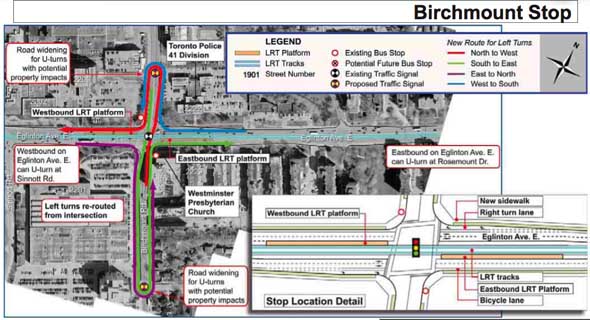 Although this is only for the above ground sections, I can also imagine this will create more chaos than necessary. To accommodate the U-turns, traffic lights must be added north and south of the stops in question. Ten major intersections are to be affected on the outer east and west stops on the line. I used to, jokingly, think the TTC was making it difficult for motorists on purpose -- probably to get people out of their cars and onto the LRTs. But the more I think about it, the less absurd the notion seems.

Another problematic issue is the street noise and vibrations that will be created by the LRT. Many who live near current streetcar routes can attest to the sounds the trains make. This noise is usually attributed to streetcars grinding their tracks as they turn or stop. The TTC claims "the LRTs will run at about 68 dB, two decibels less than current busy street traffic sound levels." The Ministry of Environment and TTC are currently investigating residential areas in order to reduce the amount of noise pollution. 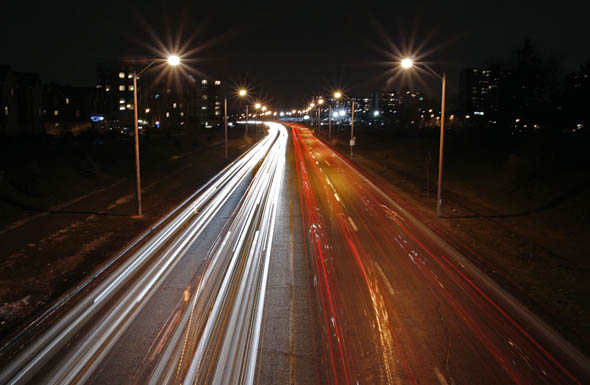 Over the past 50 years, Eglinton has always been proposed to provide faster transit. In the 1960s, a highway was to be built on the street but was scrapped over funding and usage problems. In the 1990s, construction began on a tunnel from Eglinton West station to extend the subway. This was immediately stopped when the new Premier of Ontario, Mike Harris took office. It seems that anytime a transit project arises on Eglinton, it gets shut down for one reason or another. Although I'm sure there will be some headaches, I hope by the end of 2021 the Eglinton LRT is fully functional.