It's been a year since the Sunrise Propane explosion that left two people dead and 12,000 temporarily homeless in Toronto, and things are still a mess.

One resident trying to rebuild his damaged home feels shafted by the city's bureaucracy and potential $30,000 out-of-pocket fees; Sunrise Propane is still working in the industry despite being shutdown after the explosion. Where's the justice?

I wondered if the city could offer a sliver of accountability to this story. I looked into whether we recouped from Sunrise Propane the $1.8 million the city spent cleaning up the asbestos-strewn neighbourhood after the August 10, 2008 explosion. Sunrise didn't move fast enough, so the city had to step in. 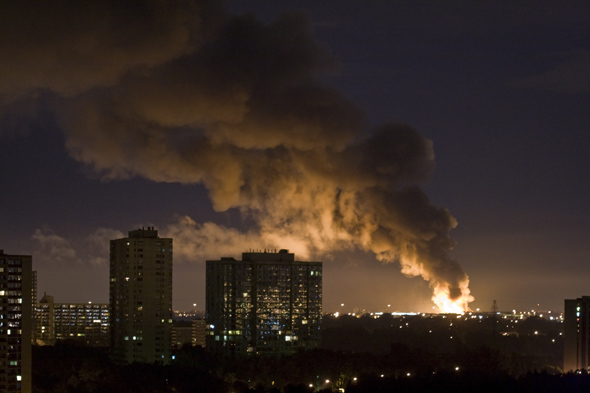 As it turns out, our cash-strapped city is only now starting the process of getting its money back. A staff report dated April 2009 asked the city to give their legal representatives the power to proceed with getting reimbursed by Sunrise. It was passed by council.

The province paid Toronto half of the funds and the city will pursue the remaining from Sunrise. I asked Robert Andrusevich, a city spokesperson, if there's a chance we won't get paid. I got the impression he doesn't think this will happen. Andrusevich said he can't talk about the city's legal strategy but stressed they intend to pursue the funds owed them for cleaning the neighbourhood.

During an interview with the Star last year, Mayor Miller wasn't as optimistic and admitted the city might be on the hook for the remaining cost. I hope Miller's wrong. I mean, taxpayers bailing out private business? Isn't that unheard of?

Hopefully, Sunrise will have to cough up some funds, at some point. Media outlets reported this week that the Ontario Ministry of Labour laid two charges against Sunrise Propane. The charges allege the company didn't ensure the Downsview propane facility met industry regulations and that it failed to protect the health and safety of its employee, Parminder Singh, who died during the explosion. Sunrise could be fined a total of $1 million.

Sunrise is also facing at least one class action lawsuit totaling $300 million by residents affected by the explosion.

Second photo by ONT Design, top photo by Daniel Cooper, both of Flickr.