After a decade of entertaining, Scotiabank's BuskerFest Toronto 2009 edition kicked off yesterday with the Mayor, some cake, and a world record broken in order to celebrate its anniversary. Over the years the festival has made its mark; it saw approximately one million visitors from all over the world just last year.

This year it started with Mayor David Miller riding in on a giant contraption (for lack of a better word) followed by a cake cutting ceremony. And then (no offense, Mayor) the really exciting stuff began. 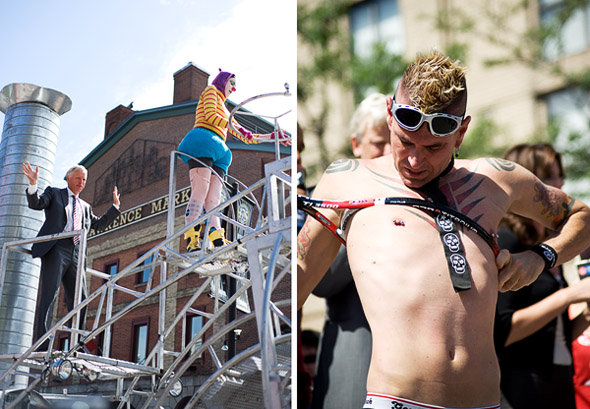 Al Millar, also known as Alakazam, broke one of the crazier world records as he passed is body through a tennis racket three times in thirty seconds. Being the Michael Phelps of contortionists, it's no surprise that he's won BuskerFest's People's Choice for the past three years. 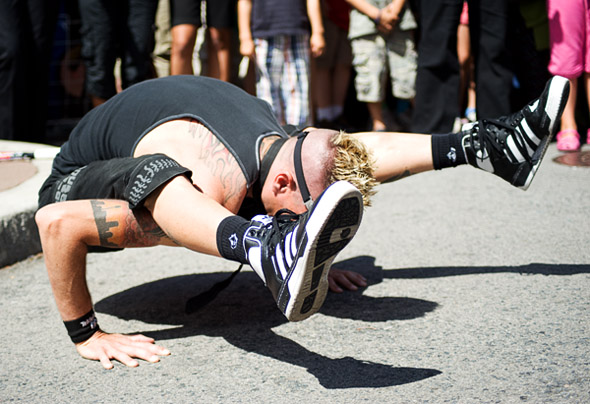 As one of the biggest festivals of its kind in North America, Toronto's BuskerFest hosts over 50 of the world's top international street performers. It's the place to be for those who want to see acrobatics, magic, juggling, fire, and generally people doing dangerous things.

While they're performing, all of the artists are jokers. They work hard to draw a crowd and then keep it entertained for anywhere between thirty minutes to an hour. Watching them, it seems like their energy is boundless as they talk circles around their chosen victims drawn out from the audience.

So when I approached a few performers for a quick chat, I was more than a little intimidated. To my relief, they were all incredibly nice and attentive as I stumbled my way through some questions that I should have more time planning. 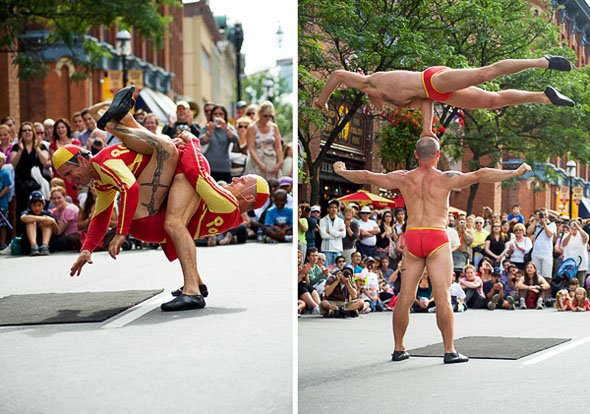 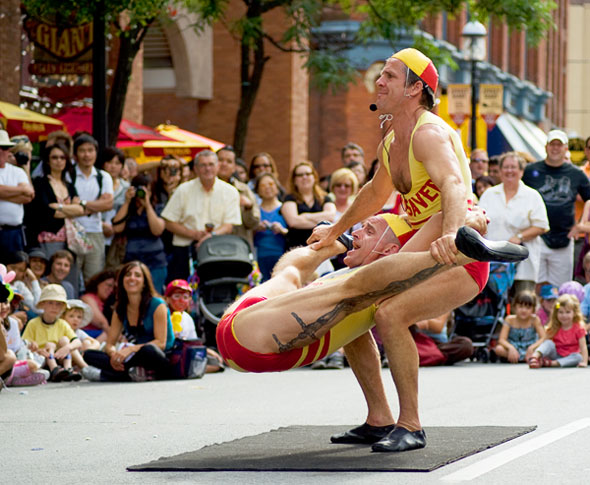 Popeyed (pictured above) is an acrobatic duo from Australia. Both Mark and Rudi are 42 years old and put most bodies half their age to shame as they bend in half and lift each other with seemingly little effort.

One would think they have some sort of advantage, like a childhood spent doing gymnastics. Not so much. They got their start by attending circus workshops in their 20s, began working together when they were 31, and the rest is history.

Mark admitted that he was fairly shy when he was younger and never saw himself becoming a performer. Who would have thought this would come from the guy strutting his stuff in form-fitting spandex in the middle of the streets of Toronto? 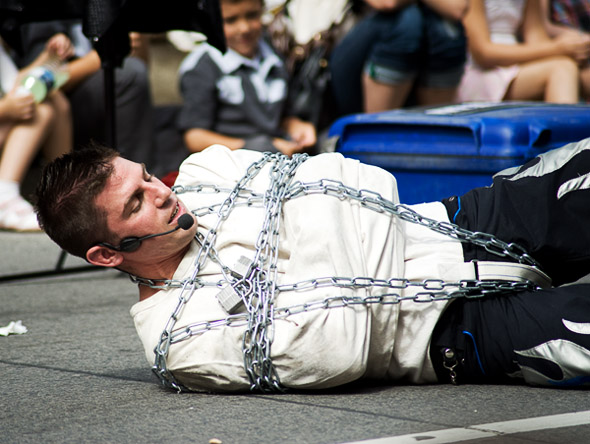 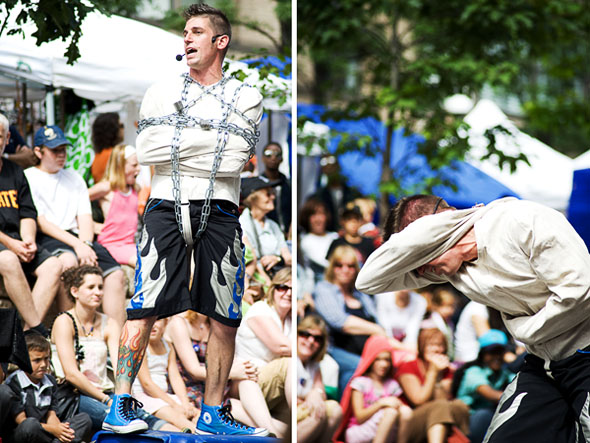 I also managed to chat with New York's Magic Brian as he was finishing up a great performance. There's no doubt that he loves what he does, although he describes it as "a hard way to make an easy living." I'm still pondering that one.

Brian got his start by doing magic shows for kids while he was in his teens, which progressed into performances at comedy clubs, variety shows and circuses. When I asked how his family felt about his chosen career path, he told me that they supported it although his mom was concerned about the lack of health insurance.

His performances eventually evolved to incorporate aspects from sideshows, such as sticking nails into his head and eating light bulbs. Most of these skills were acquired through trial and error. No wonder mom was worried about the health insurance! 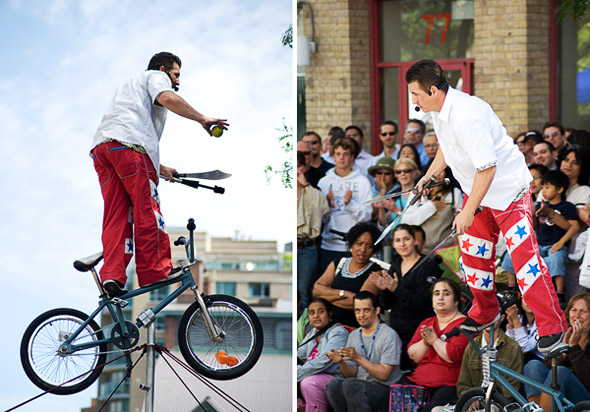 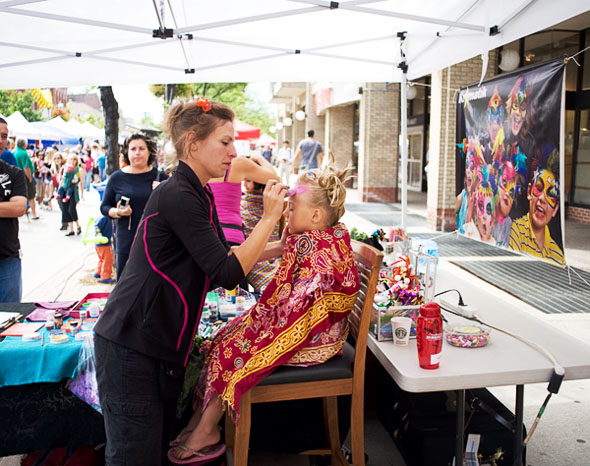 Entrance to the festival is free, although they do ask for a donation that will go towards supporting Epilepsy Toronto. It's all for a good cause! The performers also always appreciate a little love, whether it's a $10 bill or a handshake.

With the entire weekend still to go, BuskerFest is in full swing. Tonight features a fire show that is guaranteed to be amazing. It's the perfect place to take family and friends with all of the great food, countless activities for kids, vendors showcasing handmade crafts, and an endless stream of wild performers. 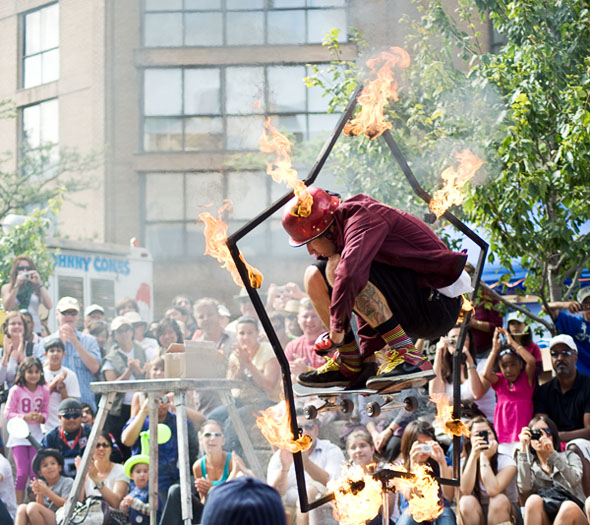 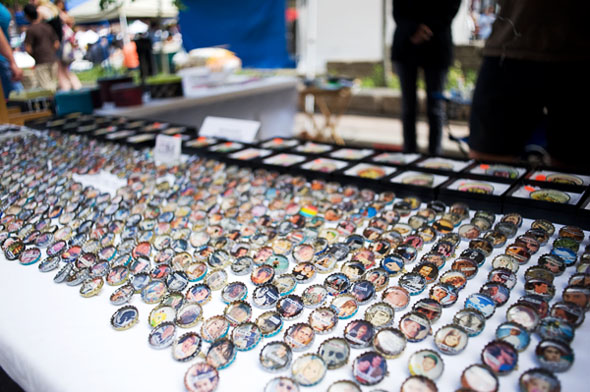 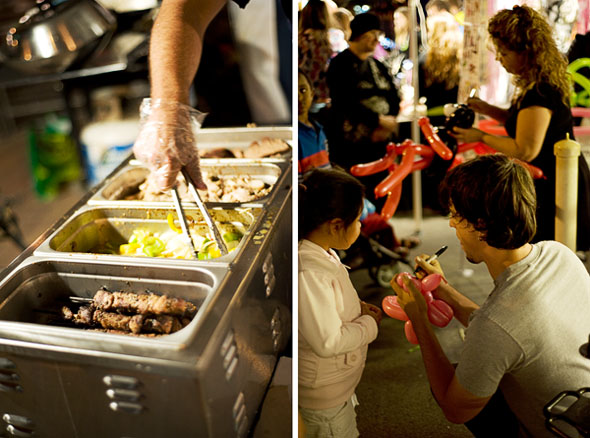 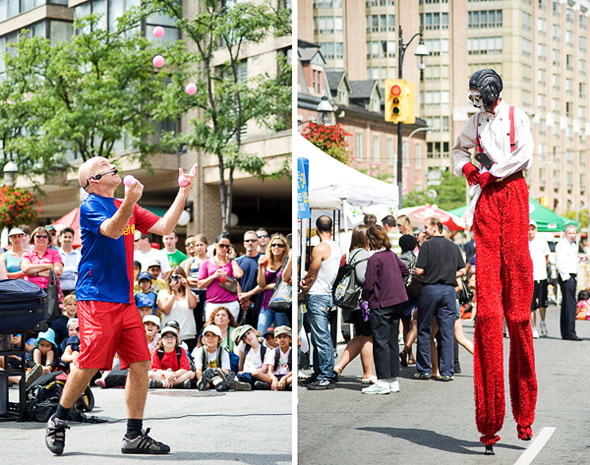