The Best Place to Learn Graffiti in Toronto?

There's a spot halfway between Castle Frank and Broadview Station on the Bloor-Danforth TTC line that takes my breath away. I'm guilty of being an east sider, so every time I pass over the Don River on the Bloor Street Viaduct, a little part of me freezes inside and prays for the train to stall. It's the same feeling I used to get on the Skyride floating up Grouse Mountain in Vancouver. I suppose what gets me is the way urban and natural vistas spread out before you and both the city and nature mix together like the organic ingredients of the best chocolate cake you've ever tasted.

It also happens to be the greatest and safest spot in Toronto to pick up a can and paint for all to see. Call it the largest, most trafficked canvas in the city. 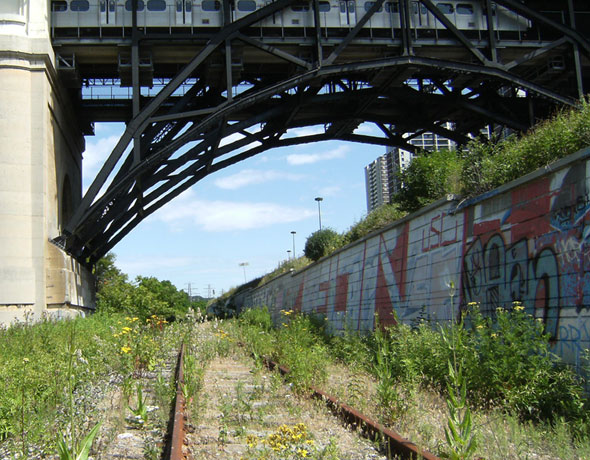 Now I've done graf before. But nothing to write home about. I covered the restroom at MIT in Boston with "No One Is Illegal" Sharpie pen and skirted big brother during the '08 election by tagging an advertisement for President Obama's White House in a prominent spot on Sherbourne Street. No biggies.

The element of danger and the potential of unfiltered political message is what hooks me. Clearly, I'm no Turk 187, books or even Serius Gramz, but I've got my heart in it. I grew up in a small art gallery in suburban Burlington surrounded by the rigidity of Robert Bateman and Trisha Romance so the haphazard angles and sloppy stains of aerosol keep me entranced. After seeing that huge new Michael Jackson mural on Richmond Street @ Harlem Restaurant, posting about graffiti here on BlogTO.com seems like the right way to publicly dive head first into the medium.

Graf is fairly untraceable. Sure, using your debit card to buy paint and nozzles at the art store around the block from where you plan to paint might not be the most effective way to guarantee anonymity, yet finding the best place to dip your toe into the vandals pool requires a certain element of safety for the rookies (ahem...me). Especially if you feel like escaping a few hundred dollars worth of fines from the men and women in blue.

Use cash and pick up your paint before dropping coins or tokens at your favorite transit boarding point. Disembark at Broadview Station, head north to Pottery Road and west down into the valley until you get to the Don Valley Trail adjacent to the Don River. From here you'll be heading south for about three quarters of a kilometre before arriving at a dusty spot just beneath the Prince Edward AKA Bloor Street Viaduct.

After scampering up the hill to the unused CN Rail line by the east retaining wall, the first thing that'll clue you into finding Toronto's Ground Zero of Graffiti are the piles and piles of rusty ol' spray cans. Probably a major sign of progress that where once laid discarded household rubbish and beer cans now lay the spent tools of art, message, colour and communication. Remember that dozens and dozens of people have taken their lives from the bridge above so certainly there is a ghostly and surreal vibe to navigate.

Step gingerly over the unused railway track - hell, you just can't tell if the overgrown weeds and grass here might give way to some speeding diesel train the very first time you embark on an art mission here. Pick your spot wisely. Bring cheap gallon cans and rollers from Rotblotts if you plan on making a new surface. Some graf etiquette requires of artists not to damage previous works, but if you've ever admired these urban murals from above - vandalizing vandalism is the only way to gain your novice rep - and this is for sure the first place to paint if you want impact and eyeballs. 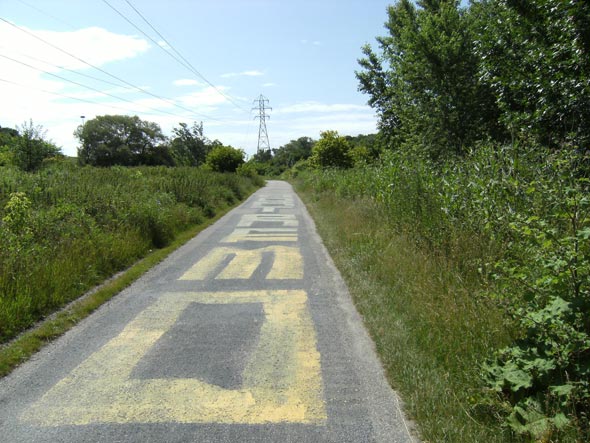 There is untapped potential on the unpainted surface of the bike trail for huge works visible to the thousands who travel above daily on the subway.

Don't blame me but you should realize that the City of Toronto employs a "five-pronged approach" of "leadership, prevention, eradication, enforcement, and community empowerment" when dealing with graffiti so keep on the lookout for bicycle cops amidst the dragonflies and joggers who frequent the area. Ultimately, for anyone who has traveled this area before, you'll recognize that this is a nudge-nudge wink-wink safe spot to create.

Besides, afterwards you can celebrate with a completely legal bonfire at the firepit up near Taylor-Massey Creek.