At almost 25 kilometers in length, the 501 Queen is one of the TTC's longest routes. It is definitely one of the quickest ways to see much of Toronto in a few hours. As a kid I remember telling my parents that I was going to play at the park with friends. Once there, we would pool all the money we had and catch a ride on the 501. We weren't going anywhere specific; our eyes just wanted to see the city we never had the chance to see on our own. And it didn't matter that it was through the window of a streetcar.

Looking back at those experiences, I can't say it was the safest activity to do as a child, but it's certainly one that I'll never forget. Now that there's a resurgence of the idea of splitting the route into two, I'm not complaining. Although the trip is visually stimulating, there can be severe delays. If you've ever tried to use a schedule on the 501, you'll quickly realize how unreliable it actually is.

Traffic, detours, and construction are among just a few reasons why the 501 streetcars are almost never on time. In October, the TTC is planning to split the route into two - a trial that will be in effect until the end of the year. One route will depart from Long Branch and come back around at Parliament; while the other will start at Neville Park and find loop back from Shaw St. The goal of the project is to see if overlapping routes will alleviate congestion.

Riding the 501 many times, I've witnessed the traffic horrors first hand, but never fully understood how bad traffic can get backed up. I usually jump on the first streetcar that comes - never truly knowing how far back the next car is. This is why last night I decided to sit at the Humber Loop to see how often each vehicle came. I was looking at streetcars going westbound specifically because they would most likely accumulate the most problems.

So during rush hour I waited, and waited some more. After nearly 25 minutes, the first car finally came. As that vehicle was leaving to continue on route, another one came to let passengers off. This second streetcar pulled into the loop as a third pulled in, then to my surprise a fourth. Within 10 minutes, four vehicles had come and gone and for the next 35 minutes Humber Loop was a streetcar ghost town. This pattern would repeat itself for three hours until I called it quits. 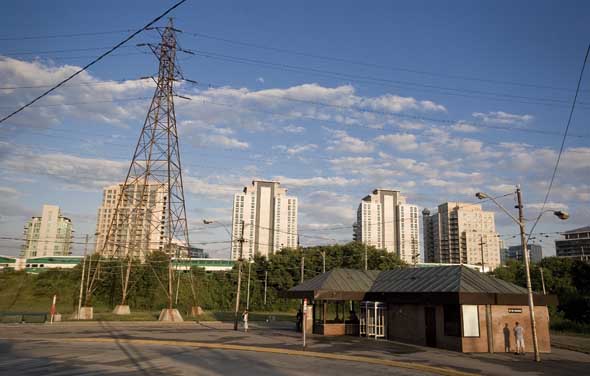 While watching, I asked a few operators what their thoughts were. One TTC operator, who wanted to remain anonymous, said "the backups cause me to rush my breaks at either end of 501 due to the amount of people waiting there." He went on to say, "...in an 8-hour shift, I may only get 20 minutes total in breaks." It seems that the length of the route is not only affecting customers but operators as well.

Although the 501 will always have a nostalgic place in my heart, after seeing it from a different perspective I've come to the conclusion that it needs a defiant overhaul. Luckily, I don't depend on the route daily anymore, but I definitely feel sorry for those who do. National Geographic voted the trip, as one of the world's top 10 most beautiful streetcar routes. Hopefully the project in the fall will fix the 30-minute gaps in service, even if our city has to divide one of its most eye-catching routes.