Roommate: we're using the word more often these days. Despite the economic downturn, Toronto rents don't seem to be dropping, and people who thought they were free of shared apartments suddenly have roommates again. No wonder Oonagh O'Hagan's recent book, I Lick My Cheese: and other real notes from the roommate frontlines is so popular.

Trevor and Geri have been friends for years and were pretty sure the other person's quirks wouldn't bother them. And this apartment just above West Queen West seemed perfect. "Not just for the wicked location," says Trevor, nodding out at Trinity-Bellwoods Park, "but also it had a bit of sentimental value, because I lived on Gore Vale Avenue in 2004 and it's my favourite street in all of Toronto."

The shared apartment made economic sense: Trevor was just coming out a relationship, and Geri needed to save cash. And what's more, the new landlord didn't seem worried about Geri's rambunctious cocker spaniel, Chloe. So last November, they signed the lease and laboriously dragged their furniture up the skinny stairs. 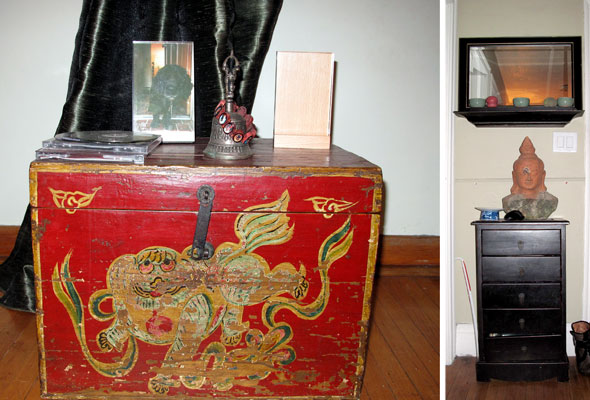 They set up their respective sofas kitty-corner in the small living room. Trevor took the attic bedroom--bigger, with more privacy than the other bedroom. That was okay with Geri--she didn't like the narrow, steep staircase that led up to the attic room. She took the bedroom beside the kitchen. Geri's dog initially had the run of the apartment, though after an unfortunate pooping incident, Chloe was barred from the attic.

"Obviously, the layout was conducive to sharing between two people, but what sold me was the neighbourhood--and with the dog in the house, the park, especially," explains Trevor. There's a comfy wicker sofa on the front porch, where we sit, looking across at the green expanse.

"For me, living here is about as close as it gets to my roots, as close to a European feeling as you can get," he says. "That means a lot to me--having my espresso on the bench in front of Ella's and my local Portuguese grocery with the Elvis bust, and the lady behind the counter who reminds me of my grandma in Croatia. And the life in the park." 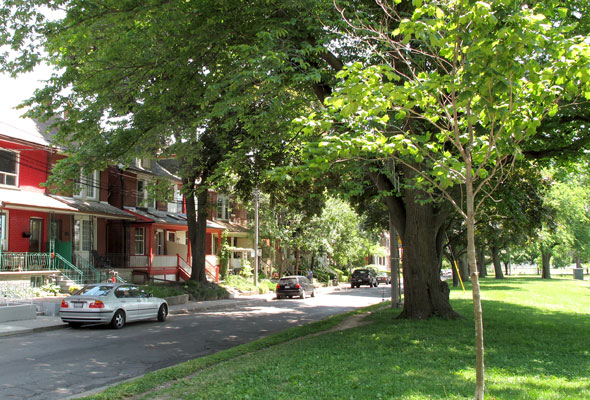 And yet even the perfect 'hood, and his favourite street, hasn't guaranteed a good roommate experience. Trevor admits the problem should have been obvious from the start: "We're both types that need a lot of privacy, so ultimately we end up hanging in our rooms."

Geri tried to make the living room more personal by setting up a shrine-like space, arranging art and souvenirs from her different travels. But Trevor feels their hearts just weren't in it. "[This apartment] is clearly a temporary solution, in that neither of us really has made a home here."

I see why they're feeling cramped for space: there's no way two people can pass in the hallway. "It's a classical Toronto narrow corridor problem," says Trevor shuffling past to get to the living room. Though the apartment is well laid out, the narrow house just doesn't give a sense of space to any of the rooms. Small windows aggravate the problem (the house suffers the curse of so many windows in Toronto--that upper fixed pane, with two tiny sliding panels below).

What's more, Geri's bedroom is between the living room and the kitchen, so she lacks any sense of privacy. She also lacks closet space: she keeps her coats stored on her bedroom door, making it impossible to open or close the door properly.

We try to sit in the kitchen, but eventually the claustrophobia gets to me and we migrate back outside to the front porch. "This [the outdoor sofa & table] has been done quite recently and I like it," says Trevor. No wonder--the porch looks directly out at the trees of Trinity-Bellwoods.

Someone walks their dog into the park (Chloe barks optimistically from above), and for a moment, I understand why Trevor and Geri thought they could share this place and turn it into a good home. By September, a new pair of roommates will be squeezing their lives into the skinny apartment; both Trevor and Geri wish them luck. 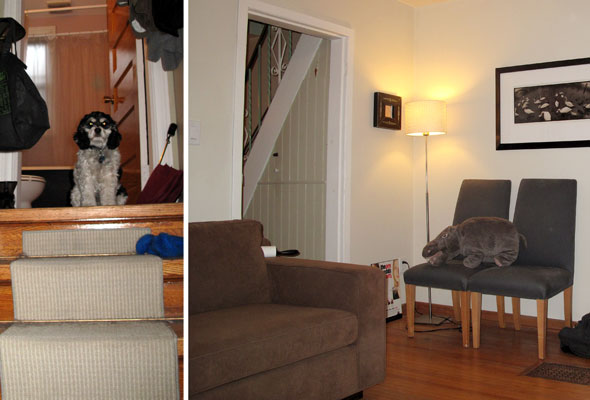 6 home questions:
What do you love most about your home?
"The neighbourhood."

What drives you crazy?
"The kitchen could be bigger, because we both love to cook."

What's your favourite place in your home?
"The front porch."

What do you like best about the neighbourhood?
"I can't leave the West End, I feel I belong here. I can't see myself anywhere else--walks in Kensington Market, dim sum in Chinatown, all those things."

What's most surprising about this home?
"I expected the water pressure in the bathroom to be bad, but this is truly atrocious."

If your home were a kind of fruit, what would it be?
"A green apple."