Queen's Park was the colour green yesterday as Torontonians participated in the global day of action in solidarity with protesters in Iran. Green is the colour of Iran's protest movement.

Since the re-election of Mahmoud Ahmadinejad, many in Iran took to the streets to contest the election and demand democracy. Protesters are being arrested, beaten and killed by the hardline Iranian regime. Neda Agha-Soltan's you-tubed death became the symbol of this struggle.

Yesterday's events started with a rally at Queen's Park that eventually moved to Queen Street. It continued with a global hunger strike and a candlelight vigil. 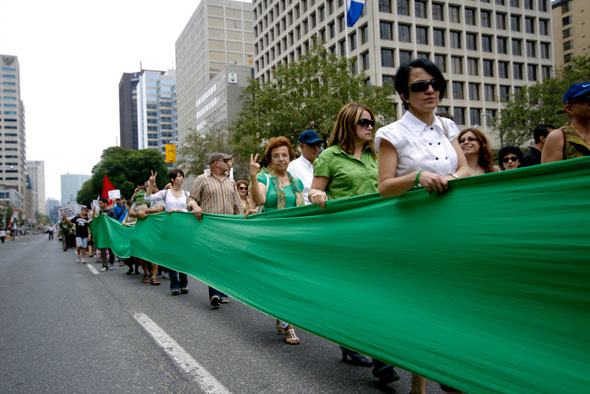 I attended the peaceful rally that felt tense at some moments. A small group of Shah supporters holding the pre-revolutionary Iranian flag and shouting "Down with the Islamic Regime" was drowned-out by chants of "Peace" and "Human Rights in Iran" by the larger crowd in green.

I bumped into friends who told me the organizers asked that no one bring their political flags. The point of this global movement is not to support any one candidate or political faction, but for the release of political prisoners and the right of peaceful protest in Iran.

I spoke to Ali Karimzadeh Bangi before the rally. He's the founder of "Cyclists for Human Rights in Iran" and he stressed the same message. He and about 26 other Torontonians are cycling a total of 450km to Ottawa for human rights. They partnered with Amnesty to deliver a petition with almost 4000 signatures to the Iranian Embassy in Ottawa. They're delivering it on Monday at 2pm.

They pedaled to cheers and support from the largely Iranian-Canadian crowd yesterday afternoon. Some cyclists accompanied them for a few kilometers within the city's boundaries. You can follow their journey this weekend on twitter. 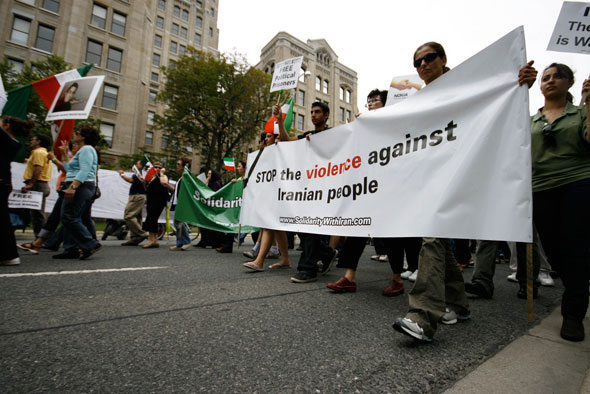 Toronto was just one of over 100 cities that participated in the day of action. Speeches during the Queen's Park rally in Toronto were optimistic that this weekend is not the end of the global solidarity movement.