Working in the Yonge & Bloor neighbourhood definitely has great advantages: huge selection of restaurants, nice choice of retail, and free samples and promotions all over the place. But very few things could possibly compensate for the omnipresent construction that has consumed Bloor Street for over a year.

I started working in the area about a year and a half ago. From what I remember, you could still park at the meters on Bloor Street in 2007. However, in May 2008 construction went full-blast and the transformation of Bloor Street began.

A part of the street has been taken away from the traffic in order to accommodate crowds of pedestrians and flowerbeds. My daily trek to work became increasingly interesting, as construction fences were moving constantly from one side of the street to the next, and you could never predict what route you might be taking the next day! But the noise and the dust from drilled asphalt became contributing factors to an onset of headaches, and even the free facials from The Bay couldn't alleviate the stress. 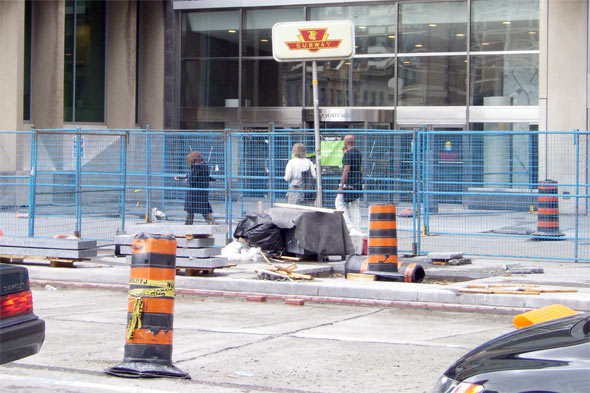 Never mind the things that are a work in progress... given that financial and scandal problems are abounding, there are growing (perhaps premature?) concerns that what was supposed to be erected at the corner of Yonge & Bloor (the Bazis International condo aka 1 Bloor East) may never come to be. Remember, a whole block of old townhouses housing local restaurants and retail had to be knocked down in order to make way for the Bazis mega-tower project. What would go it its place were it to all fall out?

The rumour-mill has this site becoming another city park or something like the Dundas Square - but who knows? 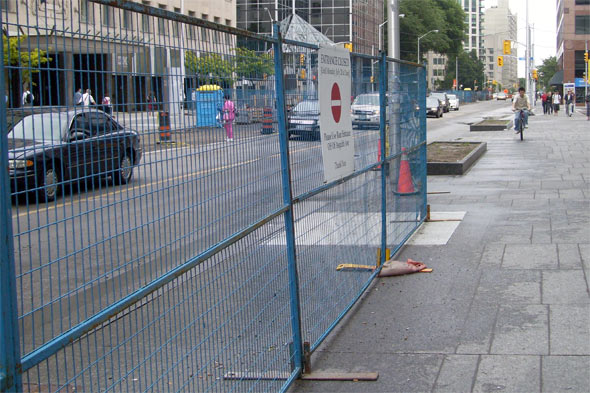 These thoughts are racing through my mind, as I brace myself for yet another trek down Bloor Street. And while the local restaurants and retail are recovering from limited customer access, in the midst of recession, my co-workers and I are hardly enjoying the sounds and smells of construction.

Bloor Street might eventually be a whole lot prettier on top, but right now, we're headed for the underground - a peaceful shelter from construction madness above.

Writing and photography by guest contributor Lana B.