A Look Back at Toronto's Streetcar Debacle

Mayor David Miller is still cleaning up the mess left in the wake of the TTC streetcar funding debacle. The full details of the deal have emerged, but the dust hasn't exactly settled. The $1.22 billion dollar deal with Bombardier was on the rocks in late June, but was saved at the last second by an emergency vote in city council on June 26. Although the project has got the go ahead, sacrifice had to be made to other areas in the city's transit system.

The original deal was to split the price tag among city, provincial, and federal governments three ways. Ontario agreed, and coined up $416 million in mid-June. The province agreed mainly due to the incentive that 5,000 direct, and 14,000 indirect jobs were to be created. With that in mind, the project started to make more sense to me. The streetcar deal seemed to be underway and moving ahead with full force until Ottawa became reluctant.

The federal government was reluctant to contribute claiming that the project failed to meet the criteria of the economic stimulus fund. I thought this notion was absurd, as jobs were being created, but the money from Ottawa never came. At that moment, the mayor was in trouble because a third of the price tag was missing. If he did not meet the June 26/27 midnight deadline, the deal would have expired and the price tag would of jumped another half billion dollars. Not to mention the city would lose the pledge of provincial funding alongside it.

On June 26th, city council held an emergency meeting and cleaned up the mess many felt David Miller made. The city dug deeper into its pockets and forked out another $417 million to fill the gap left by Ottawa. The contract was saved and Miller felt proud of his accomplishment, calling it one of his "proudest moments as mayor", but now he faces criticism from myself and other transit users.

Out of 2,700 other pending infrastructure projects, this was the only one that did not gain approval. In a two page rejection letter to the mayor, Infrastructure Minister John Baird wrote, "The project that your officials tried to submit clearly did not meet the criteria". I have a feeling the package may have been prepared in haste or carelessly. If the criteria is laid out, why wasn't it met?

Days later, the Kitchener/Waterloo area got their $790 million LRT system approved almost effortlessly. When this happened I raised an eyebrow. Former Waterloo City Councillor John Shortreed didn't see the justification due to their low population, and I didn't either. Afterward, Miller sent the minister a print of two streetcars (of different generations) passing each other as an attempt to "repair the relationship". All these events have led me to believe that something with the proposal was amiss.

There's no denying that the new European styled streetcars are eye-appealing and efficient, but I feel that there are more urgent projects to complete, such as the new LRT lines, or repairing the subway. Almost two weeks later, this catastrophe over funding is still fresh in my mind and that of transit users. Between almost fumbling the contract and the garbage strike, the mayor is skating on thin ice. 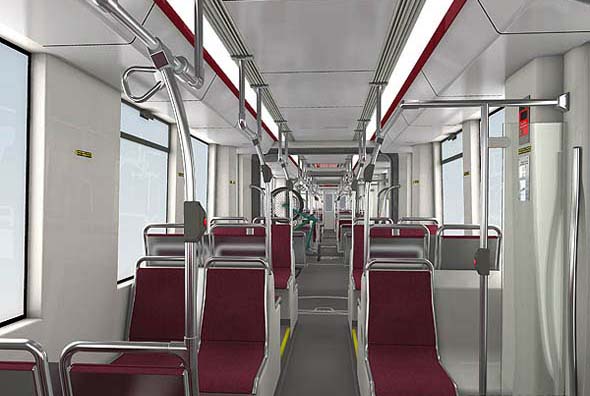 Simply put, the money has to come from somewhere. The extra third in funding was pulled from the Red Rocket's infrastructure projects. With the TTC needing to repair much of the system, money isn't exactly in abundance. For example, Eglinton station's re-modernization will have to wait as 204 new vehicles hit the city for now - the last of which should be here in 2018.

I'm not outraged, but I'm not exactly pleased either. The whole situation could have been handled much better, but the city will ultimately upkeep its title as being one of two cities in North America to still use street cars. In the end, the financial burden was placed on the backs of Toronto's taxpayers, but when the garbage clears and everything is said and done, maybe my criticism will subside. With Transit City still underway, eventually a financial bump will be hit. Let's hope that the next time the city needs urgent funding, Mayor Miller will not repeat his mistakes... because almost two weeks later, he is still being reminded of the mess he made.

Images are courtesy of Bombardier.