The Ghost of Bemelmans at 83 Bloor West

It's a gutted ruin now, but when I peered hard into the cavernous space at 83 Bloor West that was once a Versace boutique and will be filled with Hugo Boss by the end of the year, I thought I could see a faint shadow of Bemelmans, the bar that once occupied this spot many years ago, when I was a lot younger, and Toronto seemed like a place where things were going to happen.

I couldn't resist taking out my camera and shooting a few quick snaps when I saw the door wide open. Through a thick layer of construction dust I could see the much-celebrated mosaic floor that survived the two tenants that took over the Versace space, but probably won't fit into the Hugo Boss aesthetic. There's no sign of Bemelmans, though, unless something clings to one of the stripped-bare walls, or survives in some neglected corner of the cavernous space.

If you're under 35 you probably have no memory of Bemelmans; I'm 45 next month, and while I only went there a couple of times, it was the first certifiably adult place I spent my own money on food and drinks, while struggling through a trio of misbegotten years at U of T nearby. It only lasted a decade and a half, but it's fondly remembered by legions of now middle-aged or grey-bearded socialites, fashion types, urban queens and onetime suburban interlopers, such as myself. 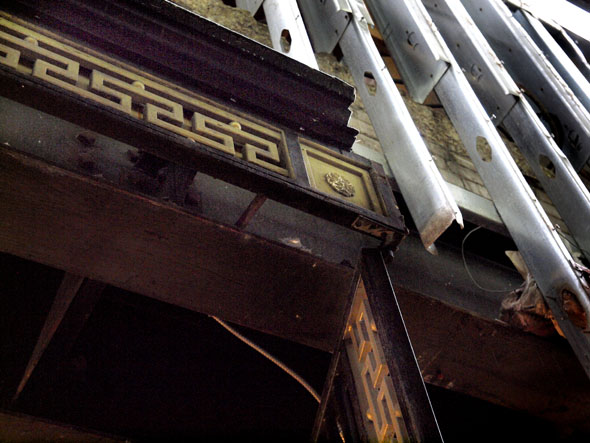 Besides the mosaic, there's a few scant neoclassical Italianate details from the Versace store clinging to the door frame or lying in piles on the sidewalk - quintessentially '90s remnants that were covered up by Indiva when they moved into the Versace space, and stayed buried when Labels 4 Less briefly took over the lease. I never liked the Versace look, all Eurotrash and South Beach sunburnt luxury, so I've always had the address bookmarked in my memory as Bemelmans, which I suppose makes me a very '80s kind of guy; I'm old enough now that it doesn't bother me.

The Bemelmans story is simple enough: Opened in 1977 by restaurant impresario Tom Kristenbrun in a former Roy Rogers, and decorated by Robert Noakes with marble from the old Eaton's College Street store. It was a "New York style" bar at a time when that meant something, and famously the first place you could stand and drink in Toronto. (This is where old-timers are supposed to bore you with tales of the city's fantastically uptight liquor laws. I won't, but trust me - they were ridiculous.) It was probably just past its prime when I first nervously waited for the maitre'd to seat me back when Bowie's big hit was "Let's Dance" and Klaus Barbie was arrested, but it felt - to me - just as worldly and faintly decadent as its more regular habituĂŠs remember it today.

It was the subject of a couple of fondly retrospective articles a couple of years back, when a Back To Bemelmans fundraiser was held for Casey House. I don't remember any of the media, society or fashion types who apparently made the place their hangout back then - people like Garth Drabinsky and Barbara Amiel, Elmer Olsen, Posy Chisholm Feick or Dean and Dan Caten - or the movie stars that made the place seem so glamourous when they unwound at the bar after shoots or during the film festival. I was the probably overdressed skinny kid drinking way too much coffee while talking up the girl I was madly infatuated with, wondering how I was going to pay for this and glancing nervously around at the smoky mirrors and black and white tile and thinking, so this is what adults do at night. It didn't seem like such a bad idea at the time. 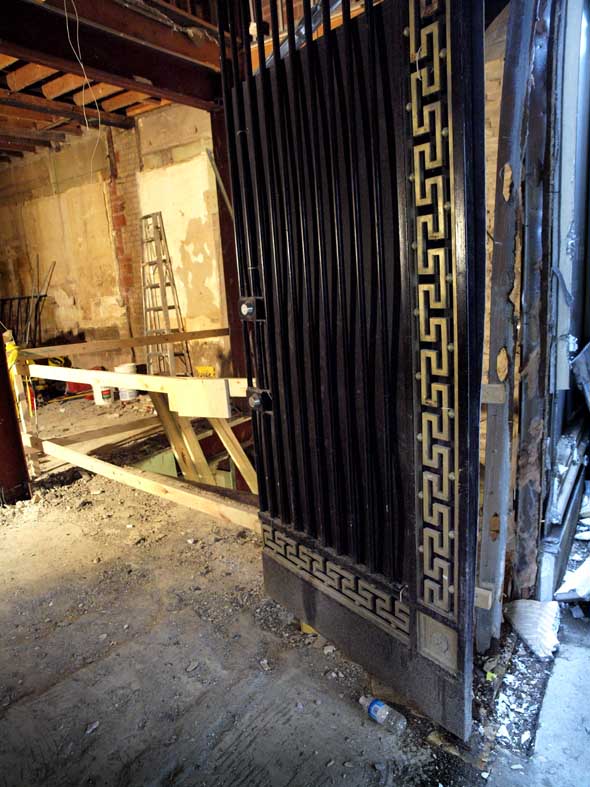