Photo: "Monday at the Office" by longboardliving, member of the blogTO Flickr pool.

An announcement from Harper and Obama is expected today, revealing details of General Motors' bankruptcy filing and fate. On top of giving the failing corporate giant a kajillion more dollars, Canadian and Ontario taxpayers combined are expected to be a 12% owner, and the US 60%. Isn't this exciting? We get to own a company that is losing money and whose incompetence (erase the EV1, commercialize the Humvee?!) is helping to kill the planet at the same time. Awesome that we're saving jobs and trying to rescue an economy though... I guess.

Two more power-generating wind turbines may be erected at Exhibition Place. Wouldn't it be great to have these all over (or surrounding) the city? Do we have any updates on claims that the vibrations caused by wind turbines is bad for our health?

Former US President Bill Clinton has given the Lower Don Lands revitalization project (a 25-year development that aims to renaturalize the mouth of the Don River, introduce a sustainable community that generates more power than it uses, etc) his endorsement as one the world's 16 "climate positive" initiatives. Now all we need is the kajillion dollars to make it happen.

Harper announced yesterday that new federal legislation will allow victims of terrorists to take terrorists and the states that sponsor them to court. Although my sense is that this is a move to make him look tough on terror (and sympathetic with victims), I'm not sure how much beyond symbolic this actually is. I mean, how likely is it that Al-Qaeda leaders are going to go to court and pay the settlement when they lose?

For the second time this week, police have recovered a body of a missing teen - from Lake Ontario, not far from where they'd been last seen. This time is was YorkU student Shane Fair, who had been missing since his school formal at Ontario Place's Atlantis.

Anyone else see the pot of gold at the end of the rare double rainbow (below) that Toronto was graced with this weekend? blogTO reader Patrick McMahon sent us this lovely view. More here. 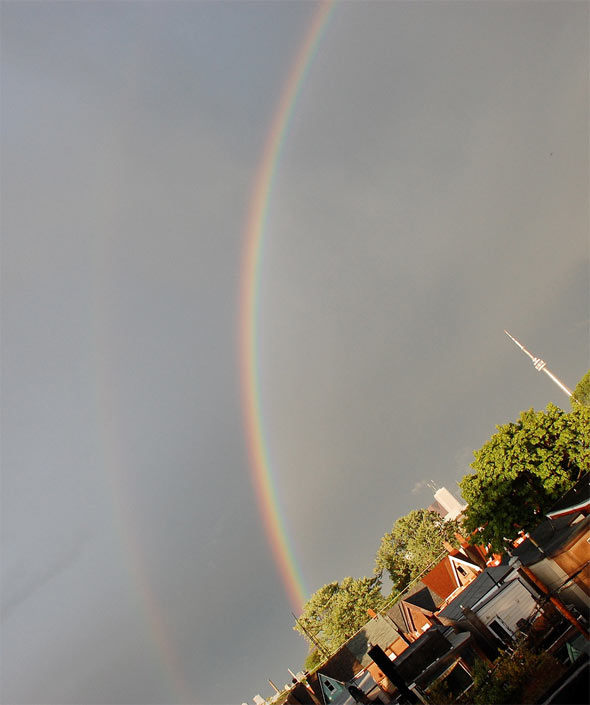