Rail expansion in the Junction corridor, to allow for two-way train travel from Toronto to Brampton and Georgetown, is a really long and noisy process. And it's not expected to be done until the end of the year.

It's almost as if the pile driving in the corridor has been a sneaky way to get west Toronto residents worrying about short-term issues with the Metrolinx Georgetown and Union-Pearson projects, rather than long-term ones. It's certainly hard not to focus on the immediate, when the incessant reverberations coming from the construction site create noise that is 32 times the safe level for human ears. Perhaps they're trying to pound the neighbourhood into submission.

Thankfully, a number of residents' associations, environmental organizations, concerned citizens, and others have formed a broad coalition to address both the short and long-term problems surrounding the plan and continue to press for alternative construction methods, more stations, and electric trains. 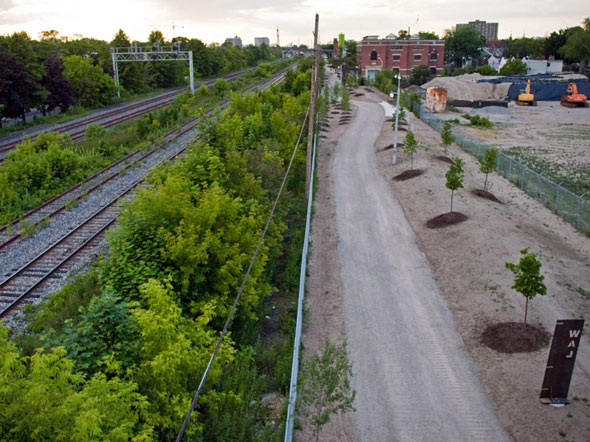 At the same time, there's also a cycling/pedestrian railpath being constructed, running along side the tracks between Dupont (at Dundas) and Strachan (just south of King).

I took a stroll along the portion of the railpath route currently under construction (phase 1, in green) and things are well underway, with increased landscaping and bicycle posts installed by the GO station at Dundas and Bloor.

However, there are legitimate concerns about whether the bicycle/pedestrian corridor will be able to continue south of Dundas. Friends of the West Toronto Railpath and many others are working hard to ensure that the railpath will be accommodated, which is very important to many cyclists.

So let's assume for a moment, no matter how naively optimistic, that the railpath project is able to continue down to Strachan and beyond. I see it now - a crisp spring morning, turning onto the trail at Dundas and Dupont and beginning my commute downtown. But wait, what is that noise? That's right, I share this space with the 300+ diesel trains that move through the west Toronto corridor every day. But it's not just the noise. Each morning I arrive at work with more particulate matter accumulating in my lungs and liver and kidneys from the trains that spew diesel fumes.

Roll your eyes if you must, but this scenario is very real. Despite GO Transit's recent announcement that it will 'study' the electrification of its system, there are no plans to implement electric trains at the outset for this expansion. The logic of building a diesel line and then converting it to electric in fifteen years is lost on me. The diesel monstrosity is going ahead unless residents and local organizations continue to mount resistance against Metrolinx. 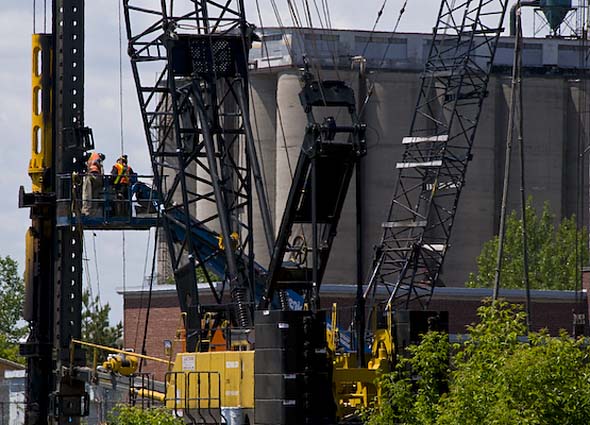 There have been more Metrolinx open houses conducted this month, but keep in mind that it is hard to engage in any 'real' dialogue at these events, which appear to be more of a PR exercise than anything else. Keep fighting - lobby the government, organize locally, and plan for direct action if necessary. My guess is that it will be.