On Monday, at about 4pm, I was driving northbound on Keele Street from the High Park area, and made a right onto Annette Street. To my amazement, the lane that was previously there was no longer there. I was driving in a bike lane. Quickly, I got into the car lane. The only car lane. Just last week there were two.

I hadn't heard much about the Dupont St. and Annette St. Bike Lane Plan since last spring, so its late arrival this week came as a bit of a surprise. As I drove toward Dupont St., I thought about how cool it was that a bike lane was introduced. Freshly painted, and really wide, it's a great victory for cycling in the city, right? Right. I'm going to love the freedom and safety it comes with when I bike on it.

But as someone who both cycles and drives on Dupont and Annette (often enough to be quite familiar with the area's traffic issues), I'm not particularly happy about how this was implemented and the effects it has had on congestion. It's gotten really bad for motorists, and seems to have been done without much consideration for Toronto's mighty ruler - the car. 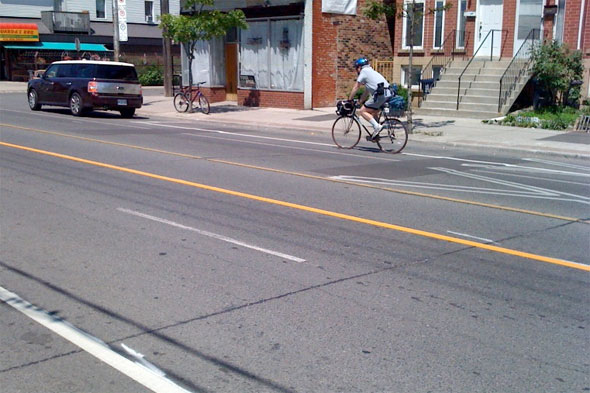 They also didn't do much to cover up or de-emphasize the old road markings, making the road look complicated and not easily understood.

Maybe I need to get used to it. But the benefits I've gained as a cyclist seem to be heavily outweighed by the drawbacks it's caused in my role as motorist. What could have been done differently? I'm not sure. While I didn't go so far as take measurements, I do think it may have been possible to keep the roadway at three lanes, anyhow. Or they could have done away with curbside parking altogether to allow for four lanes and greatly improved flow.