The Shops At Don Mills

"What do you think?" I'm waiting at the bus stop on my way home from a few hours wandering around the heavily-hyped but half open Shops At Don Mills when a friendly pensioner in a stylish cap guesses that I'm not from around here. Cadillac Fairview's demolition of the old Don Mills Centre had the neighbourhood in an uproar three years ago, and the bad blood still hasn't gone away, even after the debut of its replacement over two weeks ago.

"I don't like it," says the very friendly pensioner, who says that she lives down by the Science Centre, and used to come here all the time to meet friends. "I hope that Cadillac Fairview loses their shirt." The bus arrives, and just before we get on, my new friend tells me that I really should go see The Sound Of Music. "It's a really great show."

Opposition to the new shopping mall had two faces. The most vocal came from locals, many of them seniors, who were fond of the faded Don Mills Centre, and used it as a meeting place, but there was a smaller one that decried the demolition of a historic example of post-war suburban commercial architecture, even though the open air strip mall that E.P. Taylor opened in 1955 was roofed over in 1978, and it's the indoor mall that the seniors wanted to retain, for reasons that will probably be more obvious in mid-February than in the first balmy days of spring.

You'd think that the latter group will be thrilled with how C-F has paid tribute to a landmark '50s shopping mall with ... a retro '50s-styled shopping mall. Certainly, the new mall has gone out of the way to blend in with the neighbourhood, and architect Harry Pellow's streets of shops do a more than credible job echoing the fine space age modern public library on the other side of Lawrence East, and the low-rise apartment buildings lining Don Mills Road. 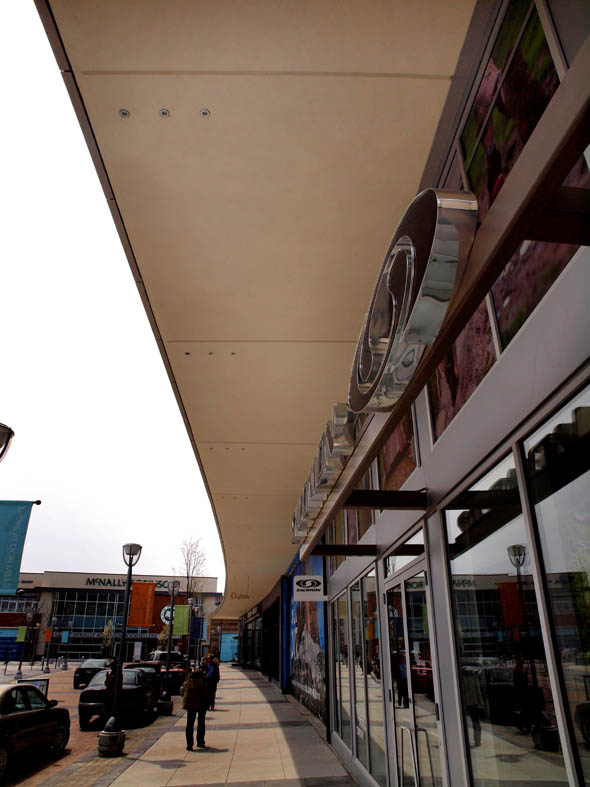 Response from the connoisseurs of urbanism has been mixed, though, with Spacing magazine calling the new mall "well-intentioned" but "vaguely Disneyish." Pellow and C-F even saved a pair of graphic sculpture murals from the old mall, placing one on Lawrence next to where Mark McEwan's gourmet supermarket opens next month, and another in a breezeway near the entrance to their offices, and the streets of the new mall have been named after Don Mills notables such as the late Marie Labbatte, an area councillor, and Karl Fraser, the first CEO of the developer that built the original mall. 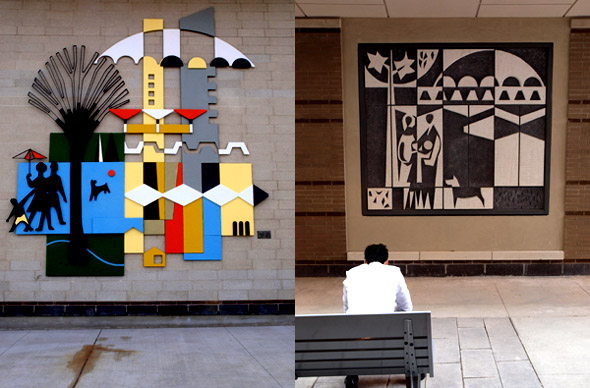 It's probably a bit early to judge the Shops At Don Mills yet - only half of the stores are tenanted, though C-F expects to be up to nearly 90 percent by the fall. My pensioner friend complained about the lack of a food court - restaurants are roughly centred around the central park, which will make for pleasant al fresco dining for a third of the year at best - and a hardware store or gadget shop for the guys. There is a preponderance of shopping for the ladies, and the Anthropologie outlet, much anticipated in the months before the opening, was doing fine business on a weekday afternoon. 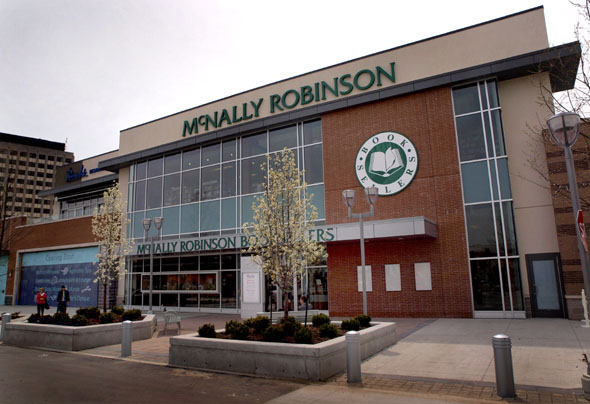 The biggest hit for locals seems to be the McNally Robinson store, a two-story spearhead from the western bookseller into the heart of our Chapters-Indigo monopoly, which has been designed in what I can't help but call Post-War School Board. Prominently displayed in the store's windows are autographed copies of Lorne Miller's 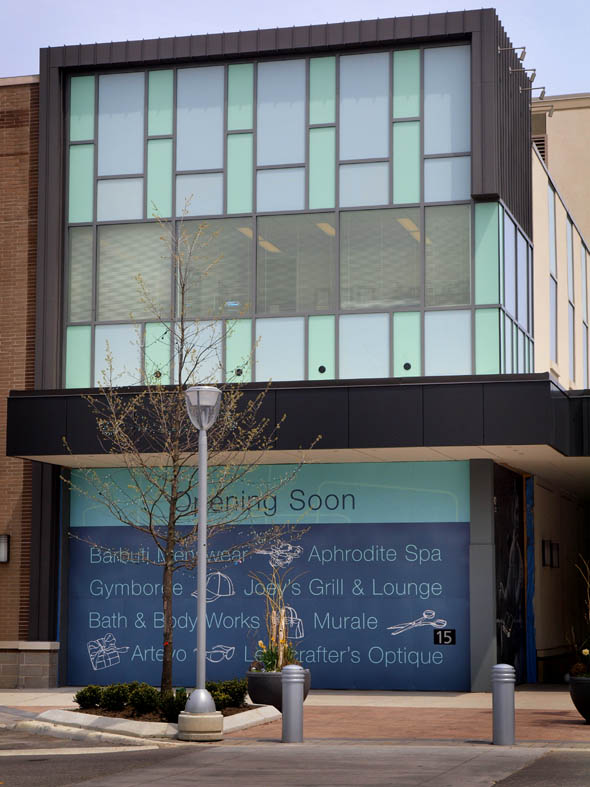 Our Don Mills: A Community Memoir 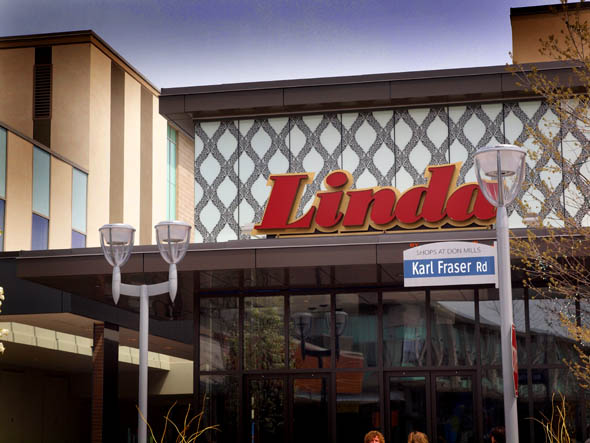 , which devotes many pages and several photos to the old mall, whose resemblance to the new complex is, in spots, eerie. 1955 was a long time ago, as my pensioner friend could probably tell you, and while there was no shortage of gray hair strolling under Douglas Coupland's clock tower by the mall's tidy little park and fountain, the Shops At Don Mills probably isn't relying on them for its future, even though it uncannily resembles their past. 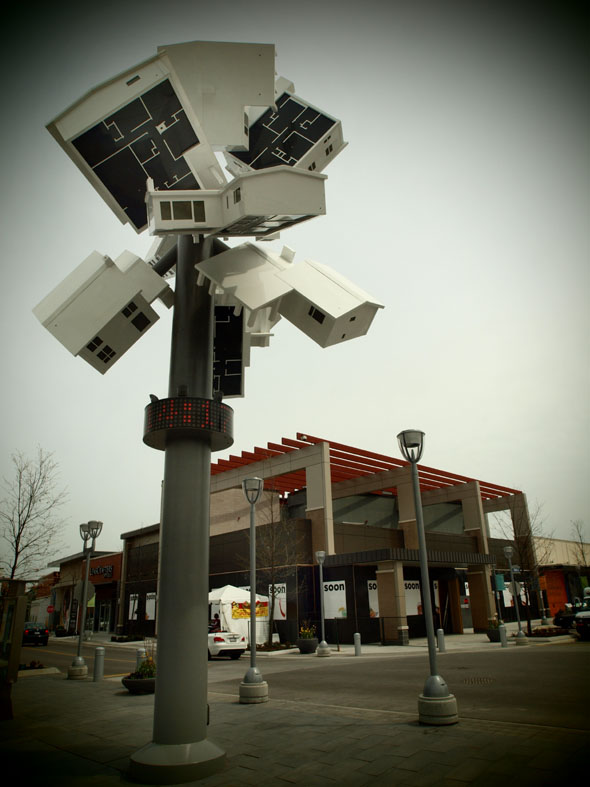