Just around the corner from the cafĂŠ Cool Hand of a Girl, Nancy is spending the weekend on her garden. The small plot outside her typical Junction row house now sports a tiny lilac tree, with one small bloom. She stares at it hopefully.

"There were tons of hostas, but they were getting burnt by the sun." The green hostas now sit in pots, waiting for relocation to the backyard. This is Nancy's first spring in Toronto. "I have to do the yard but everything else was done. I painted a little." Inside, I see she's actually painted a lot: the walls pop with colour - especially upstairs, where her children each chose bright paint chips for their bedrooms. 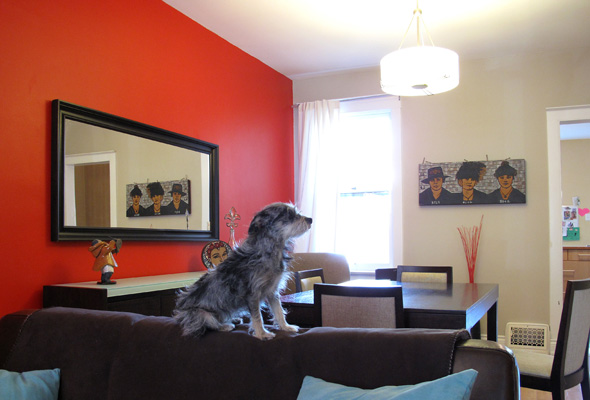 Nancy bought the house in May, 2008 and relocated from Calgary this past summer. The house is a basic small "four-square", i.e. an Edwardian house with plain boxy lines, but it's incorporated into a row of identical houses. All have bay windows in the upstairs master bedroom, which makes the houses look more welcoming than some Toronto four-squares.

Nancy feels she had good luck with the building: "It was a low listing. They were hoping for a bigger bidding war than they got, because there was just one couple and me, and the couple dropped out immediately." She has no regrets about buying. "I wanted to be in the West [to be near the University of Guelph Humber] but I didn't want to be way out there," she says. "The real estate agent and I looked at these houses in Etobicoke, which were in my price range. Then we got to the Junction." She knew immediately she'd found the part of the city she wanted to live in. 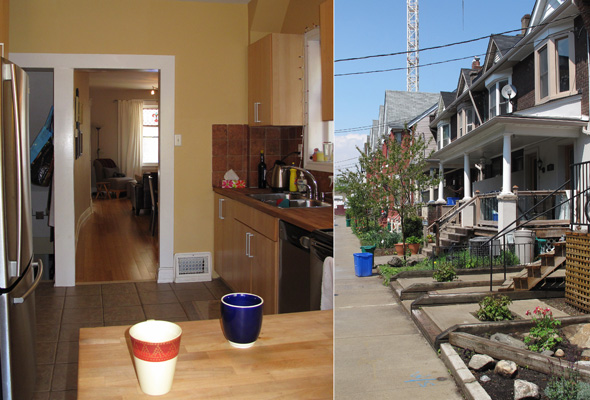 She moved with furniture and art she's been collecting for years. "I would have had to bring the kids' toys and books anyway," she says, "And then to replace all the furniture - you might as well just ship it." The living room has an early painting by video artist Jim Geortz. On the far side of the room, there's an intriguing mugshot panel by Lisa Brawn. Esme the dog eyes me dubiously, while the resident cat sleeps on a nearby chair. Nancy tells me Ali is vicious, but he earns his keep: "The cat killed the mice when we moved in; we haven't had any trouble since."

Moving in, she discovered the house doesn't really have any closets. "Just the one cupboard in my bedroom," she says, and leans against the open armoire she's installed near the back door. It comes from the nearby recycled furniture shop, Forever Interiors. Built from old scraped-down doors, old doorknob holes and hinge marks are still visible. "It's got a lot of character, like an heirloom piece. It holds all the school knapsacks, the yoga bag, bike helmets, shoes..."

She gets wistful when she talks about the grey Toronto winter. "I came from a really sunny new house in Calgary, which is a sunny city, to a row house, in Toronto. Moving to a row house, I lost two whole sides of windows." I suddenly understand why she wanted to paint the living wall a fiery red. Fortunately, the house backs onto a small sunny backyard, and trees stretch down the alley. "Getting outside is imperative!" says Nancy. 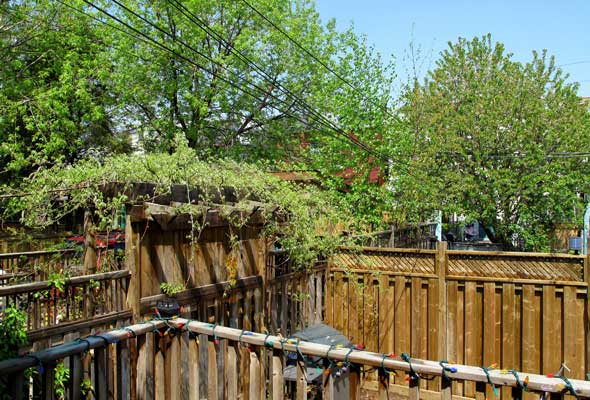 The Junction once boasted foundries and mills, Canadian Pacific railway yards, and even the Heinzman piano factory. Its working-class row houses stood on the edge of the city's stockyards and meat-packing district (leading to some pretty putrid waste issues in the neighbourhood). Gentrification didn't gain a toehold in the area until the Junction's temperance laws were entirely removed in 1997, and since then things have been slow to take off. A few hipster outposts rub elbows with empty storefronts, long-suffering local businesses, and the occasional single room residence; so far, there aren't a surfeit of yummy mummy apparel shops. Which is just fine by Nancy. 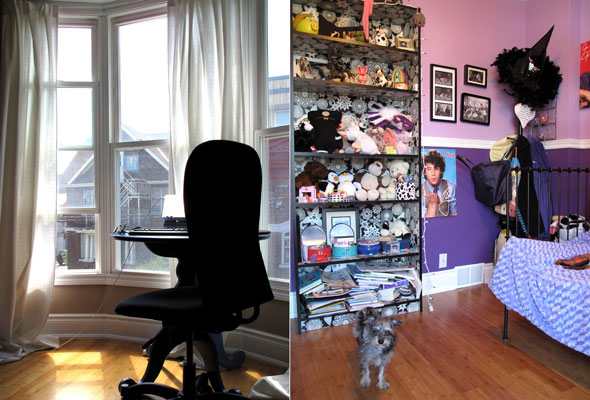 I ask her if she's planning to stay long-term in Toronto. "It's a perfect neighbourhood for us. I really think we'll stay, but who knows... My neighbour on this street grew up in this neighbourhood, and her mother grew up here. She's lived her entire life here."

6 home questions:
What do you love most about your home? "I like the character. When you're in a brand-new suburban house, everything works. And everything is a bit off, here. But it has a character."

What drives you crazy? "I don't like to turn on lights in the day, but here I have to."

What's your favourite place in your home? The writing niche in the bedroom's bay window. "And the kitchen. On the weekends, I sit at the counter and have tea and read the paper and the sun comes streaming in."

What do you like best about the neighbourhood? "It's a good place for Claire and Luke to come of age. It's diverse, it's a big city... And I love that we're seven blocks from High Park!"

What's most surprising about this home? The stained glass window in the living room: "I didn't know I had the fleur de lis there until after I moved in."

If your home were a kind of fruit, what would it be? "An apple: it's practical and charming."