I notice Linda Smith wipe her tears with her hand at the unveiling of a mural her 12 year-old daughter helped paint in the new community space in Don Mount Court.

"It's beautiful," says the long-time resident of Don Mount, whose own mother was one of the original tenants of the public housing project built in 1968.

Don Mount, now renamed Rivertowne, recently underwent an urban makeover or, more aptly, reconstructive surgery. It's the first public housing development in Toronto razed and rebuilt as a mixed-income community, preceding the more publicized Regent Park and Lawrence Heights revitalizations. Though construction is still underway, Smith, along with other public housing residents, moved back to the Riverdale neighbourhood a year ago. 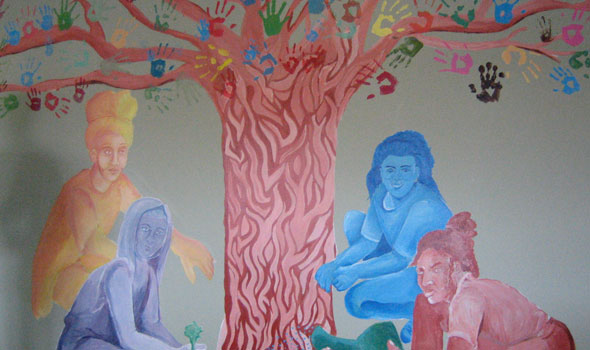 The mural is the first community-building venture in the new Don Mount. It is sparse and centers a tree with four people of diverse backgrounds watering it. The leaves are a colourful collage of the hand prints of community youth. It's more the process of creating it and its message that's important. "Everyone has the right to food, education, housing, clothing and well-being" is handwritten at the bottom.

"I hope the message inspires the community. Sometimes people feel there are no other possibilities," says Suritah Wignall, who also grew-up in community housing. WIgnall is the mural visionary and coordinator of Strokes for Change. The program, run out of the nearby Ralph Thornton Community Centre, brought neighbourhood youth together to create the mural.

"We've built [most of] the bricks and mortar, now we have to work on building community," says Laura Notton at the mural unveiling. Notton is a health promoter at the Toronto Community Housing Corporation, the public body that manages social housing.

Redesigning public housing complexes into mixed-income communities is the latest urban planning fad. It replaces the Utopian 1950s vision of expansive greenery and insular building that bred the segregation and ghettoization of public housing. 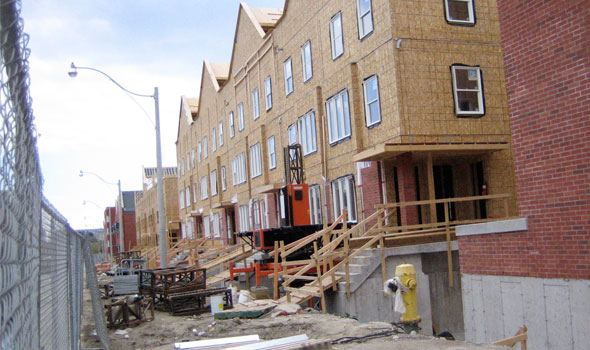 To integrate Don Mount, 187 market-value Victorian, red-brick townhouses are being built. Ninety-nine per cent of them are already sold. Most of the 232 rent-geared-to-income units are constructed, built as stacked townhouses and a low-rise apartment building. The new Don Mount will also be open to the street grid for the first time since it was erected. TCHC says the construction, including a new park, will be done by 2010. 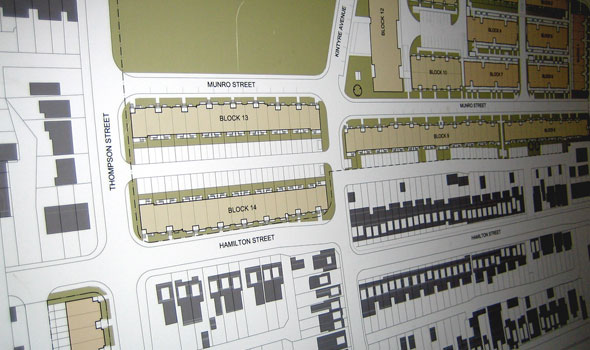 Though better than these 1950s architectural disasters, the mixed-income model, touted as solving everything from stigma to crime that plague public housing, has its detractors. Many residents worry about gentrification and that they'll eventually be priced out of the neighbourhood.

Smith, who was relocated to a house in Scarborough for seven years, is moving back to the suburb. It's not because she worries "the rich people are coming", but because she says "It's not a project."

In Scarborough, Smith lived in a house on what she describes as a nice residential street, "where people owned their own property." She initially moved back to Don Mount with her three kids because of nostalgia. "I organized the Christmas party here for 18 years...This is where I grew-up. I missed everyone," she says.

An article by Royson James, columnist for the Toronto Star, asks why it's always the poor who have to temporarily move to achieve a social mix. Why aren't we also concerned with the income sameness of rich hoods, like Forest Hill and Rosedale? Maybe revamping these areas as mixed-income will curb the white-collar crime run rampant among the pressed Armani suits.