If you had to choose between street parking that delays transit or a parking lot, which would you pick?

This is essentially what Toronto city council will decide later this month when voting on the fate of Dundas West's rush hour parking.

The pilot project (approved in the fall of 2007) allows for streetside rush hour parking in a section of Dundas' Little Portugal, between Dovercourt Road and Sterling Road. A TTC report recommends removing the pilot due to one-minute delays along the 505 Dundas streetcar route.

As a biker (the pedal kind), that strip of Dundas does feel like a mini highway. I never thought I'd say this about parked cars, but they're the better of two evils. I'd rather share a lane with a stationary car than a speeding one that leaves me no choice but to ride as close to the sidewalk as possible. With parked cars, I just have to ensure a door doesn't clip me.

Councillor Adam Giambrone (Ward 18) initially voted to implement the rush hour pilot in 2007 as a short-term solution for this section of his ward. I covered this issue in November 2008 when the pilot was up for its one-year review at the Toronto and East York community council. At the meeting, Giambrone voted to rescind the Dundas strip's existing rush hour parking privileges by October 2009.

He told community council that voting for permanent rush hour parking would be hypocritical after council adopted the Sustainable Transportation Initiative that encourages alternative transportation.

Community members felt he acted as TTC chair and not their ward councillor.

What makes this issue confusing is that after community council voted to rescind Ward 18's strip of rush hour parking in November, they voted to allow rush hour parking directly east of the Dundas West BIA two months later in Ward 17.

Also, how does a parking lot improve a neighbourhood or the city's goals of endorsing alternative modes of transportation? 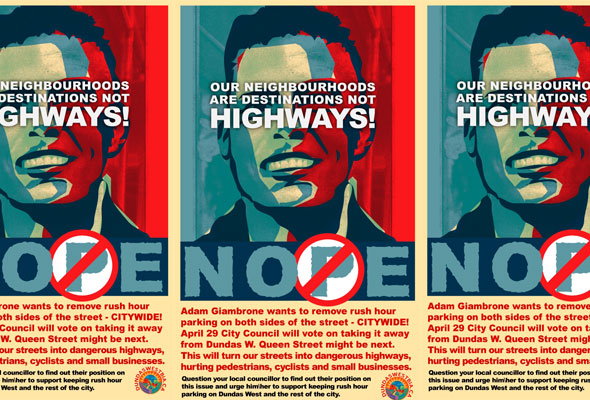 The BIA's campaign is getting attention with their Obama-like campaign posters created by artist and Lula Lounge co-owner, Jose Ortega. On poles and storefronts along Dundas West, the posters depict Giambrone, with the altered message of Nope rather than Hope.

Giambrone's office called the group to voice their displeasure with the posters, calling them a personal attack, says Draper-Fernandez over the phone.

"We've carried a clean fight on this issue, but we're taking a stronger approach. We don't feel our councillor is listening to his constituents," she says.

Photo by Photosapience. Poster graphic is from the Dundas West BIA website.