"The Heidelberg? That's old news! We've got way better tech then that now. Follow me!"

To many, that sentence means very little. But to me, and to other people employed or trained in the graphic arts profession, it's downright pornographic.

I'm sitting in the boardroom of a Toronto print shop called Digital Propaganda, found near the corner of Bathurst and Niagara. It's not my first time sitting at this table, but the last time was more then half a decade ago, and it was under very different circumstances.

Back then, I was in my infancy as a Torontonian, and was employed as a Club Promoter. A fancy word for what is essentially a glamorized nocturnal flyer monkey. You get guest list for events. VIP treatment at clubs. (nearly unlimited line bypass at all the major ones in the downtown core at my peak) You get free drinks and other perks wherever you go. And it's an absolutely unmatched ice breaker to be able to walk around with free passes to a hot club in your pocket all the time. But at the ground level, you were still literally just a flyer dispenser with a smile. 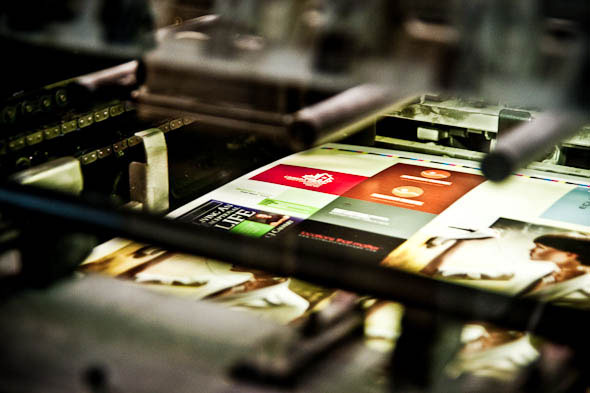 I myself had been fortunate enough to rise up the ranks of the nightclub I worked for, and was charged with picking up the flyers from the print shop, and disseminating them to the other monkeys. Last time I sat at this table I was approving proofs of a flyer for a Valentines party called Bittersweet. This was the last bittersweet if I remember correctly. The art wasn't as hot for this one as I'd seen in previous years. But was still sick!

Rave and Club flyers, as I've since learned through my design education, exist in a kind of design bubble. They are simultaneously ahead, and behind the times. Clinging to old pieces of street culture nostalgia, while at the same time, pushing the envelope of visual innovation. They aren't bound by the rules of every day corporate graphic design, and this works for, and against them in many ways. Before my design education, they were the pinnacle of promotional arts. Nothing was a cool as a well designed Rave flyer.

My romantic obsession with the Rave flyer doesn't end at the sense of sight. Beyond the designs themselves, and on a more carnal level, my nostrils flare, and my child revels in the chance to bask in such high concentrations of offset printing press toner! Very few things in this world tickle my olfactory receptors quite like the odor of fresh, hot, offset printing inks, on warm cut paper! It's akin to Grandmas baking, or Moms perfume, or Dad's Old Spice.

The smell triggers carnal, animalistic pleasure responses in me. Dare I say a childlike sense of euphoria? I used to get so jazzed when I'd crack open a fresh box of flyers. Knowing I was about to get smacked in the face by that comforting waft. I'd stick my honkin' beak in the boxes and take huge hauls like a pixie sticks addict with a fist full of his favorite flavor. It's a comforting scent that permeates the very walls of this place. 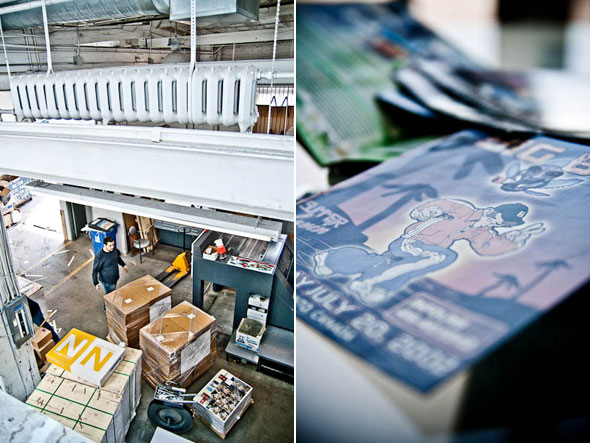 The walls themselves aren't all that special to be honest. The place looks like it was designed to be seen as a pretty hip and put-together spot at one time. Neat lighting and hip trendy modern furniture dot the office scape. The kinds of things that would have won me over when I was a club kid. It's a hodgepodge of styles, materials, surfaces, and textures. Classic exposed wooden and steel beams, electrical wiring and brickwork supporting contemporary architectural accents throughout. Overall it's well put together. But this presentation has fallen by the wayside over the years since I was last here. And that's just fine.

What gives this space it's unique charm for me now is not what the interior designers originally intended to present. It's what has naturally and organically grown over this design in the time this shop has been producing and outputting printed material. Every corner of this place was covered in designer drool fodder. Intricate Die cuts. Multi surface prints. Flexible prints. Prints on transparent and synthetic substrates. They've even got a machine that will print on a full sized door! That piece of "new tech" I quoted someone telling me about in the opening line? There's nothing even CLOSE to that level of sophistication and output back in Prince Edward Island where I'm from.

Again, this might all sound like wish wash and flim flam from some riff raff ruffian. But my enthusiasm for this is very personal. The smell of the inks did more to wake me up when I walked into this place this morning then my morning caffeine fix. It brought me right back to 6-7 years ago. Standing in the storage/furnace room downstairs at what was once called Turbo (uh oh, I'm dating myself here) and filling boxes of Rave and Club flyers to send out to the street team. 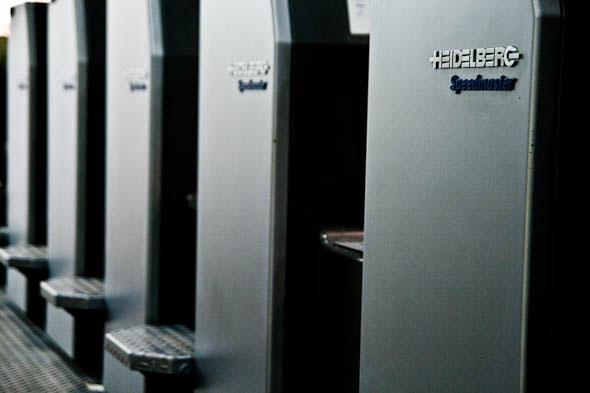 I'd load up boxes with different amounts depending on their destination (Guvernment always got the biggest boxes, as it was the busiest and longest shift. Back then it was one of many clubs we promoted at on any given night!) and then rip around downtown to the various venues on my scooter delivering the goods.

I lived for years with boxes of flyers all around me. While I was impressed with the cool urban decor the last time I was here, this time my focus was different. Now instead of being romanced by the hip and trendy downtempo electronica that's softly spicing the atmosphere in the office, I'm being drawn to the whir and hum of the printing presses in the next room! I'm crapping my freshly pressed pantaloons at the output speed of their new "print on anything" machine. (Yes, it will print on Diamond Plate!)

Understand that when I came to Toronto, my only immediate goal was to become an Electric Circus dancer. (Which I was very successful at for a time. Another post, for another, braver day.) I barely had aspirations of being a "visual artist" but hadn't formulated a plan beyond that. In my youthful ignorance, I believed my drawing skills would carry me far enough, and that I didn't need any computer skills whatsoever. 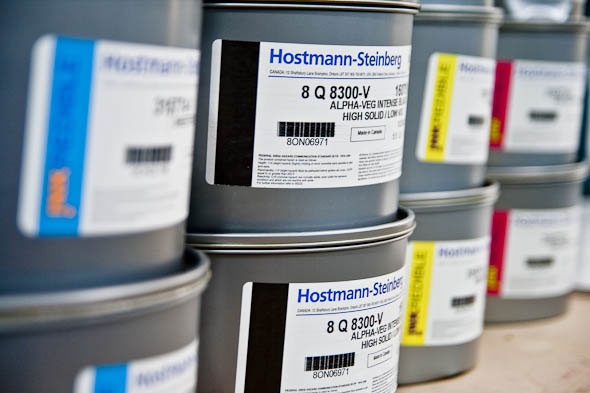 So, like I touched on before, I used to be quite the hot ticket flyer monkey in this town. I was surrounded by what I felt were amazing pieces of graphic design. (the first flyer I handed out was a WEMF 2000 flyer. SICK!) I handed those flyers out like each one was a piece of art. In the beginning I didn't even know anything about the DJs. I just loved the graphics.

Eventually I got to a point where handing out flyers wasn't enough and my obsession with the artwork, and the texture and weight of the paper, and the smell (have I mentioned I love the smell?) became too much to ignore. I was so curious about the artistic and creative design portion of the process that I started to yearn to be a part of it. In my youthful excitement, I somehow still believed that I was going to be able to pursue a career in the arts without an education. Riiiiight.

That quickly evaporated into a pipe dream as gig after gig passed me by for lack of computer finishing skills. I got asked to design lots of flyers. Promoter friends loved my illustrations. But without being able to take the pencil sketches to the next level, I was a bit of a lost cause. Getting to go into DP for proofs was as close as I got for a time. And I relished the experience. 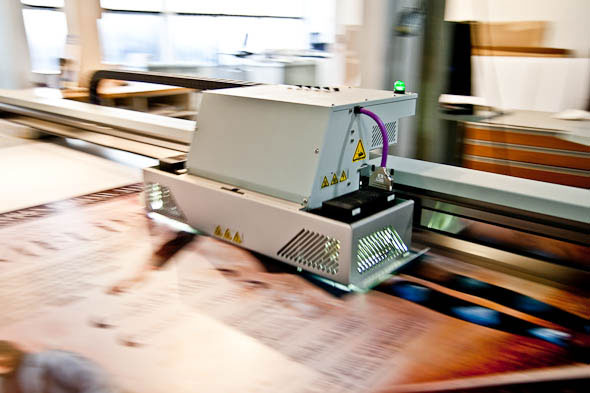 The clubs were a lot of fun, and I would never trade my time monkeying around for anything. But we were broke. 100 dollars cash sounds like an amazing paycheck just for showing up at a place with a guestlist of people. But the problem with being paid at a club, is that you spend it all before you ever get out. So when I was given a chance to move back to PEI and take a course in graphic design, I jumped at it.

Now here I sit, with everything having come full circle, seeing the same print shop, but from the polar opposite vantage point.

Instead of walking through the warehouse and stopping with glee when I see a cool graphic for an upcoming event, I'm skulking around the production room with my face glued to the sides of the Heidelberg. Watching as the rollers apply the images, one colour at a time. It's magical! They are still printing event flyers here. I see a couple boxes of them as I'm snooping around. But it seems even Digital Propaganda, the Gorilla Marketing Gurus, have seen a gentrification of their clientele. A quick glance around the office yields far more product point of sale displays, movie posters, and "legitimate" promotional materials from large corporate clients.

A glimmer of hope for my inner club culture artist though, as I've been hired to do a few flyers for some smaller local club nights since I've arrived. I've managed to combine my trusted and true old school hand drawn illustrative style with the new age computer finishing techniques. I'm also getting lots of "corporate gigs". And sure, we need those to pay rent, and maintain a vehicle, and buy groceries, and pay our taxes, and tuition, and for some of us, buy diapers! But the artistic merit of those old Rave and Club flyers lives on.

Few other design gigs compare to a club night flyer for artistic liberty and freedom. So what's next? Clinging to the past and reliving old glories through flyer design? Sure... But there's also this "new tech" that my buddy at the downtown big city print shop was raving about. This fancy new kind of printer that doesn't use plates, and doesn't separate colours and apply them in layers... It can print anything, on almost any surface, in full colour, and in no time! (doesn't smell as nice, but maybe it'll grow on me) This new machine sounds like a chance to do something innovative.

Combining old staples with new techniques?
Remixing the past to build the future?
Standing on the shoulders of your predecessors to reach new heights?

And to a lesser extend, surrounding the Gardiner with a bunch of shiny new high rise condos?

10 years since I first moved to Toronto, and a lot of things have changed... But it's still just as exciting. 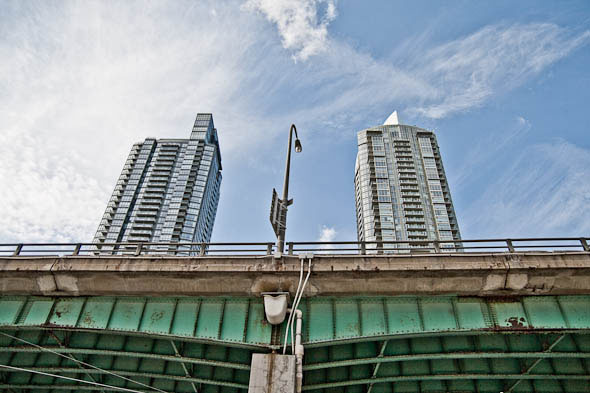 Writing and photos by PJ Stephen