When the economy flatlines and businesses enter the dead zone, once-grand streets like Palmerston Boulevard can show off their ability to learn and adjust. Boom or bust, the Boulevard with its snazzy globe streetlamps and wide lots has seen it all before.

The first houses were built in 1903, aimed at wealthy WASP types -- former mayors Horatio Hocken and Samuel McBride moved here, and the most impressive house belonged to George Weston, whose bread factory wasn't far away. By the 1920s, the community had shifted, and the residents of the grand brick family homes were mostly Jewish; some houses still have traces of a mezuzah in the doorway. In the early sixties, despite the wide street and luxurious trees, the street was on a downward slide; to attract tenants, landlords converted the grand homes to boarding houses.

Today, many of the houses are apartments, with quirky illogical layouts and over-the-top woodwork. "Everything is idiosyncratic in a house like this," says Ann of her ground floor Palmerston apartment. "Which makes it fun. And strange." 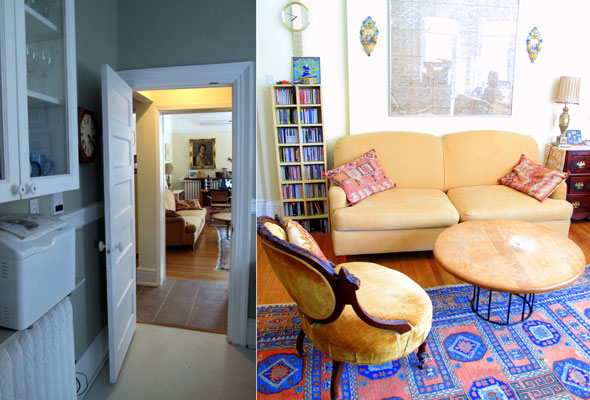 What: 1-bedroom apartment
Who: Ann
How much: rent is $1410, plus utilities
Layout: entry, living room, kitchen, bathroom, bedroom (formerly the dining room of the house)

"I moved here because I knew the woman who lived upstairs, and I wanted to live somewhere central." When Ann moved in five years ago, the house's former living room, dining room and kitchen were available as an apartment; both the living and dining rooms had big double doors leading onto the main foyer of the house. "It wasn't very private," says Ann, who moved in anyhow, using the converted dining room as her bedroom.

Fortunately, soon after she moved in, the landlord changed the grand entrance area and main staircase, giving her ground floor apartment a little entry hall. The double doors are now blocked, and the space that used to lead into the dining room has turned into the perfect space for Ann's small upright piano. "I don't play that often," she admits, but the piano makes an ideal landing pad for keys, papers, books...the things that tend to accumulate by the front door. 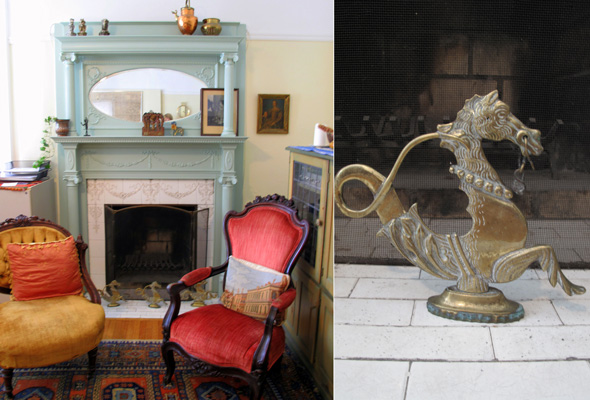 There's also a small closet with a stained-glass window; for extra storage, she has what used to be the stairs to the basement--some of the perks of living in subdivided grandeur.

"When I moved in, the fireplace was purple. I couldn't decide what colour to repaint it, so I picked out a [turquoise] colour in the rug, which came out really bright. I lived with it for a while, then I was in France and the shutters and doors there are this lovely colour... so I repainted it."

The living room is filled with personal history: the chairs belonged to Ann's parents. "I call them the male and female chairs," she says. The room is a good example of how the structure of a space can create the perfect frame for our own belongings. Along the edge of the non-working fireplace are the Venetian gondola horses collected by Ann's grandfather. They look as if they've always been there.

But the living room also accommodates Ann's office. "I do and don't like this set up," she says. The filing cabinets, printer, and two work desks annoy her with their clutter. "But I like working at home, and I need a window. I like watching the rhythm of the street through the day. There's a pair of cardinals that come every year to nest in the tree outside." 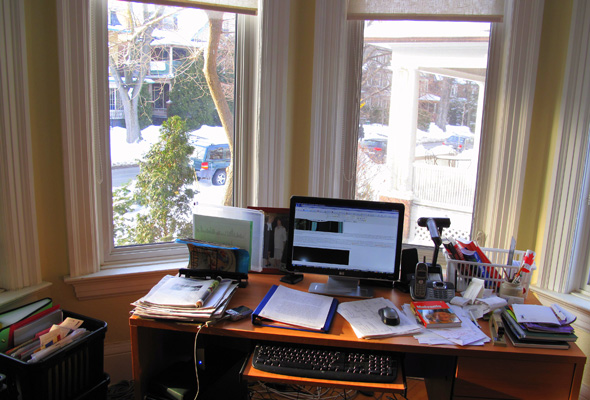 One of the advantages of an apartment in an old house is the enormous kitchen, and the wonderful wooden mantle in what used to be the dining room, which is now Ann's bedroom. The strange generous shape of the room allows for lots of bookcases (a good thing, considering the overflowing shelves of books in Ann's apartment).

But outside the walls of her home, Ann says the up-and-down history of the street has had an impact on the atmosphere of the boulevard. "The neighbourhood is surprising," says Ann. "The street is kind of transitory. It's not a big deal to me, but I've lived on friendlier streets. Maybe it's that the boulevard is wider than the other streets around here, the trees are bigger, houses further back. People don't get to know each another the way I expected."

What do you love most about your home?
I like the front porch; I'd much rather have the front than a back deck. I like that transitional space, to participate in the street.

What drives you crazy?
Nothing really. I could use more storage space. I need a more comfortable place to read, inside.

What's your favourite place in your home?
My hammock chair out on the front porch. Not at this time of year, though.

What do you like best about the neighbourhood?
Having been in the Beaches, I loved the water. But there were only two directions to walk in. Here I can walk in every different direction: I like the Market, Queen Street West, the University, Koreatown...

What's most surprising about this home?
There are always surprises!

If your home were a kind of fruit, what would it be?
A peach.