"Catherine Runchey, rooming house operator extraordinaire," says Trish fondly, looking at the plaque on her house. "We don't know much about her, except that she lived here." Along with other of the Robert Brown row houses near the revamped AGO, the house is on its way to being listed as a Heritage building.

The house dates from the transitional period between the Grange's aristocratic heyday in the mid-1800s and its population shift in the 1890s, when the area became home to new Canadians making the transition to a new life in Toronto. Mrs. Runchey's house reminds me of English author Jerome K. Jerome, who once wrote: "I want a house that has got over all its troubles. I don't want to spend the rest of my life bringing up a young and inexperienced house." 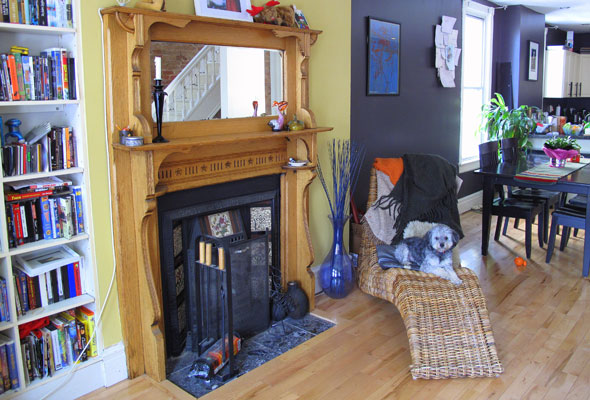 Who: Trish, Zak (10 years old) and Hubble the dog
How much: $500,000.
Layout: living/kitchen and office on second floor, three bedrooms on third floor, and 2 bathrooms (the first floor & the basement are two separate rental units)

"I love the age of the house, because of the history and the character--you can almost feel every generation who has lived here," says Trish, inviting me upstairs to the open kitchen/living room. Some people claim to have literally felt the presence of ghosts in the house--Trish hasn't seen any. As far as I can tell, the only non-human presence is the enthusiastic Hubble, who becomes a pale grey blur in most photographs.

I don't expect to see Catherine Runchey drifting down from upstairs in a white Victorian nightdress. But looking around Trish's house, Mrs. Runchey might feel comfortable, recognizing the delicate wooden mantlepiece in what's now the living room and nodding at the familiar geometric patterns on her stained glass windows.

The stripped-down brick walls enhance the been-there, seen-that feeling of the house's age and experience. Occasionally the bones of the house feel constricting, admits Trish: "Sometimes I also hate the age of the house, because the age limits your design choices." Without Mrs. Runchey's Victorian taste lingering in the old wooden moldings, the decor might be much more contemporary. 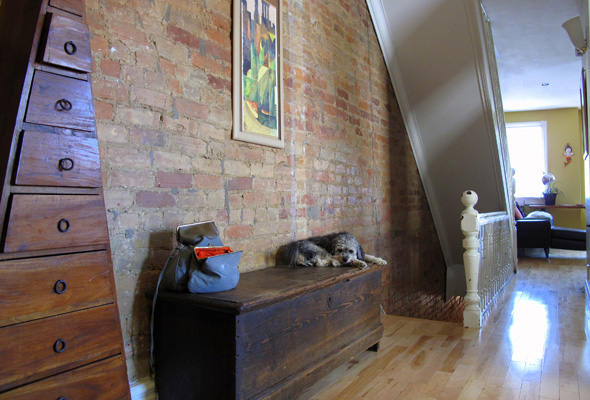 Trish knew when she bought the house that 4000 square feet was much too big for two people, but it took a bit of time and planning to subdivide the space. "It was all one house when we moved in. Zak and I felt like we were two minnows in an ocean," Trish laughs. The house had some style problems--including cocaine-pad shag rugs, which Trish immediately tore out (Mrs. Runchey must have breathed a sigh of relief.)

"I decided to rent out the basement first, there was already basically a granny flat there. Then I severed off the ground floor." Despite the subdivision, the house has kept its original entrance and stairway. "I wanted to keep the integrity of the house, preserve its historic features." 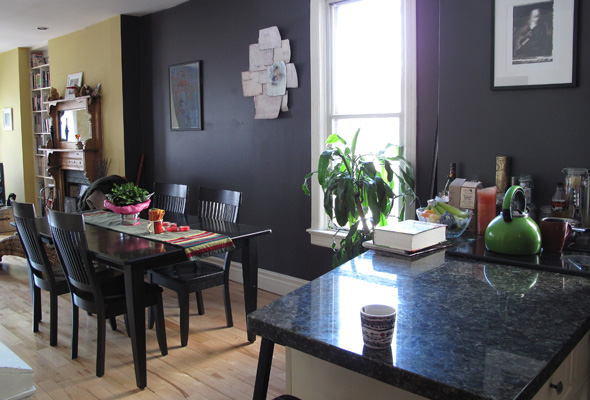 She carved out an open kitchen/living room on what had been the second floor of the house. "Downstairs, the original glass doors are impressive, there's stained glass typical of that era of Toronto and extra-high ceilings."

But the loss of the ground floor has more than paid off, especially at this moment of economic downslide. "Being a freelancer, having the rental income is great." Initially, Trish looked at homes further west, but the skinnier row houses she could afford made her feel squished. "This one had sat on the market for a year, so I was able to pay nearly $100,000 less than they had originally listed."

She suspects the house's potentially noisy location put buyers off. But she loves being part of the Grange community. "It's a patchwork quilt," she says. "The house is always going to need a ton of work. But I'm in the centre of the art world--the media world of Queen Street, and the AGO, and OCAD. It was fantastic for Nuit Blanche, I could nearly go out in my slippers." I wonder what Mrs. Catherine Runchey would think. 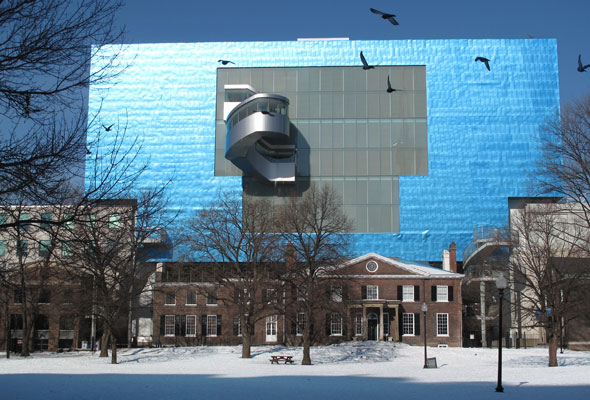 6 home questions:
What do you love most about your home? I love the openness of the space and the light on three sides. It's airy, the opposite of how most row houses feel, how they can be claustrophobic, they make me feel like Maxwell Smart with the walls closing in.

What drives you crazy? The [plain white] kitchen cabinets. I did the kitchen and it drives me nuts! The counters and appliances are okay, it's just the cabinets. What was I thinking?

What's your favourite place in your home? "Saturday mornings, I sit on that sofa for three hours, reading the newspaper and books. But I love my bedroom as well, with its little balcony."

What do you like best about the neighbourhood? "I love the park; there's a real dog walker's community. I love the vibe...and I love the AGO. Construction was a nightmare, it was unsightly forever, but now it makes the park feel bigger."

What's most surprising about this home? "The people who lived here before me did a lot of renovation in the 1980s--so the room that's now my office was a 6-man hot-tub. The couple had three sons and they'd moved here after living in the 'burbs. They missed their backyard pool, so they had the hot tub put in. I did use it a couple of times...but it was a huge waste of space."

If your home were a kind of fruit, what would it be? 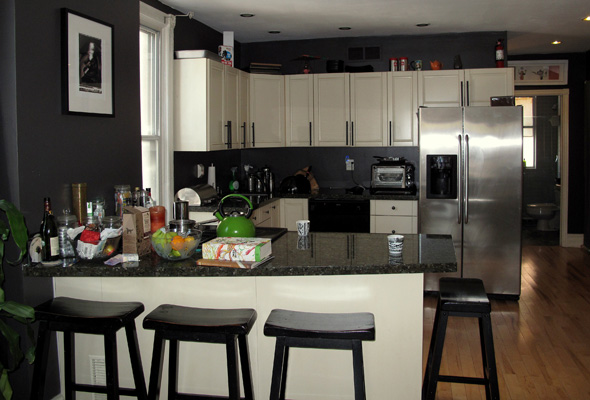 "A pomegranate--lots of textures and flavours."