On the last full weekend in January, in a revitalized building at the corner of College and University, one hundred and forty self-described policy wonks and social innovators gathered for an all-day, web-enabled, face-to-face "unconference". They came from universities and social media consultancies and the Office of the Mayor and the federal NDP, to discuss that strange space where technology and democracy intersect.

If I were a gambling man, I'd say about a million things happened at #ChangeCamp that are worth writing about, and were written about. Organizer and frontman Mark Kuznicki foretold by tweet yesterday that the two weeks of madcap, post-camp activity are winding down. The press is sated, the project teams are in their huddles, notes have been lovingly entered on the changecamp wiki, bushy-tailed organizers in far away Vancouver, Ottawa, Sault Ste. Marie and Maryland are rallying for their own camps. And Mark's interview on CBC Radio One's Spark airs this morning at 11:30 am.

What follows is a sampling of some of the most insightful commentary and forward-thinking projects to come out of the last two weeks of ChangeCamp. Some selections are my own, other excerpts were suggested by participants. There's way more to mention than I have room for. Malcolm Gladwell, author of The Tipping Point, would call this the thinslice of a much larger, much more important movement. 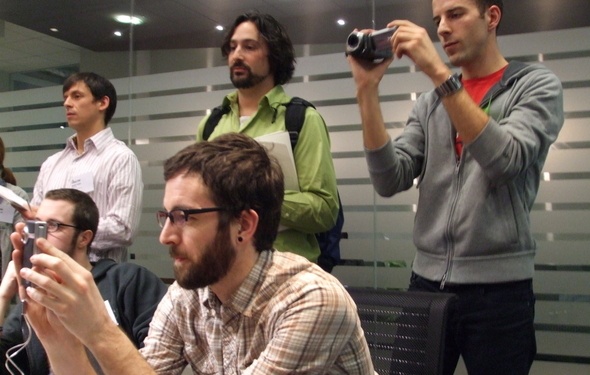 On the conference itself:

In his interview with Spark's Nora Young, Mark said:

"So the challenge here and the opportunity was, let's engage people in a really important conversation, not about left or right, not which ideology, but participation or not."

"Two participants discussing their concern about the tech divide, concern about this group - disproportionately young white guys. I'm an old lady, proud to be here, but agree with these fellows that the room right now is definitely not representative of T.O. I've heard a number of times this morning that this needs to be a focus."

"You look around in the world and you realize, nobody's asking me to actually do anything, I'm just being asked to buy stuff. Or I'm being asked to follow the path that somebody else has spelled out for me. So I think the expectation now of a new generation is, "we want in"... [A]nd the web just changes everything. In how we can organize ourselves, and in how we can find things that we're passionate about, and connect them together."

Sean Howard, who describes himself as a freelance consultant disguised as a dirty hippy, said by liveblog:

"Crowdsourcing is not really new when we consider the fact that much of this stuff exists today. Governments try to engage citizens all the time. Just not with digital tools. Maybe we can start with what is there today and what is new?"

"Chatting with a feminist, who wonders what planet some of these folks are on when they wonder about community organizing. She points out that Obama didn't invent this, he learned from it - the feminist movement, and so many other movements that have achieved successes, been pushed into retreat, and re-succeeded, continued to make progress..."

On the Shame Engine, which Mark described to me as "a community-based geo-tagged social micro-messaging tool designed to help regular citizens make their place a better place," but is better explained in this video.

"The shame engine basically takes the idea of Twitter, you know micro-messaging, 140 characters or there abouts, and connects it to a physical location... So it can be a question, an announcement or a problem. So someone could say "pothole" and put it on a map. "This is a pothole." And other people can add to that. And then you visually start to represent the problems that need fixing in your community . Or, "I'm having an event, a neighbourhood picnic, over in this areas." So the Shame Engine is really this idea that, underneath it's about connecting people with micromessaging. You know, an application that will be built. And it's all designed to get people to respond to real needs and real opportunities in their own community in a local way."

On electoral reform, a topic that has tragically disappeared from Conservative and Liberal talking points

"What about interest-group based politics as opposed to locality-based i.e. what would a system look like not based on ridings?"

"While I think it's great that (say) Conservatives or NDPers or Greens will be able to call governing Liberals to account for misspending or whatever, for me the only real change will come if the "silent majority" actually gets a voice. So I was thrilled when Michael Allan, whose name I recognized as the creator of Votorola, came to the session. Votorola, in addition to being a mechanism to enable online voting, allows me to "delegate" my vote to someone (anyone) whom I trust to know more than I do on the subject and to represent me well. And delegation is "cascaded" so that that person can also delegate to someone else, so I might end up having my vote cast by someone I've never even heard of -- but still trust."

I got the following explanatory fictionalization from Michael Allen:

*** joining channel #albion ... synced in 0.043 secs (need #canuck version)
chri. So which draft of the EU constitution are you voting for, Nick? Or do you have your own draft, like me?
nick You're kidding me, Christabel. I'm voting against the whole thing. Brussels can stuff it.
chri. Are you out of your tree? Brussels is opposed to it. If we don't reach *some* kind of agreement, then we're stuck with whatever the Eurocrats give us. Nick, you're voting for the status quo!
...
chri. Look Nicky, you know me, we see eye-to-eye. Why not vote for me on this one?
nick Sure Chris... if it matters to you.
chri. You see, I've gathered quite a few votes for my draft. It's no big deal, I've only made a few changes here and there. But they listen to me. The drafter I'm voting for (she has a lot of votes) she's using my changes! And so on, down the line. It's kind of fun.

"Enjoyed the extremely lively and CROWDED session on opening Toronto's city data. There were, I'd say, literally over 100 ideas shouted out, some of which I came here to talk about, others of which had never crossed my mind. The mayor's office seems to be putting some energy into opening data up, and they had a very enthusiastic audience here today. I hope we can keep the conversation alive, though, since it's a lot easier to throw out ideas than to implement them."

"Interesting that the calls for transparency into processes and improved efficiencies are not fundamentally different from enterprise concerns (i.e., my day job): how can citizens/consumers get access to data that impacts them, and see how things are happening?"

"Government provides the service but they also have the data. So focused on service, not sharing out data, which leads to feedback, which leads to improved service. How do you find the right balance within budgets when change is required. Cultural, technical, etc."