In the immediate wake of Hamas's agreement to a ceasefire, some 1000 supporters of Israel's operation in Gaza took to Yonge and Dundas square on Sunday afternoon to make their voices heard. There have been numerous rallies sparked by the recent fighting in Gaza, both in support of and against the Israeli operation. Not having had the chance to witness those in person, I headed down to Yonge and Dundas to take in the sights, and speak to some of the rally-goers.

It was a mostly joyous event, with people dancing and cheering throughout the proceedings. In the midst of such jubilation and overt expressions of political belief, I was surprised at how few people were willing to speak to me on the record.

"You just want to write about how blood-thirsty the pro-Israel side is," one man said. "But did you tell about the anti-Semites at pro-Palestinian events?" I assured him that I had no such intentions, and that I was disgusted by some of the rhetoric at recent pro-Palestinian rallies. But, of course, intemperate remarks often result from inflamed passions, and this rally would be no exception.

"They didn't bomb them enough," said another man, lamenting what he deemed Israel's excessive restraint. "Israel won't be safe until they're all destroyed." Who? Hamas or the Gazans? "Is there a difference? They elected them." Isn't that the same rationale often used to excuse suicide-bombings that target Israeli civilians? "No, this is different." 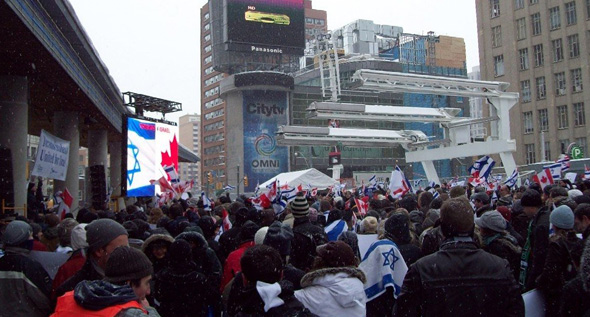 Of course, not everyone was so unreasonable. I asked a woman named Michelle why she was at the event. "It is important for all of us around the world who support Israel to make our voices heard. I wish it didn't have to be this way. Things are not going well, but Israel can't just wait for Hamas to decide they're tired of launching rockets."

I asked if she was hopeful that the incoming American administration might be more successful at reaching a peace settlement. Before she had the chance to answer, an elderly gentleman injected himself into the conversation. "Obama won't help the Jews. The Muslims stick together."

Visibly mortified at hearing this laughable canard repeated by a fellow rally-goer, Michelle struck a very different tone. "Whether it's an Israeli child dying or a Palestinian child, it's horrible. But Israel can't allow rockets to strike within its borders. Hamas is what stands in the way of peace. I don't know if things will change with a new President in the White House, or even with a realignment in the Knesset, but things aren't working the way they are now."

At this point I prepared to leave, hoping to make it home in time for football. Across the street, outside Dundas station, were a handful of Jewish counter-protestors.

"It's important for us to make it clear that not all Jews support the IDF's brutality. Look at them laughing and celebrating. I don't know how they can celebrate when so many people are being killed." Perhaps the levity was in part a response to the ceasefire? "I don't think so."

Given the cosmopolitan nature of Toronto, it's not surprising that outrage over international events often spills out into our streets. We should be thankful that when we do disagree, even heatedly, we can do so peacefully.