Astride the Credit River in Georgetown Ontario just north of the city, sits the ruins of the Barber Paper Mill. Originally established in 1823 by a former United Empire Loyalist, this was my first stop on a journey to some of Ontario's ghost towns with 2 friends several months back.

Among the many accolades of this hauntingly beautiful ruin's history is its pioneering use of hydroelectric power in North America, its being the first to use long-distance power, as well as its many contributions to almost every aspect of Ontario's paper industry. 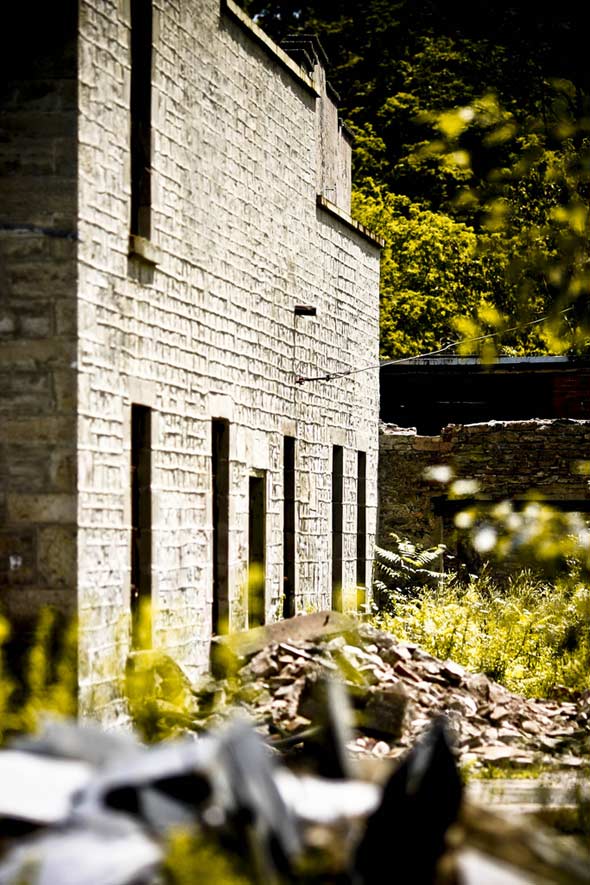 The Barber brothers bought the property as well as the adjacent foundry in 1837, naming the settlement which was quickly growing nearby 'Georgetown' (formerly 'Hungry Hollow'). 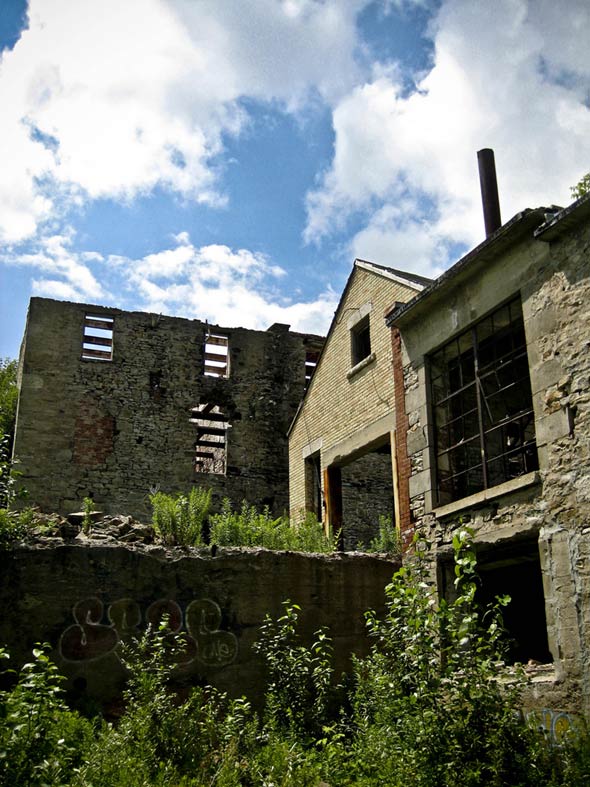 The converted wool mill began to use and produce rag paper, but with the growth of the famous Canadian Grand Trunk Railway, it would switch to wood pulp, employing hundreds of workers on its 5 hectare property (that's almost 12.5 acres!). 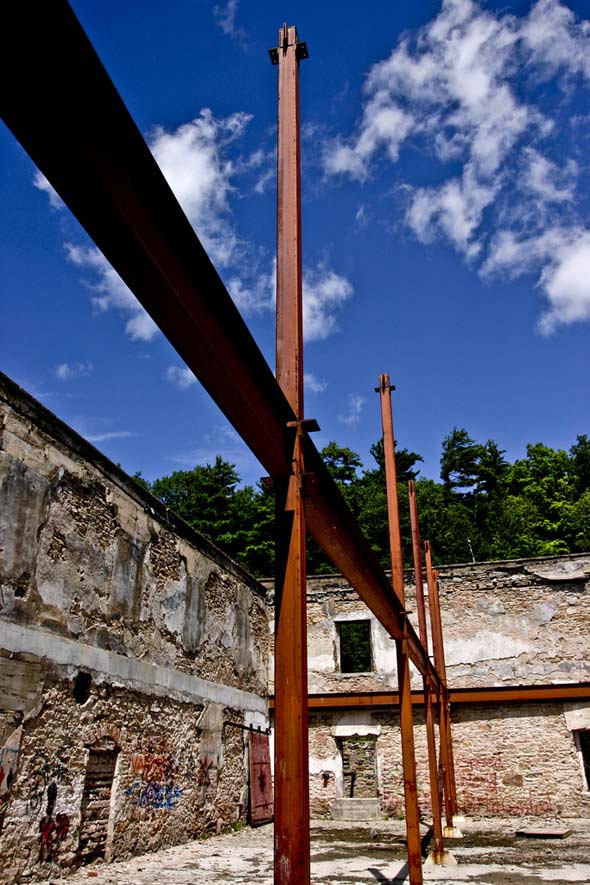 By this point, business was good enough that they were able to commission the construction of a hydro station several kilometres upstream, realizing the power that could further be harnessed from the mighty Credit River.

By the 1860's, the Mill was responsible for a large percentage of wallpaper manufacturing, but upon the retirement of the owners, the entire property was sold to the Provincial Paper Company, leading to an eventual slowing of use and sales. 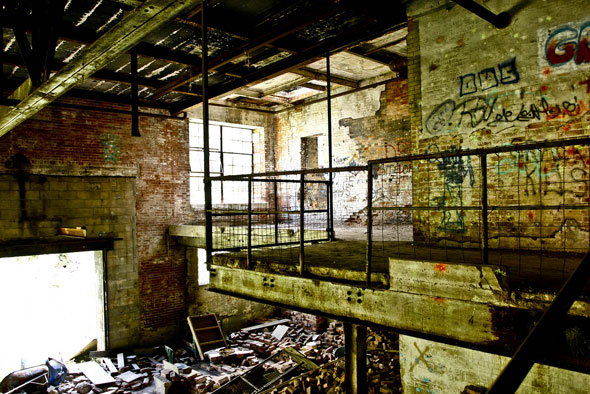 I had heard rumours from friends who had visited this place beforehand that an intricate network of massive steel ropes held much of the structure together, but nothing could have prepared me for seeing it in the flesh, so to speak. Amidst the missing floors and crumbling walls is an impressive series of metal beams, wires, and poles literally holding the place from crumbling in on itself. 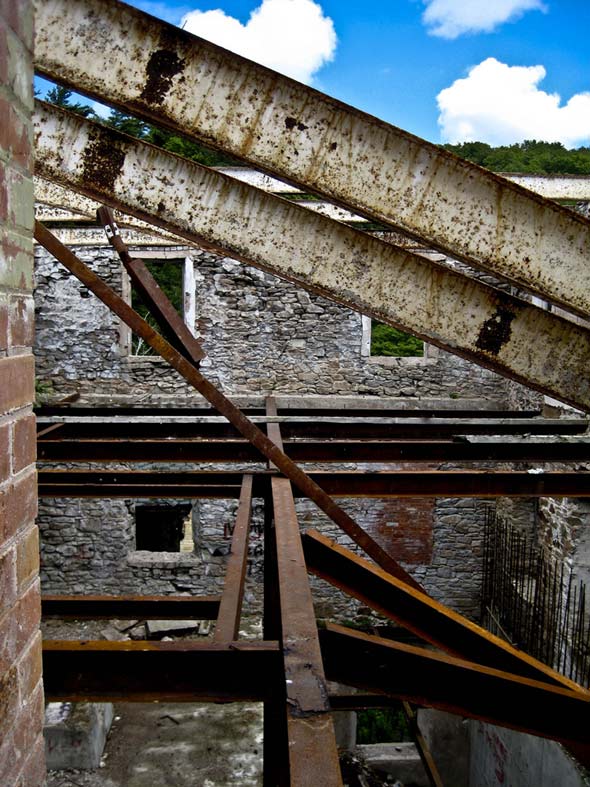 It was not until I did a bit of digging that I realized that the group who are planning the development of the severely dilapidated site, Everlast Restoration, far from being a cold-hearted demolition company, is owned by a man who has a particular passion for the site both aesthetically, and historically. 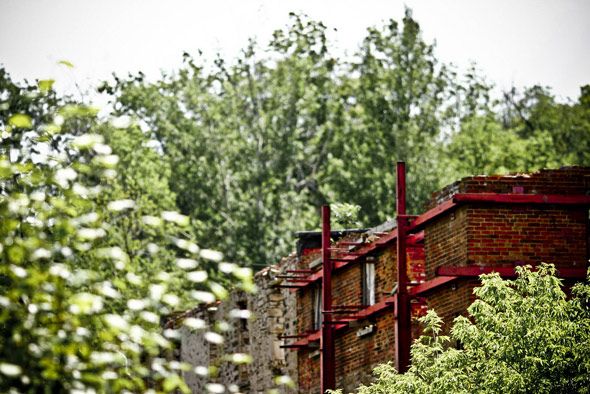 In fact, the aforementioned holding-structures were put in by this very group (in coalition with various historic interest-groups), so that by the time plans are properly implemented, the Mill still remains.

Since about 2003, the redevelopment artistic sketch has sat atop a pole near the road bordering the Mill; it depicts the plans for a 14-story condo as well as mixed-retail services. 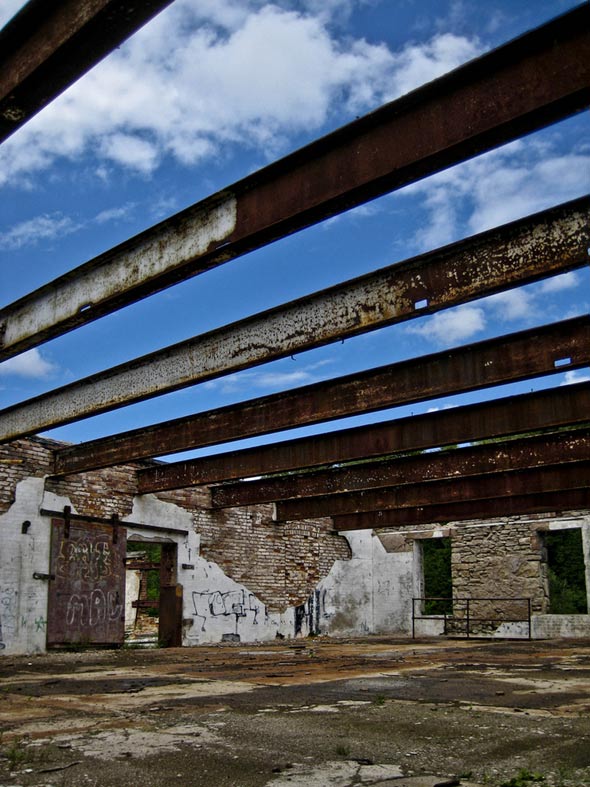 I was disheartened when I saw it at the site, but as places like this go, one cannot bite the hand that feeds them - the Quebecois owner wants to see these beautiful old buildings kept in some form, just as they are in his native province. Given the resources the gentleman and his company have already poured into the site, an aesthetic compromise is more than fair. 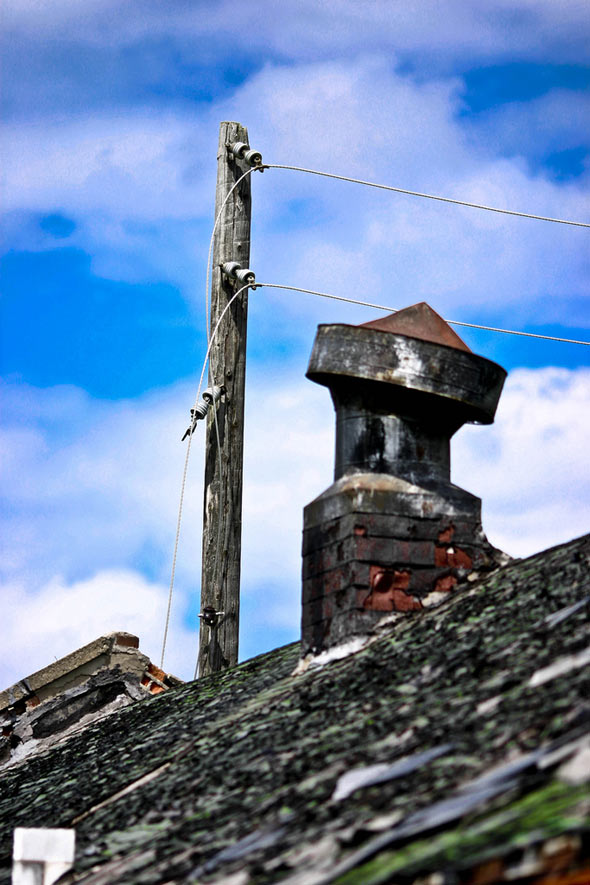 Once again, what tends to bother me is not the immanent future, but the recent past of this beautiful site: before the structural rehabilitation, it sat vacant for over two decades, becoming subject to vandalism, arson, and inevitably, Canadian winters.

The entropic deconstruction of the Barber Mill by nature and nurture (or lack thereof) places the observer at odds; at a certain point, one is bearing witness to beautiful decay, and from another point, given everything we've said, it is an observation of loss (even if by transformation). Like the immanent dissolution of the present, the 'always already' nature of a space which has lost its time is worth holding onto - even if by twisted metal hands.