One of my favourite books is How Buildings Learn by Stewart Brand, and this High Park home is a great Toronto example of that learning process--the way a house can change and evolve as we live in it.

Terry and Suzanne bought this house in 2000; the lot is wide, but despite its substantial appearance from the street, the house was only a total of 1800 square feet. By 2006, with two young kids, they realized they needed a different kind of house. "We really needed Mom and Dad space," says Terry. But they loved their neighbourhood and they didn't want to move. The solution? Teach their old house new tricks. 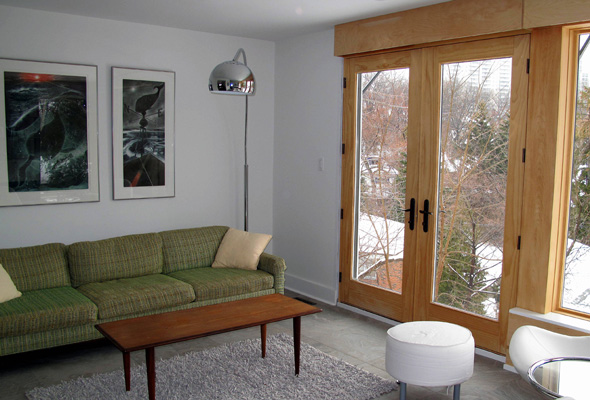 The first step was finding an architect who was interested in doing a green renovation; a mutual friend put Terry in touch with Carolyn Moss of Moss Sund Architects. "We bounced ideas off each other," says Terry. Their goal was to extend the living space of the house and build a new master bedroom and bath upstairs.

"The house is built on a slope, so we have this incredible view to the back. Before, there were only three tiny little windows here." The obvious space solution was to build onto the back of the house; to make the house feel larger and more open, Moss also redesigned the front entrance, complete with a green roof. 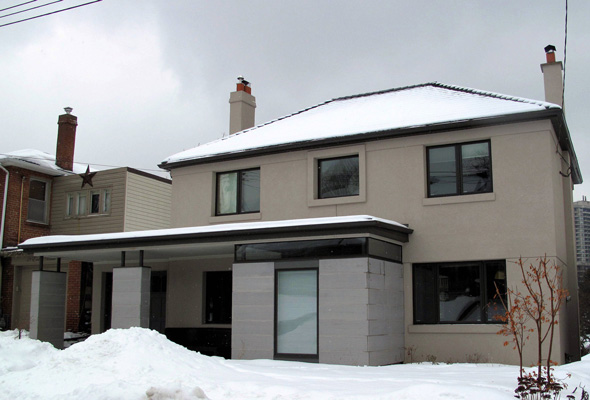 "It's not a huge addition--legally we could have a whole other house off the back. But the front took a lot of planning," admits Moss. They started discussion in May 2006, construction in April 2007; the family moved out from June to October, and lived alongside the final renovation work from October until May of 2008.

"I would have gone more modern, but my wife was very concerned about keeping the house appropriate to the neighbourhood," says Terry. The house gained a stucco exterior (this insulation changed the existing masonry from a R4 to a R18 rating), but the most radical change is invisible: there are geothermal loops buried in the front yard, which heat the entire house.

"It was an expensive process, converting," admits Terry, "but now we're only paying $1200 for electricity and heating per year. Before, it was $3500 just for the oil heating and the house was smaller then. When we moved in after the work, Hydro actually called us to say our meter must be broken, our bill had gone down so much." The province and the feds give a rebate for this kind of green energy conversion, totaling roughly $10,000.

The family is thrilled with their home's evolution, though Terry ruefully admits, "I would probably have made a contingency plan to stay out of the house longer. I'm sure everything would be finished by now!" The green roof and the rear deck won't be built until spring...because buildings tend to learn slowly. 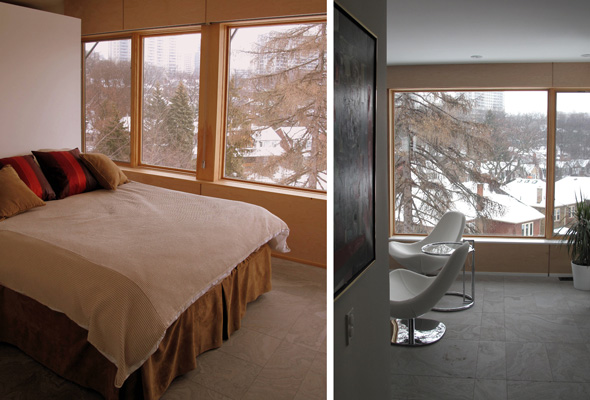 What do you love most about your home? "I like the back view best at night, in the winter. You can actually see the subway going by--the tracks are above ground, down the hill there...and in summer, it's just a green canopy."

What drove you crazy before the renovation? "There was this off-center closet window, it drove me crazy." Moss solved the problem by creating a new square window in the 2-storey entrance hall.

What's your favourite place in your home? "I spend most of my time here [the main floor extension]. The nice thing is, we haven't put a lot of furniture here because the heated floor is so great to sit and play on." The floor is Eramosa stone quarried in Ontario, heated by the front yard's geothermal loops.

What do you like best about the neighbourhood? "We're close to the shops--we don't like to drive, so everywhere, everything, is accessible. It's such a great community, so many schools. We're staying put."

What's most surprising about this home? "One of the things is--and I don't mean this in a critical way--is how little the contractors knew about green products. They were very willing to work with it, but Carolyn is a very green architect, and the guys on the floor, doing the work, just didn't have the knowledge base."

If your home were a kind of fruit, what would it be? "Something to do with light. Maybe a lemon? At certain times, the light streams right through. I told Carolyn I wanted the sun to penetrate as far as possible into the house."