Toronto's west side is currently going on 5 hours without power. The Star (the only major media outlet to get the full story out early) reports that the blackout started around 10pm when there was a flood in a power facility at Dufferin & Bloor. A short-circuit there managed to leave a massive chunk of the city without electricity. We're talking Queen West to St Clair, Jane Street to Spadina, almost completely in the dark.

With temperatures dropping to nearly -30 with the windchill overnight, it was hardly the kind of evening you want to go without heating either.

Sitting in the middle of it all at Lansdowne & Dupont, I lucked out. My building had power. I only realized what was going down an hour into it when I started getting calls from friends in blankets, reaching out via cell phone. At that point, I peeked through the blinds to see nothing but blackness on the street below (pictured above). Even the streetlight right outside my window was out.

There was only one thing to do -- I sent out an invite to all those I knew were affected, set up the futon and made some coffee. Most tried to stick it out at home, while a few realized they really wanted a warm shower before work tomorrow and caught a cab or bus over (as the TTC couldn't keep the Bloor subway line powered into the night).

Then the rest of the evening was spent keeping up to speed via Twitter and sending SMS updates to friends and family who were stuck wondering how long the chill was going to last.

Hopefully by the time you read this, it'll be morning and your clocks will be flashing 12:00, 12:00, 12:00. If, on the other hand, you're reading this at work while layering on the deodorant 'cause the power was still out at home... well, someone at Toronto Hydro seriously has some explainin' to do.

How did you survive the night? Let us know. Hey, and if you photographers out there managed to get some interesting long-exposure shots out your darkened windows, post them to the blogTO Flickr Pool. This dramatic shot was submitted by funkaoshi: 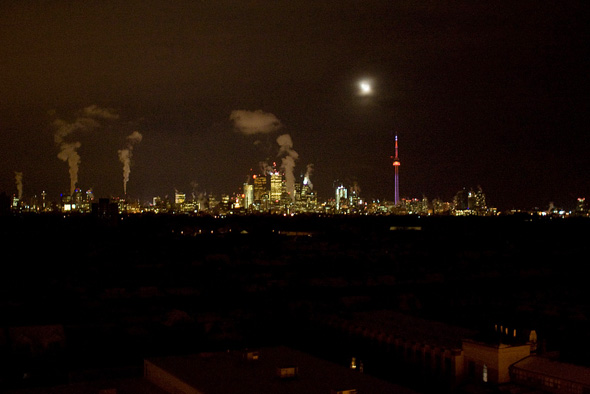