The Candy Factory on West Queen West has the sweetest moniker of any condo in the city. The building has legendary status as the first real Toronto loft conversion, in part because of real estate maverick Harry Stinson's struggles to get financing for his renovation vision. Nearly a decade after the building opened for residents, the lofts are holding up pretty darn well.

I used to be crack-addicted to fizzy Rockets, and I like to imagine the candies being produced in this very loft when the Ce De Candy Company was in operation here. Jodi doesn't disabuse me of my fantasy, but she says was initially interested in living here not for the building's sweet past, but because of its location and light.

What: Candy Factory Loft on Queen West
Who: Jodi (exec. administrator with CAHP)
How much: $200,000.
Layout: loft with open bedroom up a half-flight of stairs.

Unlike a lot of Toronto lofts, this building really profits from its original structure: there's a variety of window shapes, all sorts of different floor plans, and the great solid factory structure has been stripped down to solid beams made of fir, and brick. As a loft should be, Jodi's home is amazingly bright.

"I like these windows, this view," explains Jodi, "because when I grew up in Vancouver, our house had a big picture window over-looking the sea. I've never liked dark Victorian homes." 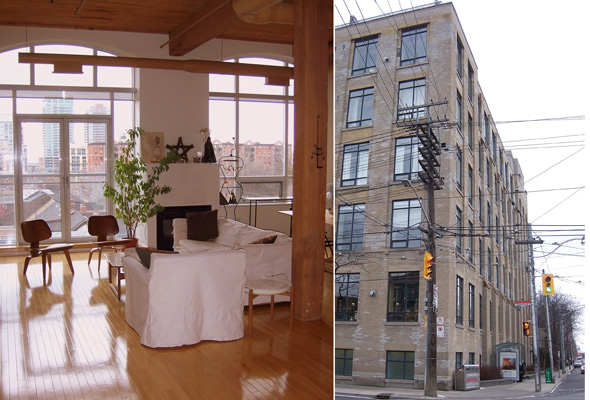 I didn't think a home on Queen Street would make me rethink the importance of light in a home. But Jodi's relatively small loft in the Candy Factory faces south, with arched windows and a 12-foot ceiling, and even on this grey December day, soft light pervades all parts of the space. "It can be really sunny. At night, the feel is quieter, softer."

The view is an unexpected feature: though we're only in the middle of the building, in the distance, we can see waves on the lake; the Gardiner traffic is moving, far enough away that it seems like a child's toy racetrack; close-by, the nearby house rooftops make for a calm residential feeling. "I love seeing the houses," says Jodi. "A lot of immigrants started here, Italians, Portuguese, and though a lot have moved, or they're aging, still, the streets feel good, it has a neighbourhood feeling."

For her own space within the Candy Factory, Jodi has made only one noticeable change to the original floorplan: she converted the hall closet into an effective office space. "The loft came with all these stupid doors--give me a break! I took them down." She installed her desk, some artwork, and lighting in the resulting niche off the hallway.

She's glad to live here. "There's a real range--empty nesters and renters and some very creative people. I can walk to a bunch of art galleries if I'm bored, and it take me two seconds. That has really built up since I moved in....[but] 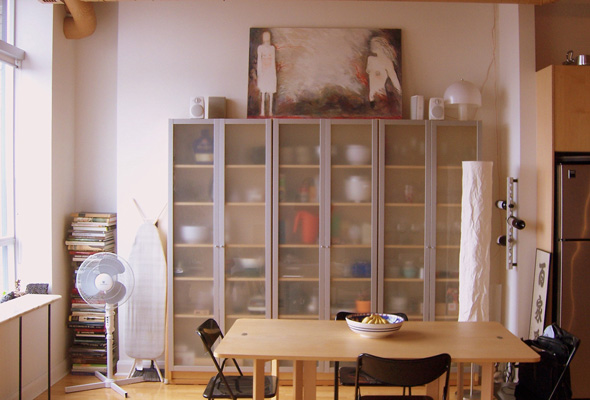 Swan has always been there, and across the street there's Artscape and their great wild garden. And I love that I can walk to work." 6 Home Questions:

What do you love most about your home? The location!

What drives you crazy? Physically, it's that they renovated the building so you have to go up a flight of stairs to get to the lobby and the elevators.

What's your favourite place in your home? My office, because it used to be a really frustrating clothes cupboard. My second favourite place is the couch...except it's my mom's couch, I have to give it back.

What do you like best about the neighbourhood? It has changed a lot since I moved in, but the street still has its characters.

What's most surprising about this home? How different it looks during the day and during the nighttime.

If your home were a kind of food, what would it be? The thing that comes to mind is an orange. There are a lot of segments in an orange.