The Toronto media landscape is definitely changing, with things printed on paper seemingly being most affected.

Not long ago, Torontoist pointed out what appears to be a cutback of distribution of the National Post in the city. Boxes have gone empty for quite some time.

And now it would appear that this may also be the case for the Toronto Star. blogTO reader Carrie M. sent us the above cell phone snap, which delivers some bad news to readers. 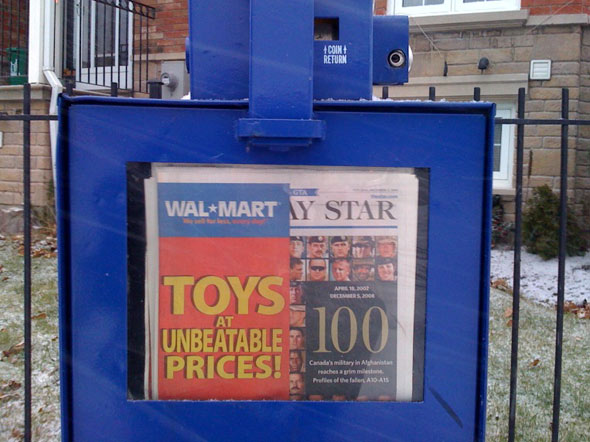 Just last week I happened upon the above scene: an advertisement from retail giant Walmart that takes up more than half of the paper's selling surface (you can't even read the headlines!).

Does this suggest desperation on the part of Torstar? That ad would have to be a serious cash cow to warrant covering the paper. Or does Torstar really need the cash flow... so much so that they're willing to sell their front page?

Of course, this might just be premature speculation rearing its head. Or not. We'll see.

In related news, CBC and Globe and Mail are joining CTV in implementing cost cutting measures during the economic downturn. Quebecor is likely to follow suit, one might surmise.