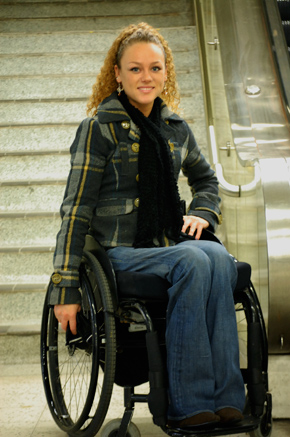 What do you 'do'? I'm a University of Waterloo student taking a co-op program in International Political Science and I also work for the mayor of Waterloo. I belong to a sorority, Kappa Kappa Gamma, where I also do a lot of volunteering; philanthropic work.

How long have you been in Toronto? Just moved here in September.

I broke my back four years ago when I was 18. I was involved in a traumatic accident that severed my spinal cord. I only severed it 90% so I can still stand on one leg which most people wouldn't notice. Another thing that most people wouldn't notice is that I'm actually 5'9 and before I broke my back, I did some modeling which is why I love volunteering for fashion-related events. It's really hard to get back into modeling when you're in a wheelchair but I've done some print work and educational videos for the University of Waterloo and I try to stay involved.

Since I broke my back in grade 12, I didn't graduate until after I healed from breaking my back. I went to West Toronto Collegiate which was a crazy gong show compared to school in Sudbury. After that, I looked around at different universities. I come from a family of Queen's graduates and really wanted to go there but it didn't look like it was very accessible for wheelchairs. I decided to go to Waterloo for their co-op program which has been the best choice, ever. In my second year, I found out that I could apply for a specialization and decided to do International Trade which only 15 people per year are accepted into. This summer, I worked as a Youth Advocate for a week at the UN in New York City. Since I broke my back, I've had a lot of opportunities. Before, I was just stuck in Sudbury.

The Gong Show clubs. I'm a big clubber even though I'm in a wheelchair. It's actually funny because people recognize me from the different clubs I go to. I'm pretty much one of the few people in a wheelchair that goes around to the different clubs, I guess. I dance like crazy and I love to meet people and go out with my friends. I've met Paris Hilton twice and Lauren Conrad from the Hills. Oh yeah, I also got bitch-slapped by a crazy Lindsay Lohan fan once, too.

Wheel-Trans. I'm disabled so I have to use Wheel-Trans. The drivers treat me like I'm extremely disabled. I can push myself onto the platform and unlock myself but they get so mad when you try to do anything. They yell at me when I try to do that. It's awful. I get treated like I'm so disabled. I grew up my whole life not being disabled and I'm not even that disabled - I can push myself and I can do whatever - but I get treated like that wherever I go by the drivers.

Obviously, it depends on what time of year it is but if it's in the summer...I'd get up as early as possible to make it out to Vaughan, just as the doors of Canada's Wonderland open. I'd spend as much time as possible there and make sure to try out the new Behemoth ride and my all-time fave, Xtreme Skyflyer - the bungee jump swing thing)! While we are there, we can eat a breakfast of funnel cake and a lunch of funnel cake with ice cream! For dinner, if we are sick of funnel cake - is that ever really possible? - we'd go somewhere fun and casual like Jack Astor's at Richmond and John. They have awesome apps and frozen raspberry beer! Since we're already there, it's always fun to catch a movie or even just take a ride on the never-ending escalator at the Scotiabank Theatre! The movies end around 10:30 or so - just in time to hit up a club in the area. Embassy or Circa are definitely awesome places to dance the night away. Circa might even have a celebrity DJ spinning! And you can't leave Toronto without a drunk after-clubbing stumble into Fran's.

If it's gotten too cold for Canada's Wonderland, I'd swap that idea for Yorkdale Mall. You can definitely spend the entire day there and Pickle Barrel would be perfect for lunch. Too bad they don't have funnel cake there, too! For a mid-shopping snack, Cultures in the food court is a must! I cannot live without eating their strawberry frozen yogurt, at least, once a week. We can also get our clubbing clothes at Guess or Marciano for after-dinner at Ultra Supper Club where they turn the dining room into a dancefloor! Hopefully, we'll catch a celebrity there since it's the kind of place they like to make appearances at.

It's kind of embarrassing and personal but I can't feel when I have to pee because I'm paralyzed in my bladder but it still works. You know that feeling when you're tapping your feet and you just have to go pee? I'll never ever have that feeling again. I pretty much have to time it out - when I have to go to the bathroom - and I have to watch how much I drink.