Today, all over the downtown core, students were seen banding together to make a difference. Students from post-secondary schools from all over central Ontario congregated at various rendez-vous points such as OCAD, UofT, and Queen's Park. They then all met in and around the UofT campus all for one central and common goal - to lower tuition fees across the nation and to offer affordable education to all.

My adventure started at OCAD's welcoming Butterfield Park, where eager students held small pep rallies began, which began with students from the OCAD Student Union speaking about the issues that were inflicting their lives and lowering their quality of education. 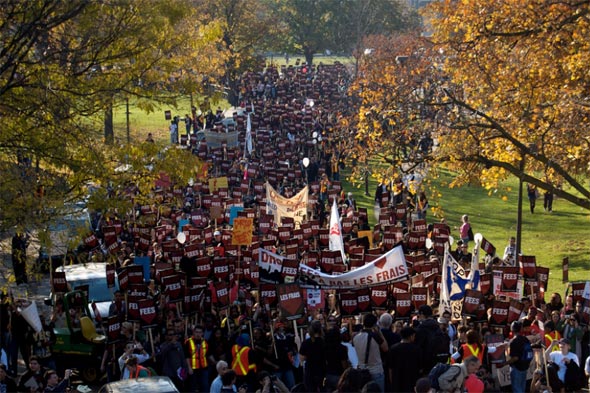 Eric Bear Ludwig, an industrial design international student of OCAD from Florida, speaks out to everyone about the issues he faces as an international student. Beyond having to find housing for himself completely without help from the school, he also faces the burden of having to pay tuition three times as much as domestic students pay. Eric urges the government to aim to lower all fees and not just domestic student fees, as they are extremely high.

Once UofT Mississauga had arrived the students of OCAD and Mississauga campus marched up to UofT to meet with fellow brothers and sisters of debt burdened lives. As energy heightened on the march up Beverley Street to UofT, passersby weren't able to ignore the students' presence, with loud chants that could be heard a kilometer away.

As our mob of dissatisfied students began to amalgamate with the other schools such as Ryerson, UofT St. George and Trent up at UofT. The slew of students then began to grow exponentially. At that moment York U arrived almost simultaneously and chants of anger at the government grew. If one looked across the vast green of King's College circle they could see the giant group of York students stretching across the road now dominated by students instead of cars.

The now massive and intimidating group of students all cheering for lower tuition fees and debt free education began to buzz and hum with anticipation of their great march around town to show the city and nation that they want something changed!

As the group followed the leading pied piper truck with activist students from Ryerson chanting as loud as they can, I managed to grab another student for some words. Denelle Kennedy, another OCAD photography student is appalled by the prices she and many other students across Canada have to pay. Even being a domestic student the average two term year costs over $5000 and on top of that there are art supplies which can sometimes amount to $1500-$2000.

When asked about some solutions to this crushing debt, she says, "I think free education; let's model after Europe. If we're supposed to be a country of Britain, why aren't we modeling after them?" Perhaps this is a solution. The idea is that the country should understand that taxes put in the right place can really help to heighten the quality of our country through education. 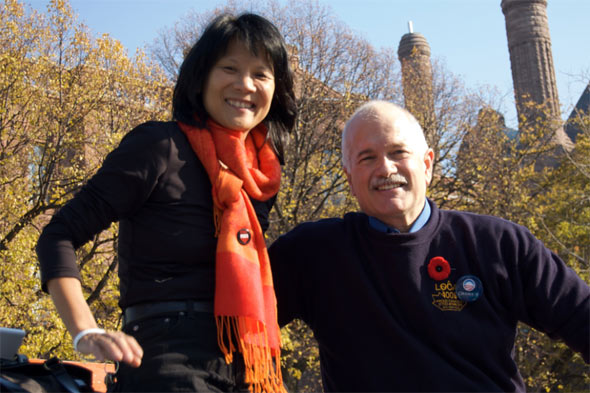 This brings me to my so savored opportunity to chat with Jack Layton and his partner Olivia Chow, who also made an appearance on the Ryerson bandwagon. As I was heading back home to edit the photographs I collected, I saw Jack and Olivia being interviewed by an independent newscaster and stopped to get some words in myself. I had asked Jack about some solutions he hopes to put forth in the House of Commons to lower this debt that is crushing many students dreams. He replied kindly that he is the opposition and does not always have the pull to make the changes, but that he hopes he can see some changes in the future regarding the student debt crisis.

I also asked him about raising taxes, much like how European countries have, to offer lower cost or free post-secondary education to our citizens. He stated that it just wouldn't work to raise taxes, because people just cannot afford it right now, but that relieving some other money spending issues, such as subsidies that are granted to banks should be withdrawn and put forth to much more important means such as education for the country. To have the opportunity to talk with him was a great insight to this issue and helped me see and hopefully spread the word that there are solutions to this issue.

It makes one wonder how crooked our economy has become to put more money into "businesses" that do not exist so much in our very own country, than to place it right in the hands of our fellow citizens who are here, learning to make changes and bring light to our futures. It would be nice, as a common student, to see tuition prices freeze, or even drop to manageable levels. I am hoping to see some more things change in my generation and to see those changes passed on and succeeded by other changes for the better. I also hope that this helps others, who are not so well informed about this issue, understand that there needs to be something done! Students' debt are just getting higher and higher and something needs to be done, so lets this be a beginning in a forwards step in educational funding in the great white north of Canada.

Above writing and photography by guest contributor Dillon Scheenaard.

Update: For even more photos of the rally, check out those taken by Miriam O.